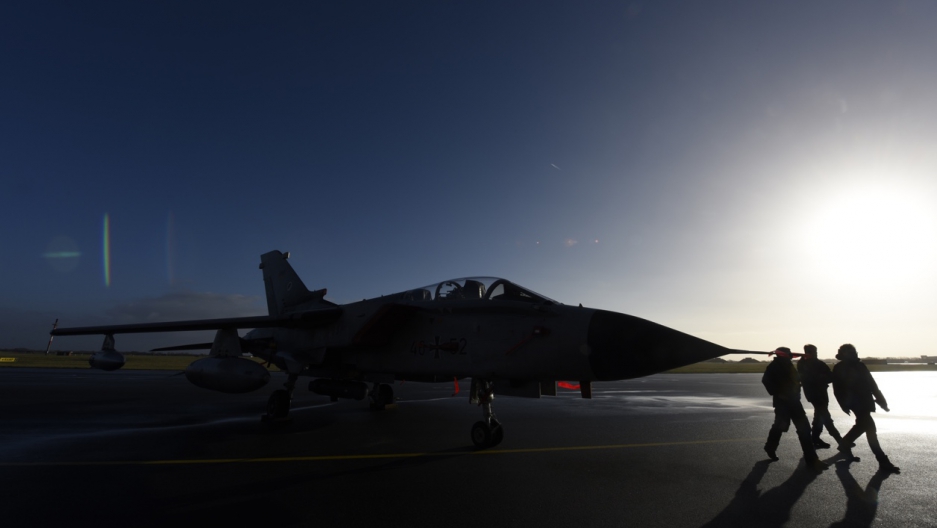 A Tornado aircraft during a presentation at a German army airbase on Dec. 4, 2015. The German parliament approved government plans to deploy up to 1,200 soldiers, Tornado reconnaissance jets, refueling aircraft and a frigate as part of the military campaign against Islamic State.
Share

Another day, another country enters the war in Syria. Germany, which followed the United Kingdom by a couple of days, voted today to join the military campaign against the Islamic State.

Unlike the United Kingdom, however, Germany won’t actually be bombing the country, only facilitating the bombing for others. It will send some surveillance planes, a warship to protect a French aircraft carrier, refueling planes, and some 1,200 military personnel.

There are now some 60 countries participating in one way or another in the conflict against the Islamic State in Iraq and Syria. The UK and Germany entered the fight after being spurred on by France, which called on EU countries to play a more active role after the Paris attacks in November that killed 130 people.

Most of these countries have been reluctant to send in ground forces. But as the war drags on and the Islamic State continues to hold on to major cities, that may begin to change. US President Barack Obama has agreed to send as many as 100 Special Forces soldiers to Iraq. Those troops will have a mandate to also carry out raids inside Syria. And US Secretary of State John Kerry said earlier this week that airstrikes alone would not be enough to defeat the Islamic State.

The Syrian conflict is going on five years now. It started when the Syrian government brutally crushed a peaceful protest movement. An armed rebellion arose, civil war erupted, and extremists took advantage. At every turn it’s been hard to imagine how the situation could get worse. The world always finds a way.

The United States is again debating what to do after another mass shooting. This debate could last a few days, or even a few weeks, but eventually — if this time is like all the other times — the issue will be forgotten and nothing will be done.

But there are things that could be done. Australia, the United Kingdom and Finland are countries that have all made dramatic changes to their gun laws in the wake of a mass shooting. And they have all seen positive results.

After a mass shooting in 1987, Britain passed the Firearms Act of 1988. It made registration of shotguns mandatory and banned semi-automatic and pump-action weapons. Firearms amnesties netted thousands of weapons and rounds of ammunition.

Australia is the most common example offered. After a gunman killed 35 tourists at a port in Tasmania, it took the conservative Australian government just 12 days to pass bipartisan legislation that enacted sweeping gun control.

A massive buyback program yielded more than 600,000 semi-automatic shotguns and rifles, roughly one-fifth of the firearms in Australia. The laws also outlawed private sales, required that guns be individually registered to their owners, and mandated that buyers present a "genuine reason" for purchasing the guns. One study found that the new laws reduced firearm suicides by 74 percent and gun-related homicides by 59 percent. Australia hasn’t had a mass shooting since.

Australia had to increase taxes, however, to afford the buyback program. It’s hard to imagine that going over well in the United States.

Opposition to Russian President Vladimir Putin is coming from a surprising section of the population: truckers. These tough long-haul drivers have historically supported Putin, who has carefully fashioned a reputation of being fairly tough himself.

The truck drivers are protesting the imposition of higher tolls on the highways. It’s not so much the toll, but their hunch that the money from the toll is likely not being used in any way that would benefit the roads or the drivers.

The company collecting the cash, after all, is partly owned by the son of a close confidant of Putin.