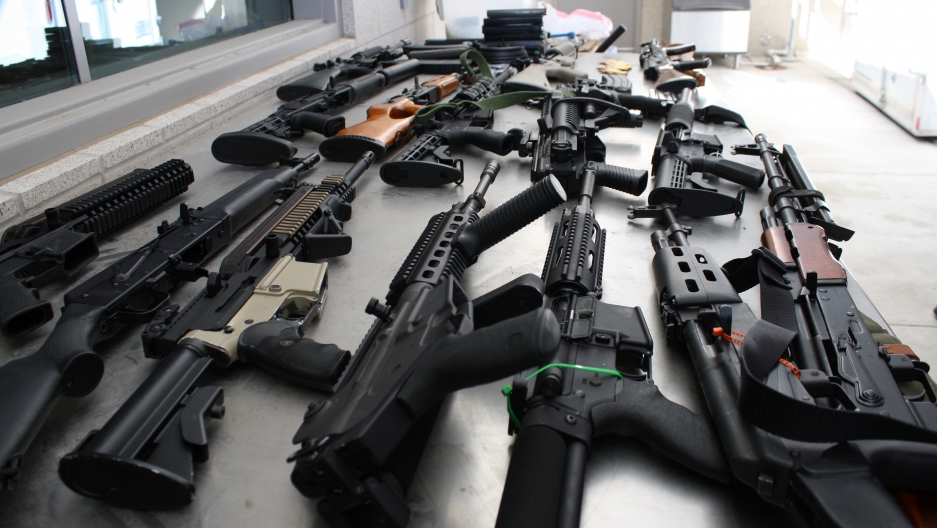 A cache of weapons seized from a vehicle from an outbound examination at Del Rio International Bridge on February 1, 2011. US customs agents in Texas seized 14 high-powered assault rifles when they searched a car heading into Mexico, and arrested the driver.

US Customs and Border Protection/Reuters

In Mexico, there's a slang term for AK-47 assault rifles. They're called cuerno de chivos, or goat's horns, because of the shape of the magazine.

"They're very very popular," says journalist Angela Kocherga, who's covered the US-Mexico border and Mexico for 20 years. But unlike many states in the US, assault rifles aren't legal in Mexico. They're smuggled in and end up in the hands of Mexico drug cartels.

"In some cases they're able to get the weapons that come through the US, often bought in border states and smuggled across the border piecemeal," says Kocherga. They're also smuggled across the Central American border into Mexico from other countries. "So really, from both of Mexico's borders, the cartels are able to bring in weapons."

The paradox is that Mexico has some of the strictest gun control laws in the world. Kocherga says there's only one legal gun store in the entire country. "It is run by the military. It's based in Mexico City, the capital, and it's very, very tough to get a weapon — so most people do not go to that store." But that doesn't deter criminals involved in Mexico's drug trade. Assault rifles and guns are readily available on the black market.

"I've covered a lot of the drug violence along the border in Mexico and clearly there's no shortage of weapons." Kocherga saw a lot of it in Ciudad Juarez during the peak years of the drug trade violence there. And it primarily involved assault rifles and guns. "Hit men were going around killing people en masse, in public places, birthday parties, malls. That is something that was a very painful part of Mexico's reality during that time."

The US government is trying to crack down on the southbound flow of weapons into Mexico with more searches for weapons and bulk cash. But the border remains porous. "People can get around it. They can smuggle between the ports of entry. They can look where there aren't US authorities doing these periodic checks." Kocherga says often drugs from Mexico come in cars in hidden compartments and going back south with weapons and cash. "The methods used to move weapons out of the country and into Mexico are the same ones used to bring drugs across the border into the US."

South Africa affords another lens through which to view the tragic events in San Bernardino, California. The country sees more than its own fair share of gun violence.

“South Africans are quite shocked by mass shootings like this,” says South African journalist Kim Cloete.  The violence and crime that plague her home city, Cape Town, are typically a different kind of violence. “You know they’re very familiar with crime, they live with it every day. We’ve got a huge problem, a huge gun culture problem here as well. But mass shootings are something quite alien to South Africans.”

Cloete says other forms of gun violence that are rampant in and around Cape Town include family murders, murders related to witchcraft which may involve two to three victims, and organized gang crime — but “nothing like the mass shootings that you have in the US and the fear that that invokes.”

Despite the disturbingly high number of mass shootings that have occurred in the US in the past year alone, Cloete says South Africans don’t regard America cities as more dangerous than their own.

“I think there's a worry about terrorism, especially since the World Trade Center terror attacks [on Sept. 11, 2001], but I don't think they see the US as a dangerous place.  I think they see it as far better off than South Africa, simply because people here are affected by crime, not by mass shootings, but by crime almost on a daily basis. It's very top of mind, the high crime rate. And I think they almost see the US as a great break. People love to go there to get away from the violence.”

Gun violence and gangsterism in South Africa is terribly unsettling, says Cloete, because it undermines community life. “There’s just very strong feeling that this crime has to stop.”