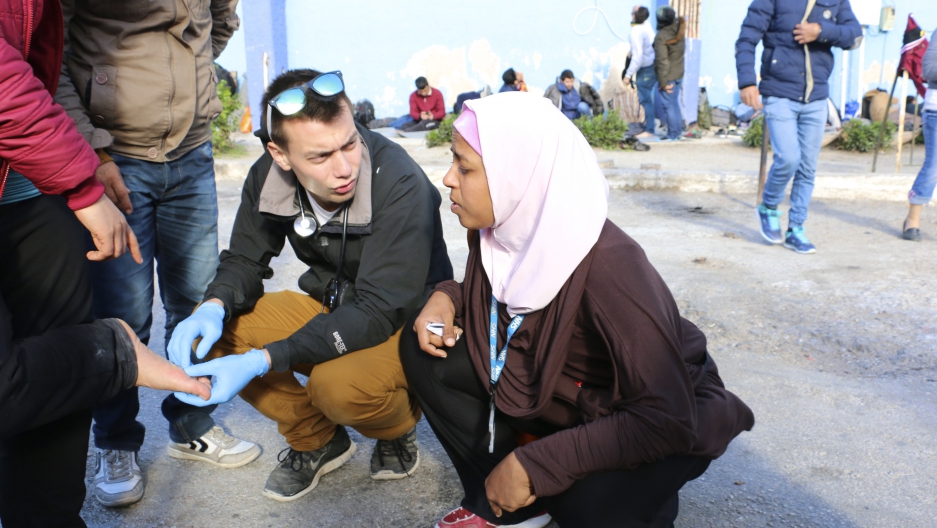 Siyana Shaffi, 45, a doctor from the UK treats a refugee patient who waits in the November cold for a ferry to mainland Greece.
Credit: Laura Dean
Share

LESBOS, Greece — Siyana Shaffi is everywhere. One day she’s advising the caterer who brings food for the refugees on how best to season the rice pudding, paying attention to the flavors that are common in the refugees’ home countries. The next she’s driving a van to pick up mattresses for the medical tent, or handing out baby food to refugee mothers at the port, where they wait to board the ferry to the mainland.

“I feel really really useful,” says Shaffi, a 45-year-old general practitioner from London who has been on Lesbos for four weeks. She quit her job with the British National Health service in August and since then has been looking to pursue more humanitarian work. Though she has been very active in fundraising for other causes, in particular when the tsunami hit her home country of Sri Lanka, as a working mother of four this is the first time she’s managed to take time away to volunteer.

“It’s been amazing, really really good as well as really really bad,” she says. “It’s bad that these things are happening and to see it up-front and close is eye-opening. But being here on the ground meant I could actively do things, sometimes very small things like giving a piece of food to a child, sometimes big things like splinting someone’s arm in four places or resuscitating people who are about to die.”

She says the generosity of people here, refugees and volunteers alike, has touched her.

“It’s great seeing people who are really not self-centered, among refuges too. They’re really looking out for each other and … looking to do what’s best for not just them but for their community.”

As for the volunteers, “they are more selfless than I could ever imagine them to be. There’s a family I’m working with, a daughter who has been here for two months, a father who has been here for six weeks and the son was also here. They’re Mormons, it’s funny these Mormons and Muslims working together.” Shaffi herself is a devout Muslim.

But in their rush to care of others, volunteers in particular sometimes forget to take care of themselves.

“The rat race has kind of started to affect volunteers a little bit, this bravado of going sleepless: ‘I slept two hours in 48,’” she says, imitating a common sentiment on the island. “The first rule of first aid is, ‘look out for danger for yourself because without you no one else is going to benefit.’”

She has just come from the bedside of a volunteer who got into a car accident while working.

“The young man I’m treating in there is the same age as my daughter, I told him, ‘I’m not leaving you for a moment.” Siyana Shaffi, 45, a doctor from the UK treats a refugee patient who waits in the November cold for a ferry to mainland Greece.

In a situation where there is so much need, it can be difficult for the helpers to stop helping.

“People like this often need permission to take breaks and care for themselves. Once you give them that permission the onus is on them to press pause.”

Shaffi says she takes care of herself by making sure she has the time to pray.

The locals, too, are very involved in supporting migrants and refugees.

“One of the most touching things I saw happened just yesterday. I went to the graveyard where the drowned victims are being buried. It was one of the nicest things, I saw the local Greeks had been placing fresh flowers on the graves. One was there offering her sympathies. It was really touching. And the crane digger was digging the holes for the graves so the [refugee] men didn’t have to do it all by hand. It was in a local olive orchard.”

Greeks, particularly on the islands, have been taking care of refugees arriving on their shores for years. But in the last 12 months, the numbers have become so large that they’ve been unable to cope on their own.

Shaffi muses that because of the cultural similarities, the warmth of the locals, and the mild climate, Greece may not be the worst place for refugees from the Middle East to linger for a while before continuing their journey.

She says even the authorities here seem more understanding than they are elsewhere.

“In Greece we’ve had a lot less [police violence] than we have everywhere else. I think it’s because the local people … genuinely feel for the refugees.”