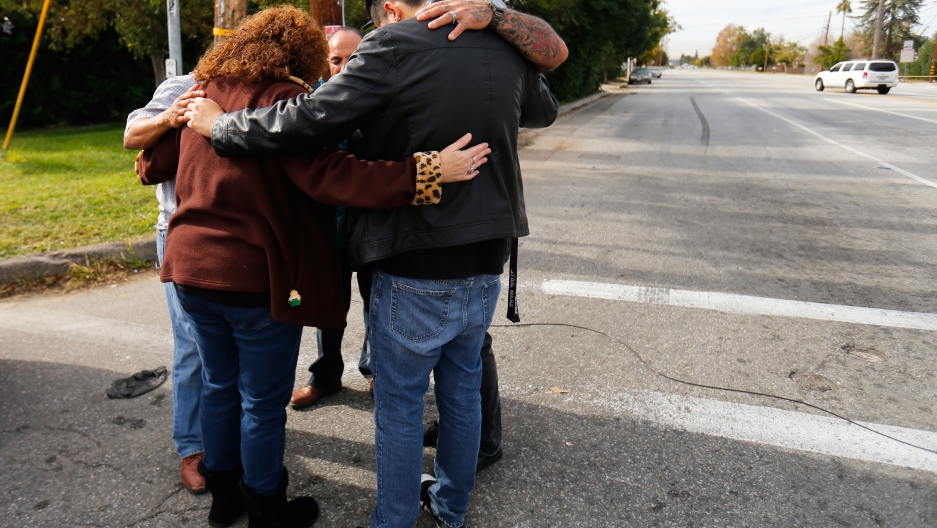 Local residents as they wait to return to their homes near the scene of the investigation of an SUV where two suspects were shot by police following a mass shooting in San Bernardino, California December 3, 2015.

Police still won't discuss a motive in Wednesday's mass shooting at a Southern California social service center for the developmentally disabled that left 14 people dead and another 21 wounded.

Suspects Syed Farook, who worked at the center, and his wife, Tashfeen Malik, both died in a violent confrontation with police Wednesday night. The suspects had four guns and fired almost 150 rounds between their initial attack on the social services center and in their altercation with police. San Bernardino police said they later found a dozen pipe bombs and an additional 5,000 rounds at the suspects' home.

All four guns were purchased legally. 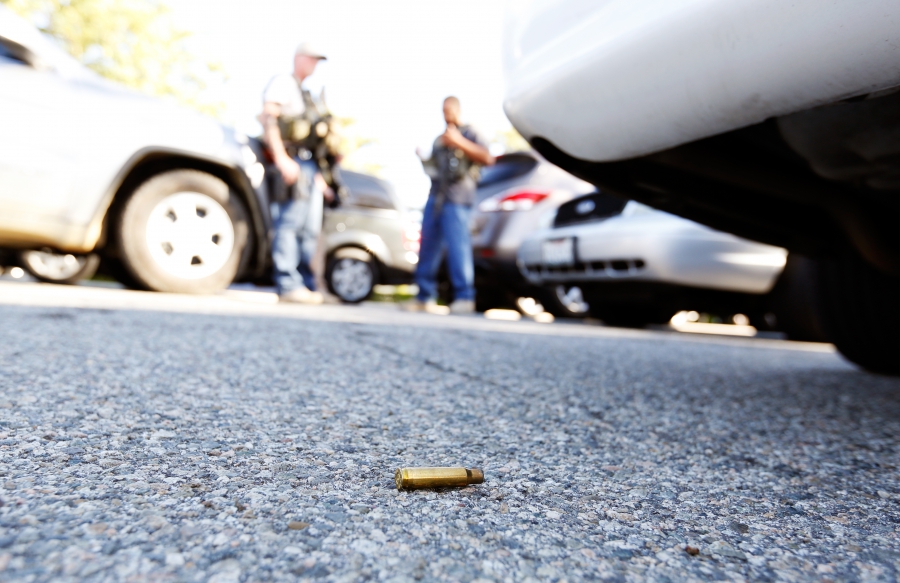 A spent cartridge lies on the ground as police officers secure the area after at least one person opened fire at a social services agency in San Bernardino, California December 2, 2015.

"They came prepared to do what they did as if they were on a mission," says San Bernardino Police Chief Jarrod Burguan.

So far, most of the victims have been identified and names would begin to be released publicly later Thursday. FBI assistant director David Bowdich, who leads the Los Angeles field office, said "this is not your average investigation." In searching the suspects' home, police recovered a number of USB drives, cell phones and other digital media they hope will provide a clue to the motives of the attackers, neither of whom had any previous criminal record.

The target was a holiday party being held at a government facility that served people with developmental disabilities. Farook was at the party before the altercation and left, apparently after some sort of disagreement. People locked themselves in their officies after the gunfire erupted.

But at least one person at the scene who survived got a look at the gunman and recognized him as Farook — providing a crucial lead to police. 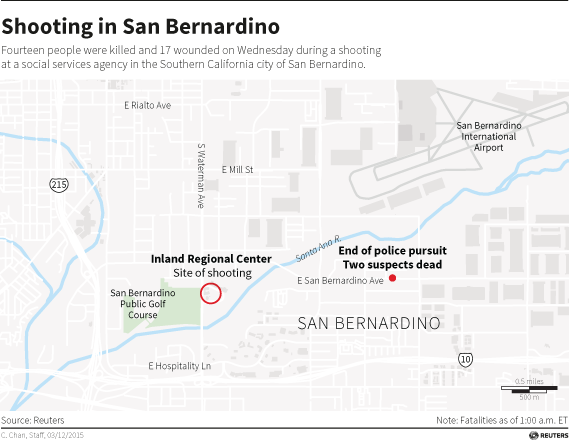 Saul Gonzalez of KCRW in nearby Santa Monica grew up near San Bernardino. He decribes it as a city of contrasts. "Driving here, you pass these road signs of 1960s America, these old bowling alleys and coffee shops that are so Route 66. And next to them you have the halal shop and the carniceria."

It's one of the poorest cities in California, and in the United States. But "it's also a place where new immigrants can find a foothold in the US and start getting their piece of the California Dream." People can afford to get an apartment or maybe a house, which they might not be able to do in San Diego or LA.

San Bernadino's population is growing fast. It’s twice what it was 20 years ago.

"It's an interesting alchemy of problems, but also opportunity, particularly for newcomers."

The Los Angeles Times reported that one survivor, 24-year-old Kevin Ortiz, had been shot twice in the leg and once in the shoulder during an attack. But he still managed to call his father and his wife of two weeks to say he was alive. “Kevin said he had been shot three times and that he was in pain but he was all right,” his wife, Dyana Ortiz, 23, told the newspaper. "Then he said ‘I love you’ and I said ‘I love you.’”

Jennifer Goren contributed to this report.

Readers, how often do you think about the possibility of a shooting in your daily life? Let us know in the comments section below.