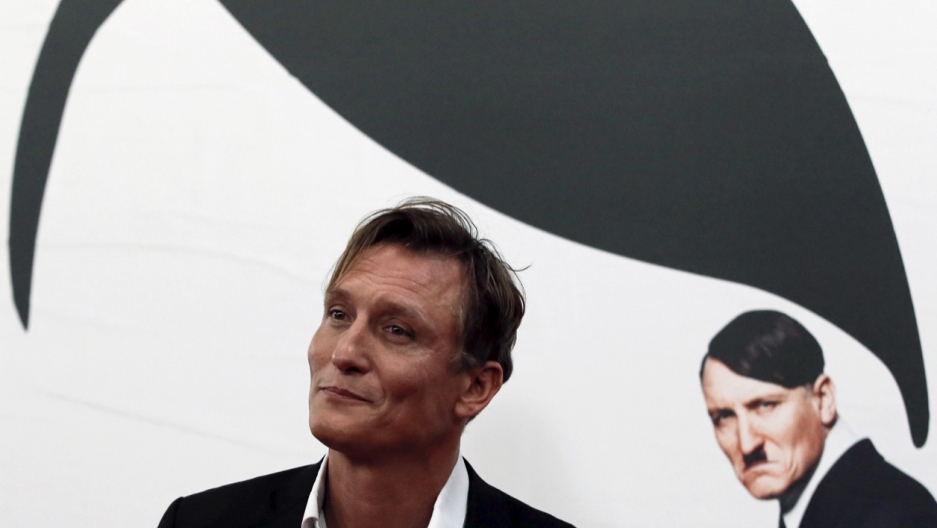 Actor Oliver Masucci on the red carpet at the world premier of "Look Who's Back" in Berlin, Germany, Oct. 6.
Credit: Fabrizio Bensch
Share

MUNICH, Germany — Of all the movies to climb the charts here, an Adolf Hitler spoof might seem the least likely option.

But eight weeks in, a deadpan comedy featuring one of history’s most murderous dictators has become one of the country’s most popular hits.

Based on a best-selling 2012 novel, “Er ist wieder da” (“Look Who’s Back”) imagines what it would be like if Hitler woke up in modern Germany and morphed into a media sensation.

Having raked in more than $20 million so far, it’s the second-highest grossing German film of the past several months.

It sounds like director David Wnendt was going for an awkward sort of laughter. “It should be the type of laugh that catches in your throat and you’re almost ashamed when you realize what you’re doing,” he told the Guardian shortly before its release in early October.

Predictably, the movie has also raised a debate over what role — if any — the infamous Nazi ruler should play in popular culture.

Some commentators have bashed the film as poorly made and morally dubious, while others have gone a bit easier on it.

Jurgen Zarusky, a researcher at the Institute for Contemporary History in Munich, says the movie’s popularity is potentially a sign that people are exploring new ways to treat the past.

“Humor gives it distance,” he says, adding that Germany has usually treated its historical memory strictly as a “heavyweight” issue.

“Maybe it’s a kind of exercise to create another relation to the topic,” he says. “The question is whether it is being done well, and whether it’s premature.”

The movie does reveal some uncomfortable truths.

Part of it was filmed as a Borat-style mockumentary, with the actor playing Hitler approaching ordinary Germans in public to strike up conversations.

Wnendt says he was surprised how well the faux dictator was received. He suspects that signals a broader shift to the political right among the German public.

Visitors at the #Munich Documentation Center for the History of National Socialism.

“How can it be that so many people react positively to Hitler [and] accept him?” he told the TV network ARD.

That’s particularly troubling given the severity of Europe’s recent refugee crisis, and terror attacks that far-right groups have seized on to express their hatred and fear of foreigners.

Even before the latest wave of refugee headlines, movements like PEGIDA, a vocal anti-Islam group in Germany, were already gaining popularity and staging high-profile protests earlier this year.

More from GlobalPost: A year on, Germany's PEGIDA is radicalized by the refugee influx

Still, researcher Zarusky notes that Germans have staged huge counter-demonstrations and pushed back against groups like these.

“Whenever such a phenomenon shows up in the political sphere, you can be sure that there will be a reaction,” he says.

But that doesn’t mean all is well.