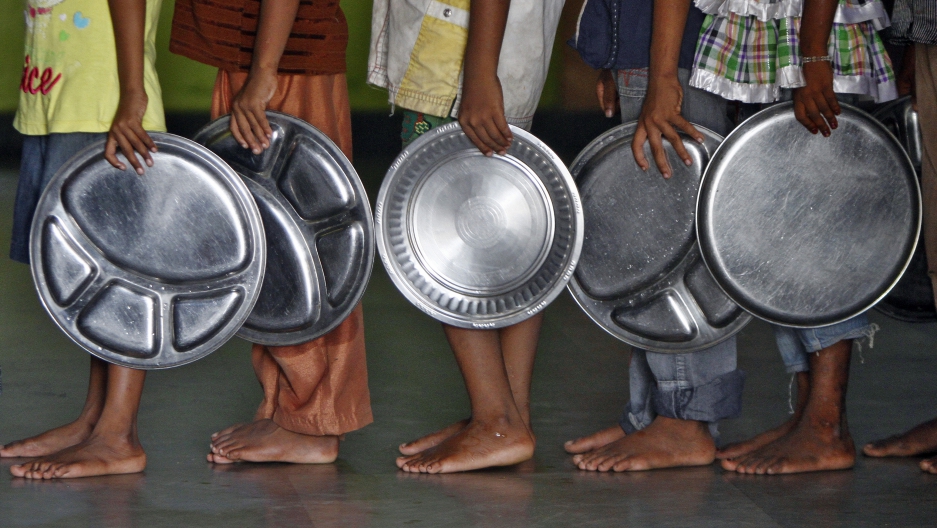 Children holding plates wait in a queue to receive food at an orphanage run by a non-governmental organisation in the southern Indian city of Chennai.

Today is billed as Giving Tuesday, a 24-hour push for us to turn away from shopping and to think about charity instead. It’s proven to be a lucrative marketing opportunity for nonprofits. Last year’s event reportedly brought in some $46 million for charities, up from $28 million in 2013.

For many years, I have been interested in how and why we give, and what kind of impact our good intentions have on those we seek to help. My interest began when I was working as an Africa correspondent for The World, seeing with my own eyes how difficult it was for organizations to have lasting impact on the ground.

So I launched the Tiny Spark podcast in 2011, in order to investigate well-intentioned ideas more closely and to see how we can have greater impact with our donor dollars. We just launched our Guide To Good Giving, a three-part miniseries in which we speak to thoughtful people about how we can all become more effective donors.

Over the past few days, I have also been fielding questions from some of you on The World’s Facebook, where Kathy Correia wrote, “When you donate, there's concern that the majority of your donation will go to the organization's ‘overhead.’ I would like a tool that helps sort this out.”

Correia is not alone in her concerns about overhead. Several of you asked about it, and 41 percent of respondents in a recent Chronicle of Philanthropy poll said high compensation for a charity executive would keep them from donating to an organization. However, The Chronicle’s editor, Stacy Palmer, says concerns about overhead can be misguided. “We want (nonprofits) to have great management systems. They should have excellent computers. They need wonderful people who are talented and compensated well. Not huge amounts, but compensated well enough to not want to go into the private sector.”

Mauricio Gonzalez asked on Facebook for resources on effective charities. “My main concern is to find a trustful organization that will direct my donation to the right people. Can you recommend a few?”

There are a couple of organizations that vet charities; others offer different ways to give:

2. GiveWell assesses a much smaller number of nonprofits but with great rigor.

3. GlobalGiving is a crowdfunding platform for good causes around the globe.

4. GiveDirectly enables donors to give cash directly to the world’s extreme poor.

With all the problems in the world and so many potential causes to support, it’s easy to feel overwhelmed. I spoke to nonprofit advisor and Columbia University professor Doug White for guidance. He doesn’t advise people to support causes out of guilt. “The person has to be close to the cause that the charity is promoting in his or her heart. That’s the root of why we have a charitable instinct in our hearts. To abandon that would be pointless. So the first question that one should ask is what turns me on? What do I really care about?”

Charlie Bresler, executive director of The Life You Can Save, has a definite opinion on that one. His nonprofit promotes the idea that all lives have equal value. It urges donors to give to causes and regions where their dollars will have the most impact. “There is an enormous amount of suffering everywhere in the world, including the United States, Canada and Mexico,” Bresler acknowledges. “The question is: how can you do the most good with your charitable dollars? And that’s what we are asking people to think about.” The Life You Can Save recommends a number of nonprofits working in developing nations.

Stacy Palmer takes a more measured approach to the global versus local conundrum. “You can take part of your money and give it at home, and then think about the rest as perhaps giving abroad,” she says. “I think donors ought to think about it like a portfolio. You know there are some things that you do because they are important to you, there are some things that you think are important for the good of the world. And it’s not only your money that you can give, but sometimes it’s your time.”

Whether it’s volunteering or writing a check, Giving Tuesday focuses on being charitable one day of the year. Palmer says it’s better to give smaller donations across the entire year. “Nonprofits need to run all year around,” she says. “They often have cash shortages in March because nobody is thinking about giving, and that’s not good for the nonprofit. A really thoughtful donor would give at other times of year when the rest of the world isn’t giving.”