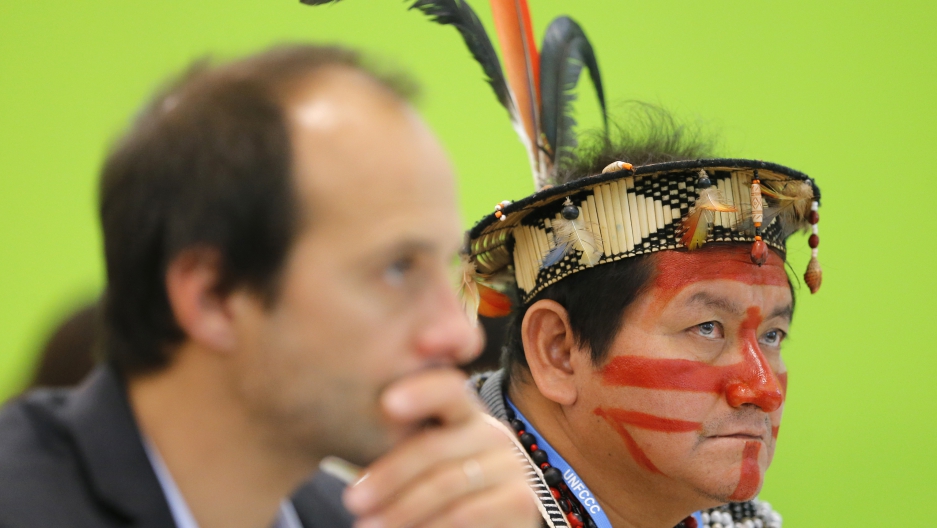 Though he warned that “getting 200 nations to agree on anything is hard,” President Obama insisted on Tuesday that an international agreement on climate will be reached before the end of the UN climate conference later this month.

“I’m sure there will be moments over the next two weeks that progress will be stymied and everyone rushes to write that we are doomed,” Obama said, repeatedly stressing America’s leading role in the climate talks at a press conference at the OECD in western Paris. “But I’m convinced we’re going to get big things done.”

North of the city, at the Le Bourget airfield, dissonance between the optimistic pronouncements of leaders of “developed” countries like the United States, France, United Kingdom and Germany and the more critical words of “developing” nations like India, China, South Africa and Brazil affected the tone of the first days of the conference.

Indian Prime Minister Narendra Modi took the lead in championing the developing side of the economic divide in Monday’s plenary speeches that opened COP21.

“The prosperous still have a strong carbon footprint and the world's billions at the bottom of the development ladder are seeking space to grow,” Modi said, framing the speech in terms of “climate justice.”

“It is not just a question of historical responsibility, they also have the most room to make the cuts and make the strongest impact. And climate justice demands that with the little carbon space we still have, developing countries have enough room to grow,” he said.

Concern from developing countries that is not in their best interests to limit fossil fuel consumption without significant compensation from developed countries continues a debate that went unresolved in Copenhagen in 2009, where participating states fell short of a significant climate deal.

While there is compelling evidence that Paris is different, with emissions reduction pledges from 180 countries already on the table, a far more engaged China and climate skepticism waning globally, it’s clear that developing countries will continue to push hard for larger financial incentives from wealthier nations in exchange for tempering use of fossil fuels.

The New York Times reported Tuesday that such economic considerations could get in the way of a meaningful deal in a story called “Narendra Modi Could Make or Break Obama’s Climate Legacy.”

Obama, who has been trying to forge a relationship with Modi on climate that reaches the level he achieved with Chinese President Xi Jinping last year, included developing nations in his remarks but did not tout progress with India.

“We seek an agreement that ensures developing nations have the resources they need to skip the dirty phase of development, if they’re willing to do their part, and makes sure the nations most vulnerable to climate change have resources to adapt to the impacts we can no longer afford,” Obama said.

Obama, Modi and Xi — who represent the “culprits of carbon,” met on the sidelines of COP21 on Monday, the AP reported. Obama’s efforts to reassure developing countries have been hampered by the fact that the GOP-dominated Congress “is blocking the first installment of the $3 billion he pledged to a UN fund to help developing nations transition to cleaner energy and cope with the effects of climate change.”

The ubiquitous Modi is pressing forward on many diplomatic fronts, flexing India’s economic muscles. That included announcing a major solar energy initiative on Monday in partnership with French President Francois Hollande, with support from more than 100 countries. The initiative will be hosted in India and seeks to raise $400 million from various states and development organizations to add significant solar capacity by 2022 and beyond.

Flanked by giant screens playing a highly produced, buoyant video heralding the dawn of solar power, Modi referenced his Hindu faith — also the faith of the large majority of Indians — and venerated the role of the Sun God in daily religious life. And yet the current of inequality also ran through the brightly choreographed launch.

"The vast majority of humanity is blessed with generous sunlight round the year. Yet many are also without any source of power,” Modi said. “Countries with the biggest solar energy potential represent only a small part of global solar electricity production.

At OECD, President Obama’s tone remained optimistic, in line with experts and advocates here who believe a substantial deal remains likely. At the same time, it’s also widely agreed that even a historic deal would be just the first step in a decades-long process to keep emissions in check while also addressing interrelated environmental crises on land and sea.

“We have accomplished a lot here and I have high hopes that over the next two weeks we will accomplish even more,” Obama said. “It’s hard to come up with a tougher problem than climate change. But I think we’re going to solve it.”