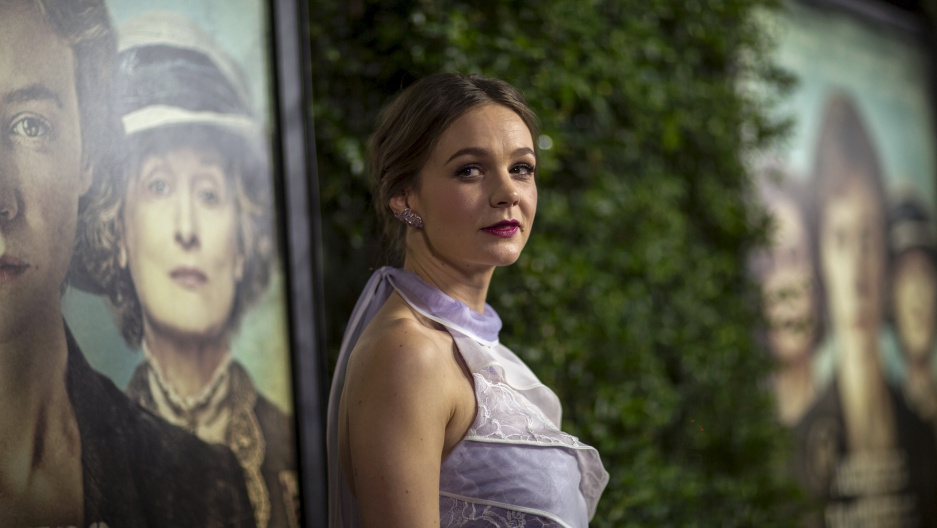 Cast member Carey Mulligan poses at the premiere of "Suffragette" in Beverly Hills, California October 20, 2015. The movie opens in the U.S. on October 23.

In the 2012 US presidential election, just 53.6 percent of eligible voters went to the polls. The United Kingdom did a bit better when it held national elections last May: About 66 percent of the electorate turned out.

So many of us take the right to vote for granted, and the new film "Suffragette" seeks to change that perspective. The film chronicles a group of pioneering British women who staged increasingly-violent protests for the suffragist cause in the early 20th century.

Emmeline Pankhurst's great-granddaughter, Helen Pankhurst, says that her great-grandmother's radical activism didn't happen all at once. Rather, she says that it was a slow build of frustrations and delays that led her to the suffragist cause.

“It’s important to see [the movement] as a gradual ratcheting up, both by the women themselves and by government,” says Pankhurst. “It isn’t a single act by them, it’s following years and years and years — I can’t repeat it enough — and years of broken promises. What you had was the women trying to get a voice, trying to find a way of being heard, and the government increasingly stopping them from using any legal mechanism for being heard.”

The women of Great Britain didn't gain the right to vote until 1918. In the proceeding years, the suffragists became increasingly militant in their movement for equal rights.

“Gradually, the whole thing became more and more vicious,” says Pankhurst. “Well, it was more vicious on the government side, and more willing to take anything and to keep pushing the boundaries on the womens’ side. I think there is a fundamental difference between the extremism and the kind of violence that we hear about today and what they were doing.”

When it comes to the film and the portrayal of her great-grandmother, Pankhurst believes Meryl Streep did Emmeline's legacy justice.

“I think she was fantastic,” Pankhurst says. “Emmeline was an icon and remains an icon, and here’s Meryl — an iconic actor if there ever was one, and such a strong feminist; such a strong person in her own right playing this role. The two fuse together beautifully.”

Sarah Gavron directed “Suffragette.” In many ways, she says she sought to tell a story that had not been fully told.

“That’s why we were so keen to bring it to the big screen — because it was such a huge social movement and made such an impact on history,” says Gavron. “It seemed time to tell this story. We were very aware that we wanted to make it a good piece of cinema and a good watch. We felt the way to do that was to connect the audience emotionally and tell a human story that people could relate to.”

To tell that human story, Garvon and her team centered the film around a small group of women, and the character Maud Watts, played by Carey Mulligan, in particular. Though Meryl Streep’s character is based on a real person, Gravon used many fictionalized characters — including Maud Watts — to make the story more relatable and accessible.

While the women in the film are designed to be relatable, many of the male characters are portrayed as brutes that trivialize the suffragette movement and feel that they own women and their bodies — something that was essential to advancing the plot of a militant movement.

“You have to live a life of subservience to understand there comes a point where people will say enough is enough,” says Pankhurst. “In any social movement, people will accept the daily grind and daily injustice, and then there comes a point where they say no. That point isn’t the point at which most of the oppressors will understand and accept that moment, so you do have to have this shifting of social norms and individual people's perspectives. That’s what this film shows.”

While the film focuses on a particular story, Garvon says that “Suffragette” also serves as a commentary on the struggle faced by the larger women’s movement.

“They suffered a lot, and they were satirized and ridiculed by the press,” she says. “There are some amazing cartoons and postcards that were released showing sort of grotesque looking women and the horrors of women who wanted to be emancipated, and how crossing the line that was. I think what was really striking was how they were shamed.”

Though this story tells the struggle of women from generations past, Garvon argues that it has also helped to advance the modern dialogue surrounding feminism and women’s rights, and she hopes that young women and girls can connect with the film to keep the movement going.

“I want them to realize how hard fought for these rights are, how recently they were won, how precious they are, and how important it is to stand up and be counted,” Garvon says. “I hope that they are empowered to speak out and to challenge current inequalities. In the states, particularly, it’d be great [if the the film] encourages people to use their vote.”