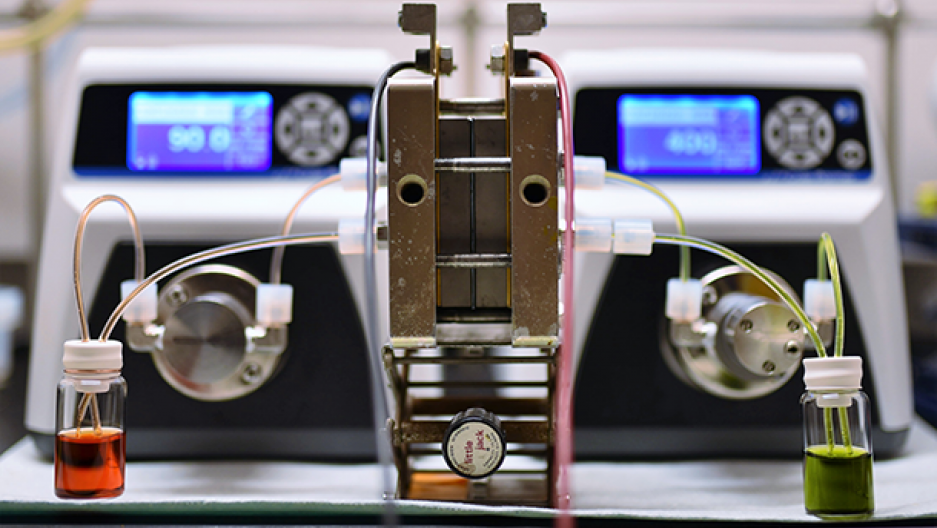 The alkaline quinone flow battery. This laboratory test uses only about 5mL of the electrolyte solution, which has a power capacity of only a couple of watts. But it can easily be scaled up. The power of the battery is limited only by the storage capacity of the positive and negative tanks.

With renewable power becoming more common, researchers are increasingly focused on figuring out how to safely store and discharge large amounts of energy. Expensive lithium-ion batteries don't do this well. Flow batteries, on the other hand, show a lot of promise — and a new design from researchers at Harvard University may represent a major breakthrough.

Last year, these same Harvard scientists unveiled a flow battery — nicknamed the rhubarb battery — that stores energy in vats of inexpensive chemicals. Now they’ve improved upon this design with a battery that uses non-toxic chemicals and is cheap and scaleable, the research team says.

“Think about running your home on the electricity from your rooftop solar panels that you get during the day,” explains Michael Aziz, professor of materials and energy technologies at the Harvard School of Engineering and Applied Sciences. “You need to be able to run that battery for hours before it’s drained. Traditional solid electrode batteries are drained within an hour.”

You could stack up banks and banks of batteries to get more energy, Aziz says, but this quickly becomes prohibitively expensive.

Flow batteries are different. They work by separating the energy storage aspect of the battery from the electrode interface that releases the energy or charges the battery. Separate tanks contain solutions of positive and negative electrolytes — chemicals that can store and transmit electricity. The amount of power the battery can generate is limited only by the size of the tanks.

Expensive flow batteries using precious metals, like vanadium, have been around for years. Last year, the Harvard team figured out how to replace the vanadium in the negative solution with a quinone, a chemical compound fairly similar to one found in rhubarb. But there were problems with the chemicals on the positive side.

“The other side of the battery used last year in our lab is based on bromine,” says Roy Gordon, the Cabot professor of chemistry and materials science at Harvard. “Bromine is a toxic and corrosive material — not something that you’d want to have in tanks in your basement. So we replaced that with a chemical that is much safer; it’s actually a food additive called ferrocyanide.”

“Cyanide” may sound scary and dangerous, but this compound is not poisonous, Gordon adds. He and the team believe it is safe to have in your basement or in your neighborhood. But switching to ferrocyanide created an additional problem: Unlike the previous battery, this chemical prefers an alkaline, rather than acidic, environment.

A postdoc named Mike Marshak, who was working on the project and is now an assistant professor of chemistry at the University of Colorado, discovered that quinones could, in fact, be made soluble in an alkaline solution — and that opened up the world of alkaline electrochemistry, Aziz explains.

Professors Aziz and Gordon envision that this technology will be cheap, safe and can be made small enough to power a single-family home, or big enough to power an entire community. Aziz estimates it will take about three years to develop commercial systems ready for scale.

But there’s also the possibility, he says, that the new, non-corrosive chemicals “might just serve as a drop-in replacement for much more mature flow battery systems that are now using electrolytes, but that are just too expensive to make it big.”

If it works out that only a small amount of re-engineering is required to accommodate the new chemistry, the technology could be in the marketplace much sooner, Aziz adds.

For Gordon, the flow battery and its new system ranks high on the list of exciting discoveries. “If our future is going to be sustainable, as a civilization, we need to be able to solve these [energy] problems,” he says.

“This is certainly the most exciting thing I’ve worked on,” Aziz says, “because the implications are so global. The greatest challenge facing humanity this century —I’m convinced — is finding the energy to power a civilization of 10 billion people without unacceptable consequences to the environment. Renewable energy is front and center in that challenge, and this could really be a very significant enabler of renewable energy.”