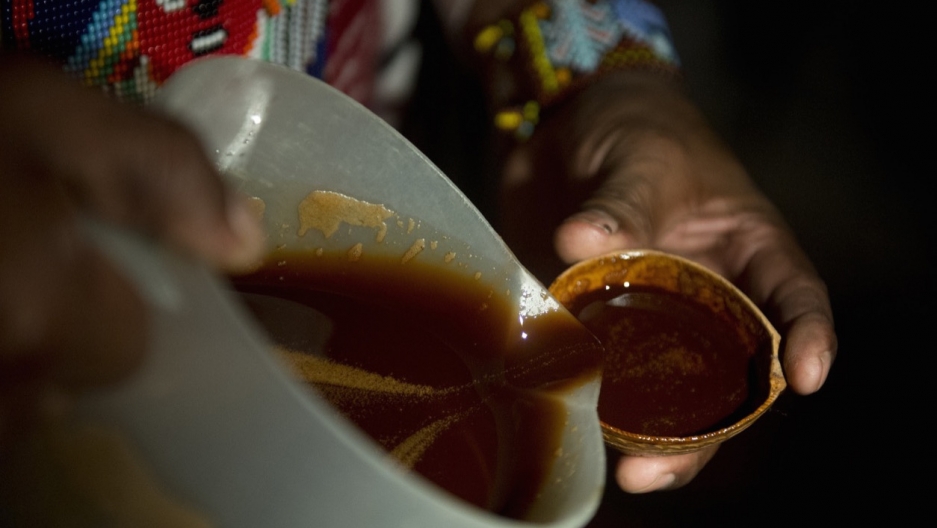 PHNOM PENH, Cambodia — It was a weird place. The landscape was perfectly flat and seemed to stretch for thousands of miles in every direction. There were no trees, not a blade of grass, and the air was dry. But it wasn’t a dead place. The sky was something else. It was churning with a million shades of color, chewing on rainbows and dribbling ever more luminous hues.

I didn’t know it at the time, but the visionary liquid I had ceremonially swallowed a few hours before was creating “a landscape to explore and unleash what has been trapped in the subconscious region of the brain,” according to researcher Julie Megler.

Megler and other researchers say it can heal a host of mental pathologies like depression, addiction and post-traumatic stress disorder (PTSD).

Brewed from rainforest plants and vines, ayahuasca has been used by Amazon tribes since time immemorial. It has numerous names in various languages. “Many people [call it ‘mother’] because they experience contact with a female entity that is like an embodiment of ayahuasca,” explained Adrian Bear, an ayahuasca shaman from South Africa living in Cambodia. “Although some tribes say that ayahuasca is male … and some people say that it is an aspect of the snake.”

Its use has surged in recent years. Ayahuasca has more than a few celebrity samplers, including Lindsay Lohan. Now United States military veterans are trying it to heal from the deep psychological trauma of war.

Its legal status is ambiguous. Active ingredient DMT was banned — along with other hallucinogens LSD, mescaline and psilocybin — in 1971 under the United Nations Convention on Psychotropic Substances. But DMT occurs naturally in plants, animals and, not least, the human brain. So, rather than outlaw the substance outright, governments banned anything containing DMT at a higher rate than it occurs in nature. Scientists don’t know why we have DMT in our brains.

Ayahuasca is made by brewing two plants together, neither of which are illegal. A shot of fully prepared ayahuasca is not subject to the 1971 convention. But because it contains DMT, a “schedule one” substance (i.e. what officials deem unsafe, highly addictive and illegal to create or distribute), a case for prosecution could be made. While some religious groups have won the right to consume ayahuasca in the United States, taking it there is not without risk. In the UK, where my session took place, the brew is illegal but authorities tend to turn a blind eye.

“The local authorities are aware of what we do,” said the rogue therapist who was leading the session. “But they leave us alone because we’re quiet and don’t disturb anyone.”

Ayahuasca use is ceremonial in nature. When the practice was exported from the South American jungle, indigenous rituals were included and merged with other spiritual flotsam from the Western consciousness.

During my ceremony, held, improbably, in an English country house, traditional Peruvian chanting was played on the stereo. Later it was Gregorian chants.

I expected a certain amount of strangeness. But I was still perturbed when a demon sidled up, poked a thin straw into my gut and started sucking down my life energy. A vast terror overcame me.

It pushed a straggly, greasy strand of hair from its face. “Steve,” it replied.

“Steve?” I was incredulous. “As in, Steve the Demon?” It nodded. I felt the laughter bubbling up inside. I’d never heard of something so ridiculous. I rolled back, hooting and slapping my thigh. The laugh fell on him like salt on a slug. He withered and disappeared.

Scientific evidence suggests that episodes like Steve the Demon are more than just trippy nonsense. Some neuroscientists say they're actually visions of a brain healing itself. Like Jessica L. Nielson, postdoctoral fellow at the University of California, San Francisco: “It sounds like [a healing],” she said via email, after I'd told her about Steve. “Especially if it helped you to no longer be triggered by what that demon represented.”

To this day, it’s unclear exactly what the demon represented. But the sense of empowerment gained from its defeat has remained.

“In a recent observational study, 18 participants traveled to Peru to undertake three ayahuasca ceremonies over the course of a week,” said Dr. Brad Adams, from the University of California, Los Angeles' Psychology Department. “By the six-month mark, depression scores had dropped by an average of 52 percent.” The study, undertaken with Drs. Charles Grob and Dennis McKenna, may be repeated with new participants before being submitted for publication.

“It put me back into a balanced place, and it was beautiful,” says Ryan LeCompte, a retired US Marine lance corporal, in a video testimonial about a separate ayahuasca experience. “This understanding came over me, and the plant, or whoever it was, said ‘get up and enjoy the moment.’”

So powerful was LeCompte’s experience that he set up Veterans for Entheogenic Therapy in order to help other veterans, including those returning from the US wars in Iraq and Afghanistan, gain access to the medicine. (The term “entheogenic” means something that induces a spiritually enlightening, mystical or consciousness-altering experience, and is used instead of “psychedelic” in some circles.)

Because so little is known about how ayahuasca works, there is little scientific debate. In addition to Adams’ yet-to-be released study, another study with 12 participants is being planned by the veterans' group and the Multidisciplinary Association for Psychedelic Studies, a Santa Cruz, California nonprofit research group that promotes psychedelic drugs as medicine.

Don't expect to find it at your pharmacy anytime soon. It would need to clear a bunch of hurdles, including rigorous clinical trials, and perhaps a cultural shift in societies suspicious of mind-altering jungle cures. US Food and Drug Administration approval would be difficult — and if it ever happened, the ceremonial vibe might not carry over so well. “The FDA would probably want to put this into a pill,” said Nielson. “But those in the traditional ayahuasca communities think that this takes away from the spiritual component of the healing process … it's hard to predict how [the approval] process will be navigated when the time comes.”

And what if raising traumatic experiences actually makes them worse? Many have that fear when considering a session. I certainly did. And it’s not groundless fretting, either, according to Bia Labete, an anthropologist who’s authored several books on ayahuasca. “There is a potential for re-traumatizing the patients,” she said. “However, as there are promising potentials too, it should be scientifically investigated.”

Some people have died taking a trip to the ayahuasca heartland. Young backpackers who travel to South America in order to search out spiritual enlightenment are especially vulnerable. Indeed, in recent years, two bodies were dumped in the Peruvian jungle by unscrupulous men claiming to be shamans.

Ayahuasca can also be dangerous for people with heart conditions. “DMT can also raise blood pressure and heart rate,” according to information from UK drug educational group Talk to Frank. “And may harm those with a pre-existing heart condition.”

The effect was also noted by Dr. Rick Strassman, author of “DMT: The Spirit Molecule,” during a series of studies in the 1990s.

There have been no gold-standard studies on the interaction of DMT with antidepressants and anti-anxiety medicine. Invariably, providers and shamans insist on a complete medical detox of any pharmaceuticals before allowing people to take ayahuasca.

Such is the worry about the potentially toxic mix that the Ethnobotanical Stewardship Council (ESC) was set up to encourage responsible use of the medicine and also to deal with “metaphysical safety issues.” However, one critic said the organization aims to “tacitly impose and intervene upon ayahuasca shamanism with dramatic commercial and messianic visions.”

Inside ayahuasca ceremonies, it’s not uncommon to encounter beliefs in extraterrestrials, witchcraft and clairvoyance. Under the drug's influence, these things can seem not just real, but as blindingly obvious as gravity.

For me, the trip contained many visions of a religious and spiritual nature, and the lasting effects were similar to that of long-term psychotherapy.

LeCompte plans to continue to take PTSD-suffering veterans to the jungle. Why? Because it works.

“Ayahuasca is much better than any medicine I can prescribe,” said Dr. Sue Sisley, a psychiatrist, formerly of the University of Arizona, who has treated PTSD for 20 years. “Patients actually go into remission which never happens with other treatments.”