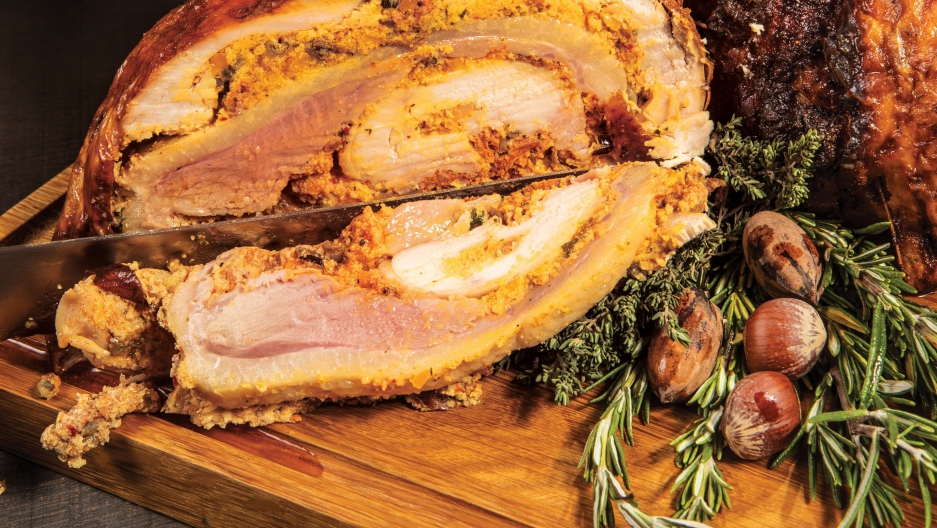 For many Americans living overseas, celebrating Thanksgiving is a must. But as Marisa Kaplan can attest, maintaining this tradition abroad comes with certain challenges.

The Pennsylvania native says last year, for instance, was a debacle.

Kaplan decided to host a Thanksgiving meal for 50 people at her friend Lungi’s house in Johannesburg, South Africa.

“It was very international,” Kaplan remembers. “[There were] people from all over: South Africans, but also people from Europe and the US.”

Kaplan used to live in Johannesburg herself. But she had just moved to Cape Town, which is two hours away by plane.  Kaplan planned to arrive in Johannesburg on Thanksgiving morning, have the groceries delivered to Lungi’s house, and then begin cooking.

One problem: Kaplan forgot that there are no fresh turkeys in South Africa. You have to buy frozen ones.

“It was maybe a couple of days before I was going to fly up,” Kaplan says. “I ordered the groceries online and I realized by the time they would be delivered, there wouldn’t be enough time for the turkey to defrost.”

So Kaplan came up with a new plan. She decided to buy both a turkey and a turducken (a deboned chicken, stuffed into a deboned duck, stuffed into a turkey) in Cape Town. She would put the thawing birds in the overhead compartment, so they would continue to defrost on the flight.

Kaplan arrived at the airport with the meat packed into two cooler bags with blocks of ice. “I got a lot of people asking [me], ‘Are you a heart transplant surgeon?’”

One South African traveller even overheard her American accent and jokingly said, “What’s in there? Is it a turkey?”

“I was like, yes!” Kaplan recalls. “I think he was shocked.”

Kaplan got to Lungi’s house and started to prepare dinner. Then something very South African happened: All of a sudden, all of the lights went out.

In South Africa, there’s not enough electricity. It’s a big issue for people. The power company deals with this by shutting off the electricity to certain neighborhoods to ease the load on the system. It’s called load shedding — basically, a scheduled rolling blackout.

Kaplan says the electricity was going to be out until 6 p.m. — when her 50 guests were scheduled to arrive.

So Kaplan popped into the car, put the turkey in the front seat and the turducken in the back, and frantically drove around Johannesburg trying to think of someone who might have power.

Mike lived in a bachelor pad with an oven he had never used before. “When [I] got there, it was still encased in plastic!” Kaplan recalls.

Mike was dating a new girl ... and they were still in bed when Kaplan charged into the apartment, ripped the plastic shrink-wrap from the oven, and crammed both her turkey and her turducken inside.

Miraculously, Kaplan says, she finished the cooking and made it back home in time to host Thanksgiving. And the power had come back on.

“It was really wonderful. We had a lot to be thankful for.”

This year, though, Kaplan’s not taking any chances. She’s checking the load shedding schedule ahead of time.