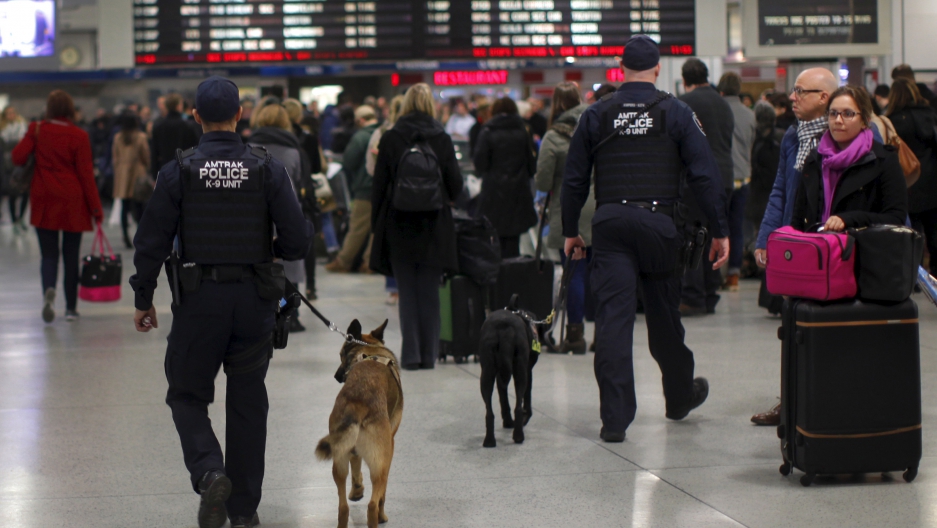 Amtrak Police K-9 teams patrol a busy Pennsylvania Station in the Manhattan borough of New York City, November 25, 2015, one day ahead of the Thanksgiving holiday in the US. Millions of Americans embark on their annual Thanksgiving travels on Wednesday, one of the busiest travel days of the year.

Americans, or at least many of us, are already off and running to a long holiday weekend. It’s traditionally the biggest travel time of the year. And that prompted President Barack Obama to offer some reassuring words earlier Wednesday.

“As we go into Thanksgiving weekend, I want the American people to know that we are taking every possible step to keep our homeland safe.”

The president also mentioned the Paris terror attacks, acknowledging that it’s normal for Americans to have security concerns right now as they prepare for Thanksgiving activities. “Right now, we know of no specific and credible intelligence indicating a plot on the homeland. And that is based on the latest information I just received in the Situation Room.”

There is, however, a worldwide travel alert in effect. The US State Department warns American travelers to remain vigilant following increased terrorist threats around the world:

“The State Department alerts U.S. citizens to possible risks of travel due to increased terrorist threats. Current information suggests that ISIL (aka Da’esh), al-Qa’ida, Boko Haram, and other terrorist groups continue to plan terrorist attacks in multiple regions.  These attacks may employ a wide variety of tactics, using conventional and non-conventional weapons and targeting both official and private interests. This Travel Alert expires on February 24, 2016.”

But the travel warning has elicited something other than vigilance from travel and security experts.

“It’s an evasion of responsibility because it’s so vague and unspecific,. It's like someone trying to cover their tracks so as not to be liable,” says Clive Irving who writes about travel for The Daily Beast.  Still, Irving admits it’s very important not to underestimate the risk. “I think the risk is pretty obvious to everybody. It's just a matter of common sense if you're traveling abroad, the things you shouldn't do.”

American travelers are well-schooled in that kind of heads-up, common sense approach, but Irving says he’s bothered about what he sees as “a kind of return to a post 9/11 paranoia, which leads to excessive caution, and which leads people to cancel trips they don't really need to cancel, and which at the same time plays right into the playbook of what terrorists want you to do. So it’s very important to work out what they want you to do and then make sure that you don't do it. One of the things they want you to do is to cancel trips and make a general wreck of the travel business.”

There are already some early indications that travel warnings and travel anxiety following the attacks in Paris (and more recently in Mali) are having a negative impact on flight bookings to the French capital and other destinations. Airline and travel stocks, including Air France and EasyJet, fell sharply this week and some market analysts predict a lengthy slump.

The so-called ‘new normal’ after 9/11, says Irving, was that “Americans tended to want to travel within what they see as a hermetically sealed bubble that guarantees American security. So it's good news for people who run cruise lines, because a cruise ship is a piece of floating America, you're with other Americans, and you feel secure.”

But that kind of  travel, that defensive reaction to terror events or official travel warnings is worrisome, says Irving. ”I think it’s sad because nothing broadens the mind more than travel and these days closing the mind can become xenophobic or isolationist. In order to deal with this problem, we need to be world-minded not narrow-minded.”

Dan Richards is hearing from a lot of travelers who have the jitters right now. He’s CEO of Global Rescue Boston, a company that manages travel risk and can get intrepid travelers out of very sticky situations. Richards says you probably shouldn’t cancel your travel plans in the wake of recent warnings, but you should be “situationally aware of your surroundings.” His basic recommendations for travelers who elect to go where there is an increased level of threat — remote locations for example — include carrying along a satellite phone, a small first aid kit, and registering with the US State Department.

Sounds like a hassle right. So is it possible to be, vigilant, situationally aware and still have a good time traveling?

“I think that travel in the modern age today with everything that’s going on the world can still be done very safely,” says Richards. “I think people should just remember that the likelihood, statistically, that they be injured or killed in a terrorist attack is extraordinarily low. The traditional things that impact travel are motor vehicle accidents, illness and injuries. Mundane occurrences are much more likely to impact travel in a negative way more than any of these terror events. Still, these events do obviously occur and they’re certainly scary and horrible, so you need to be prepared.”