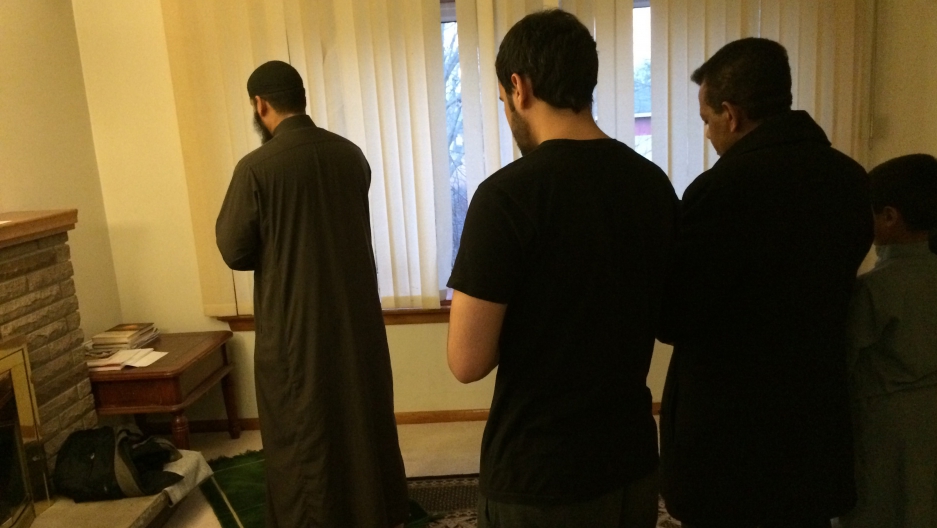 A small congregation of Peterborough's Muslims have been praying in the living room of a nearby house as their mosque undergoes repairs.

The city of Peterborough is about a 90-minute drive northeast of Toronto. It’s a town of some 80,000 with one small mosque. A day after the attacks in Paris, the mosque was set on fire.

“They called me, I came, I saw the smoke,” says Kenzu Abdella, a mathematics professor and president of the Kawartha Muslim Religious Association in Peterborough.

“My first reaction was like, ‘Oh was there anybody left in there?’ Thank God that nightmare scenario didn’t happen. But the smoke looked really bad. And I said, ‘Our mosque is just burning down.’”

The building was saved, but the fire caused $80,000 in damage. It’s being investigated as an arson.

“It’s a hate crime, I don’t’ know what else to call it,” says Peterborough city councilmember Dean Pappas. “What a terrible thing to happen.”

Pappas called the incident a “blemish” on his city, but said it also showed the best of his city.

“The community reaction, there was $100,000 raised in 24 hours to help rebuild all the damage from the mosque, and that was from the broader community at large in the city of Peterborough. Every faith-based (group) offered space for them to pray.”

The mosque congregants prayed at a local church last Friday, and were even joined by some out-of-town dignitaries. For the smaller prayers during the week, they’re using a makeshift mosque. I visited for the sundown prayers where five men and one boy were gathered for prayers.

“This is the living room of some students from the same congregation. They were kind enough to offer us their living room to do our prayers,” says the imam Shazim Khan, originally from Guyana.

Khan said he’s overwhelmed by the support he’s gotten after the fire.

“I think whoever did do this stuff, mostly when people do stuff like this, it is to divide and create enmity and hatred,” says Khan. “It didn’t happen, it backfired. The good actually came out. And we are very grateful for this.”

Still, many Muslims in Ontario aren’t feeling so settled after a wave of hate crimes targeting Muslims. Last week in Toronto, two men attacked and robbed a Muslim woman on her way to pick up her son at a public elementary school. According to police reports, the men called the woman a “terrorist” as they pulled on her hijab and punched and kicked her. In a separate incident, two Muslim women were verbally assaulted on the subway.

“Being an identifiable Muslim women, in times like this, it becomes a bit… it’s scary,” says Shireen Ahmed, a writer and activist for women’s issues, who also wears a hijab.

But beyond fear and anger, Ahmed says she’s frustrated for feeling forced to apologize to those who lump all Muslims in with terrorist groups.

“You’ve got Muslim clerics and scholars from all over the world denouncing any type of Islamic association with ISIS. You have scholars and leaders from our communities saying this has nothing to do with our faith, what they’re doing, those acts of terror are not permissible. It’s almost like no answer will be good enough to give these people. They’ve decided their hateful agenda.”

In Peterborough, Kenzu Abdella says Muslims, like him, are just as afraid of ISIS as anybody.

“If you look at the number of people that have been killed by ISIS, the majority of them are Muslims.”

At the end of our discussion, I asked Abdella if he wanted to share anything else with me.

“I’m very thankful to Russell, who did the crowdfunding (online).”

I asked how I could track down Russell. But Abdella didn’t know.

I asked Dean Pappas if he knows Russell. Besides being on the city council, Pappas owns a billiards hall — he knows a lot of people in town. But not Russell.

“It was just instantaneously, the money just kind of appeared. And people said, ‘Oh we’re going to raise money for them.’ This guy did it and he gave the money to the mosque without them even asking for it,” says Pappas. “It was just done out of the goodness of his heart.”