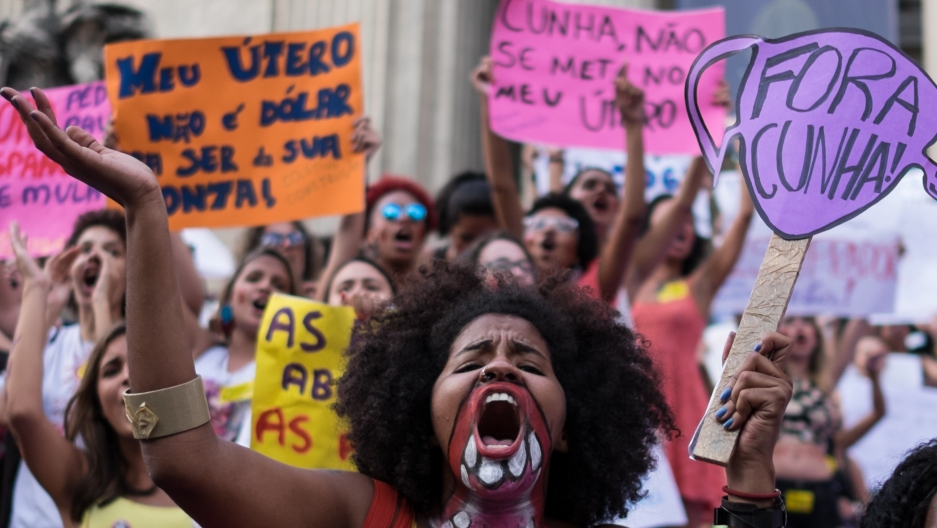 Women protested on Nov. 11 outside in the legislature in Rio de Janeiro in favor of reproductive rights and against tougher abortion rules proposed by Brazil's conservative lawmakers.
Credit: Christophe Simon
Share

Some of the bill’s backers, however, believe it could bring rape victims justice.

It's causing a major debate in a country where abortion remains illegal in all but three instances: where termination is necessary to save the mother’s life, when a woman has been the victim of rape, and when a fetus has anencephaly, a condition in which it is developing without part of the brain or skull.

The new legislation would erase a framework allowing rape victims access to abortions merely with their doctor’s consent. Instead, women would be required to report the rape to authorities and undergo tests by a forensic medical examiner.

Essentially, the new law would replace a system that assumes women are being honest about their pregnancies with one that assumes they are lying and requires them to prove they have been raped, said Sonia Onufer Correa, a women’s and reproductive rights advocate in Rio de Janeiro.

“From a reproductive rights perspective, this is at the center: Are women to be trusted or not?” Correa said.

The bill is the brainchild of Eduardo Cunha, the speaker of Congress’ lower house. An evangelical Christian and former conservative radio host, Cunha made his intentions as lawmaker clear from the very start of his term, when he called on the legislature to create a “Straight Pride Day” to counter LBGTQ events. Cunha’s justification for the bill is an extraordinary read. He claims abortion legalization has been thrust upon Brazil by a cartel of international organizations “inspired by a neo-Malthusian ideology population control, and funded by US foundations linked to super-capitalist interests.”

More from GlobalPost: Brazil’s top legislator alleges Washington and NGOs use abortion to get rid of poor people

But Cunha, who declined an interview, is also in serious political trouble for other reasons. Officials are investigating him for allegedly hiding millions of dollars in illegal payments during a massive corruption scheme at Brazilian oil company Petrobras. There are widespread calls for his impeachment.

And the anti-abortion legislation, part of a slew of conservative bills, has women’s rights groups here deeply worried.

In an interview, Correa, who co-coordinates the Brazilian website Sexuality Rights Watch, explained the convoluted history of Brazil’s abortion laws.

The penal code, passed in 1940, offers little help to the government for actually applying the rules when it comes to abortion in the case of rape. The battleground for pro- and anti-abortion activists and lawyers has thus centered on the scope and application of the rape exemption.

That’s a fight pro-abortion groups have been winning since 1998, when a national protocol was introduced allowing women access to an abortion or emergency contraception with a letter from their doctor.

The protocol, which isn’t actual law but is merely a set of guidelines for public health workers, is what the new legislation seeks to overrule.

More from GlobalPost: Brazil's shocking violence against women, in 5 charts

Cunha’s bill would make two big changes to the way women seek abortions: Firstly, women would be required to file a police report about their rape before being allowed access to an abortion procedure. Secondly, victims of rape would be required to undergo an examination by a state medical examiner.

The bill also makes providing medical assistance to women who haven’t met these conditions a crime punishable by several years in prison, a proposal that has riled the medical establishment here.

Luciana Lopes Lemos, a gynecologist and anti-abortion advocate in Rio de Janeiro, said the main purpose of the law isn’t to criminalize women or make their lives more difficult. She said the thrust of the law isn’t religious or moral, but about public safety.

By requiring women to denounce rapists before they can access abortion services, far more rapes will be reported to the police and ultimately, more rapists will be brought to justice, she said.

“I think this is a way of protecting women,” Lemos said. “Because if women don’t report the crime, they remain scared and embarrassed, and the rapist gets away without being investigated.”

Lemos said the requirement to visit a medical examiner isn’t as onerous as it sounds. Women aren’t required to prove they have been raped, she said, they just need to have an examination.

But Correa said that’s not yet certain. The bill’s wording is vague on this point, saying that the medical examiner’s decision must be “based on evidence.” Exactly what evidence won’t be established until after the law’s approved and fleshed out with a new technical protocol.

Either way, the new law would revert things back to how they were before the 1998 protocol, Correa said. By essentially placing approval for abortions in the hands of a medical examiner, there’s little doubt fewer women will be allowed to undergo abortions on the basis of rape.

“The question isn’t so much the procedures involved, it’s the principle,” Correa said. “The criminal justice system, in principle, doubts — its fundamental principle is that both criminals and victims are lying all the time.”

According to analyses in Brazilian media, the bill, which has already cleared three parliamentary committees, is likely to pass a vote in the lower house. Although Brazilians have elected two consecutive leftists, including a first woman, as president, the nation’s Congress has become increasingly conservative in recent years, and is still 90 percent male.

Only 16 percent of Brazilians support legalizing abortion, according to a poll last year from the Brazilian National Institute of Statistics. Brazil’s O Globo media group reported that 200,000 women are hospitalized each year in the country as a result of botched illegal abortions. Globo said 850,000 women have illegal abortions every year.

Recent weeks have seen growing public demonstrations against the law, however, with protests against the legislation and its author in several cities. On Wednesday, a group of women’s rights advocates will also present a petition with more than 90,000 signatures to Brazilian lawmakers.

Correction: This article previously overstated the amount of money that legislator Eduardo Cunha is accused of receiving in kickbacks.  The amount has risen over recent months. As of Dec. 3, authorities are investigating Cunha for allegedly hiding almost $16 million.