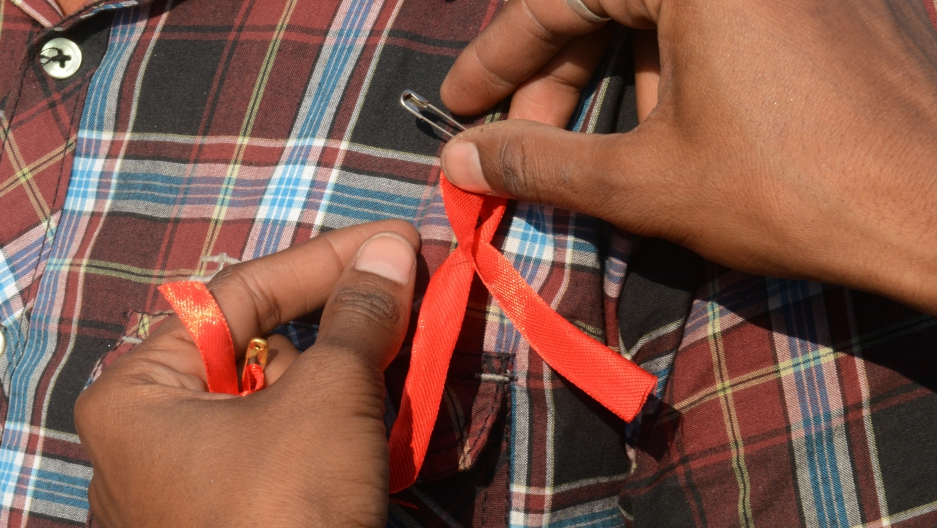 BOKSBURG, South Africa — When Zandile Simelane was 17, a high school student aspiring to a big future, she fell for an older man.

“He sold me dreams,” Simelane recalls. "What people don’t realize is that not all dreams are good.”

They had unprotected sex, and he infected her with HIV. Now 23, Simelane tells her story to other young South African women, warning them away from “sugar daddies" who appear to offer a shortcut to the good life.

This is the new front line in fighting the HIV epidemic: stopping the older men who infect South Africa’s young women and girls with the virus that causes AIDS.

The sugar daddy phenomenon is a transactional relationship in which a young woman has sex with an older, wealthier man in exchange for gifts or money — for example, he might pay for school fees, cell phone airtime or even the rent.

Often the young women are in a difficult financial situation that leaves them vulnerable. Other times they are aspirational, seeking luxuries beyond what they can afford.

Unemployment among youth is particularly high, with 50 percent of South Africans aged 15 to 24 unemployed — compared to an overall rate of 25 percent.

“The higher incidence of poverty amongst women also gives rise to higher levels of transactional sex and the so-called sugar daddy syndrome,” Bathabile Dlamini, minister of social development, said in a speech in August to the South African National Aids Council Trust.

"All of these are key risk factors for contracting HIV and AIDS for especially younger women."

While great strides have been made in fighting HIV and AIDS, young women and girls account for an overwhelming 71 percent of new infections among adolescents in sub-Saharan Africa. Every week in South Africa, some 2,400 women between the ages of 15 to 24 are infected with HIV. Teenage girls are up to eight times more likely to be infected than boys.

While sugar daddies are not a new phenomenon in South Africa, the high rate of HIV infection among young women has added a worrying new dimension to the problem. Zandile Simelane, a speaker at an event aimed at helping to lower the rate of HIV infection in young women.

To combat the problem, a US-backed program called DREAMS is targeting adolescent girls and young women living in areas with high prevalence rates of HIV, in 10 countries in southern and East Africa. The program aims to lower HIV incidence by addressing the complex structural and societal factors behind the problem.

At the launch of South Africa's DREAMS program Tuesday in Boksburg, near Johannesburg, Simelane shared her experiences with a few dozen young women lounging in beanbag chairs — part of the program's efforts to get the community involved.

Patrick Gaspard, the US ambassador to South Africa, says that a key part of the DREAMS program is creating economic opportunities for young women, through job training, microfinance and funding for entrepreneurs.

Similarly, at a South African AIDS conference earlier this year in Durban, researchers showed how giving financial support to young girls, along with guidance from teachers and parents, helped them to stay in school and away from sugar daddies — and reduced their chances of being infected with HIV.

The $67-million South African DREAMS program is backed by US government initiative called Pepfar, or the President’s Emergency Plan for AIDS Relief, along with the Bill and Melinda Gates Foundation and Girl Effect.

“Young women in particular are vulnerable because you’re not getting the opportunities that you should in society,” Gaspard said in an address at the launch. “It’s inconceivable that this week alone, 2,400 young women in the country will become HIV positive”

Deborah Birx, ambassador-at-large and the US global AIDS coordinator, says that progress made in the HIV and AIDS response over the last 20 years is at risk.

She points to the demographic issue: in sub-Saharan Africa, 60 percent of the population is under the age of 30.

In South Africa, for example, the number of girls between the ages of 10 and 30 has jumped from 7 million to 10 million, “yet we’ve not really impacted their frequency of infection," Birx says. "So that’s leading to a huge increase in the number of infections of young girls.”

While Africa’s youthful population is often cited as one of its best resources, this “demographic dividend” could become a “demographic failure” unless young people remain HIV-negative.

“We could lose the gains we have made,” Birx says.

Simelane says that after testing positive for HIV, “I stayed in my room and cried for a week.”

Now she speaks of living through the experience, growing in strength and focusing on her goals in life, which include studying film and television production. She believes that many other young women in South Africa have had similar experiences to her own, but don’t speak out about it.

“Young women don’t realize the strength they have.”