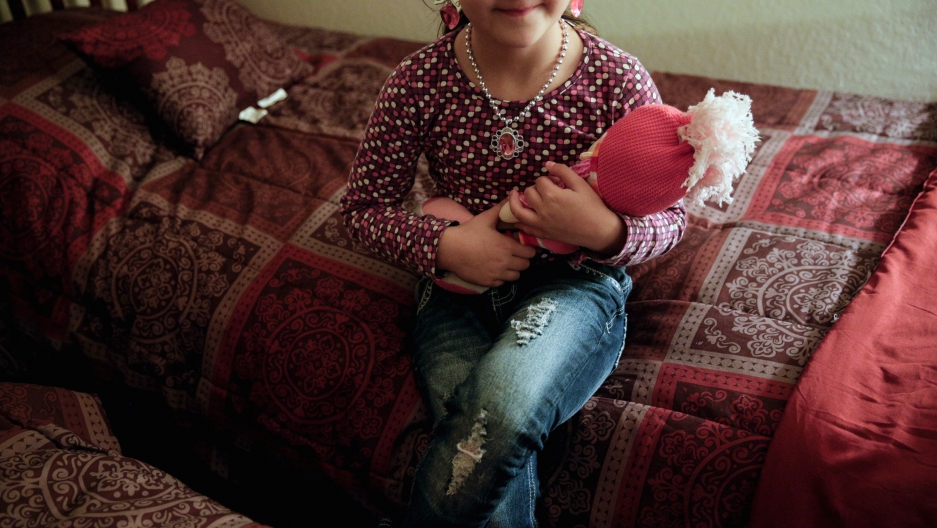 Five-year-old Leen, a Syrian refugee, poses for a portrait with her doll in her Sacramento, California bedroom on November 16, 2015. Her face is not being shown for security reasons.

You can’t see her face in the picture above, but it’s hard to imagine that this little girl in ripped jeans, holding her doll in her arms, has a face that would be at all scary.

Her name is Leen and she is 5. She fled Syria with her family 3.5 years ago. They lived in Jordan up until September and then they arrived in Sacramento, California.

“We witnessed things that are difficult to describe,” Leen’s father, Mohammad Abd Rabboh, told Reuters. “You walk in the street and someone falls dead right in front of you.”

The attacks in Paris have sparked lots of fear. And no doubt, those fears are one factor in the whole debate about how to respond to the Syrian refugee crisis.

But Leith Anderson says that what’s at stake in all this is human life. “The lives of refugees who have fled violence and threat,” he says.

Anderson is the president of the National Association of Evangelicals, which helps resettle refugees in the US through its humanitarian arm, World Relief. Anderson says none of the political rhetoric that’s erupted around this issue has motivated him particularly.

“I’m driven more by — as an evangelical Christian — that the Bible calls us to care for those that are in need,” he says. “I think of Jesus’s parable of the good Samaritan,” who goes out of his way to help someone in need.

In contrast, the US House passed a measure on Thursday that would make it harder for refugees from Syria and Iraq to enter the US. The bill was pushed by the Republican leadersship.

But Republican presidential hopeful Donald Trump has gone even further. Trump said he would be willing to consider closing mosques and requiring Muslim Americans to carry special identification.

“Evangelicals have long been involved in resettling refugees. But the other side of it is, evangelical Christians are refugees around the world. So, in many parts of Africa and other places, we are the ones that are in this situation and ... we want people to respond to us with compassion,” Anderson says.

“We don’t want to be sorted out and persecuted. So we shouldn’t be doing it for other people,” he adds.

Not all Christian leaders here in the US see things the same way. Reverend Franklin Graham, for example says, “Islam has declared war on the world, and it’s high time acknowledge it and respond decisively.”

We cannot allow Muslim immigrants to come across our borders unchecked while we are fighting this war on terror. #ParisAttacks

“If we continue to allow Muslim immigration, we’ll see much more of what happens in France,” Graham wrote in a Facebook post. “It’s on our doorstep.”

Anderson says there are a variety of opinions among evangelical Christians and that he understands how the recent terrorist attacks in Paris and Beirut, “has us all sobered and frightened.”

“But we need to take a longer view,” he says. “A Biblical view says, ‘What about these people?’”

“If somebody is bleeding and comes to an emergency room or they’re hungry and they come to a food shelf, we’re not going to really ask their religion. We’re going to help them stop bleeding and we’re going to feed them. And that’s what we need to do,” Anderson says.