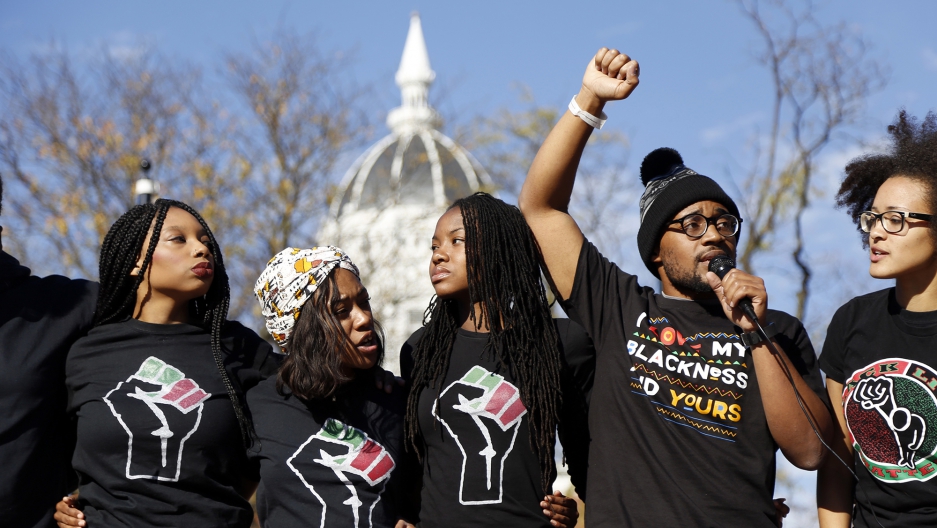 Accross the country black students are demanding better treatment at their colleges and universities.

On Monday the president of the University of Missouri stepped down after months of students protests calling for his resignation because he did not take racist incidents on campus seriously enough.

Though an immense victory for student activists, this was only one of the demands of the group that are calling themselves Concerned Student 1950 had. (The group is named for the first year a black student was accepted to Missouri.)

Black student activists have also been organziing at Yale in recent weeks. A debate erupted over a university email calling for an end to culturally appropriating Halloween costumes. Shortly thereafter, students reported a campus frat held a party that was "white girls only."

Students have consequently published a list of "black student demands for the administration." Other campuses are similarly organizing.

Here are the demands of student activists accross the country:

"The black experience on Mizzou’s campus is cornered in offices and rarely attended to until it reaches media. Then, and only then, do campus administrators seek reactionary initiatives to attest to the realities of oppressed students, faculty, and staff. These temporary adjustments to the university’s behaviors are not enough to assure that future generations of marginalized students will have a safe and inclusive learning experience during their time at Mizzou."

Students are demanding that the school president step down if officials don't take such steps as creating a black studies major and hiring more minority faculty. On Monday, they occupied the administration building to press their demands.

"The following is a list of possible action steps that black students want and need in order to move forward. This by no means is representative of the entire black community at Yale, but came from a discussion between over 60 Black students as some potential ideas. While most these are requests of the administration, black women would specifically like to request the support of black men in implementing and encouraging the campus to respond to these requests and others, and in directly outreaching to us to see what support we need."

"We, students of Amherst College, refuse to accept the negative social climate created towards our peers of color and other marginalized groups. We have begun this movement, Amherst Uprising, in an effort to change the status quo for a more just and inclusive environment within our campus. We demand that Amherst become a leader in the fight to promote a better social climate towards individuals who have been systematically oppressed."

"At 1:30 p.m. we will be walking out for all the injustices students of color face on this campus and other colleges nationally. With the University of Missouri's president stepping down, we demand Rochon to do the same as it is vital to fight against both covert and overt racism in all places of education and empowerment."

“Students of color must be able to feel as safe and comfortable as white students when talking to elders and leaders on campus,” said Junior Najha Zigbi-Johnson to Greensboro News and Record.

“You can go a whole four years talking to white people, being taught by white people and not having anything to do with black people,” said sophomore Reyna Smith to the The Culpeper Star-Exponent.