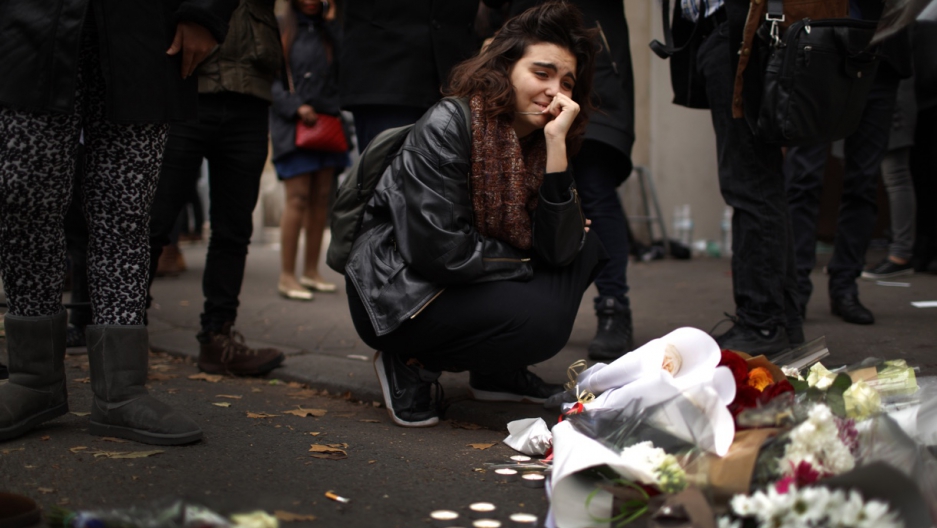 A woman reacts after placing flowers near the scene of a terrorist attack in Paris, France on Nov. 14, 2014.
Share

PARIS, France — “What happened is madness.” Ali is beside himself with grief. The barman at Le Carillon, one of the scenes of Friday night’s shock terrorist attacks on Paris, has been up all night.

“I stayed with the bodies, trying to staunch their wounds,” he said. “We’ve lost regular clients, our friends.”

Parisians woke up on Saturday morning to a nationwide state of emergency after last night’s series of gun and bomb attacks. They left at least 128 dead. The Islamic State claimed responsibility. Other targets included other bars and restaurants, a popular music venue called Bataclan and the stadium, Stade de France, where President François Hollande had been watching France play Germany in a soccer match.

Around 9 a.m., a small group of mourners had gathered in front of Le Carillon to light candles and lay down flowers. Onlookers struggled to make sense of the madness. “Why did they attack here? This is a poor area, with lots of immigrants,” said Ouria Zegda, 60, a retired mom of two who lives just across the road from the bar.

“I fled Algeria 20 years ago to get away from all this and now I feel like it’s caught up with me,” she said. “It was all so organized. Where did all the arms come from? How come these people weren’t under surveillance? They could be from this area. We’ll be living like rats now, scared to leave our homes.”

Last night, there were scenes of shock, rage and confusion in the French capital as locals roamed the streets, struggling to find safe routes home. By midnight, a crowd of onlookers had gathered behind police cordons near Bataclan, in the city’s 11th arrondissement, against a backdrop of explosions, gunfire and screeching sirens, watching efforts to liberate hundreds of music fans taken hostage by gunmen.

US rock band Eagles of Death Metal had been playing at the 1,500-seat venue, when it was stormed by gunmen with Kalashnikovs. At least 80 fans lost their lives in the attack, by far the deadliest that night.

“This is Charlie Hebdo to the power of 10,” said Sylvain Lecourtois, 30, an environmental activist, referring to January’s attacks on the headquarters of the French satirical newspaper, in which 12 were shot dead. He was at home when he heard news of the attacks, and rushed to the scene in defiance of official warnings to Parisians to stay at home.

More from GlobalPost: What will supporters think of Charlie Hebdo once they actually read it?

“We need the coalition to go to ramp up action in Syria,” he said, visibly fired-up. “France is a great nation. It’s a country of freedom. We need to defend ourselves.”

“This is war,” said Hakim Saidj, 32. The youth worker had been celebrating his birthday at a restaurant on Rue Oberkampf, just around the corner from Bataclan. “I’m for peace. But, we need to eradicate the terrorist threat. Terrorism is like a snake," he said. "You have to cut off the head to kill it.”

Romain Carsuzan, 26, a mechanic, had also been dining out in the city center. “Even after Charlie Hebdo, we didn’t realize the extent of the tension in the city. A lot of it was hidden,” he said. “I thought our police and security services would have protected us much better.”

Criticism of France’s security services was rife among panic-stricken locals on the city streets last night. “I respect the police, but where have they been all this time?” asked Sonia Bontouil, 23, a waitress.

She sits outside the Indiana Cafe bar with two friends, the three of them smoking furiously as they watch riot police assemble on Place de la République. “It could have been me,” she said, on the verge of tears. “How were these people able to get ahold of arms?"

“I am a Muslim and I am ashamed of these people who cry ‘God is Great’ as they kill innocent people. They are creating a third world war. When the day of final judgment comes, they will not go to paradise.”

Bontouil's friend, Mehdi Ben Lakhdar, 21, was near Le Carillon as all hell broke loose. “There are no words to describe what happened,” he said. “All I remember is gunfire and blood. Everyone was running. I saw bodies on the ground. Tables were overturned.”

“Don’t be like France, don’t open your borders,” said Paul Mary, 23. “We have to make war on these vermin.”

Back at Bataclan, John, an American who has been living in Paris for seven years, shakes his head. “Paris is not supposed to be like this,” said the New Orleanian. “In America, we’re used to guns. Over here, even after Charlie Hebdo, it’s really surreal.

François Hollande called the attacks “an act of war that was prepared, organized and planned from abroad, with complicity from the inside.” He has vowed to wage a “merciless” fight against terrorism. Three days of national mourning have been declared.