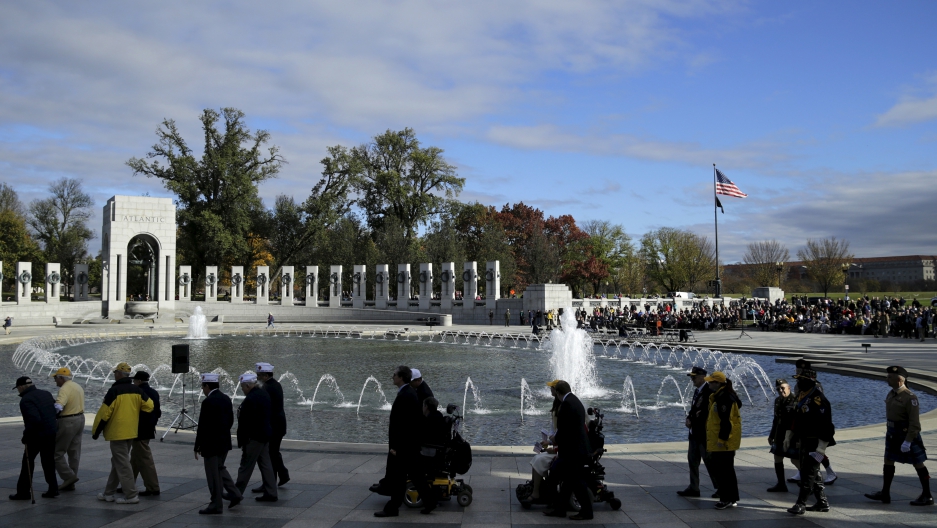 World War II veterans walk to a wreath laying ceremony at the National World War II Memorial on Veteran's Day to pay tribute to the more than 16 million men and women who served with U.S. armed forces during World War II.

Of the 16 million Americans who served in World War II, just over 800,000 are still alive today, watching as time has rewritten the war's history to better reflect the tactics and the players who determined its course.

In his new book "The Rise of Germany, 1939-1941: The War in the West," author and historian James Holland debunks myth after myth from World War II. He says that Hitler's demise was actually in the cards from the beginning.

“The decision by Hitler to go into Poland on the first of September 1939 was possibly the most catastrophic of all of the decisions he made,” says Holland. “He was calling Britain and France’s bluff, and they’d had enough — they were not going to stand by anymore. As a result of that, he went into a war which, certainly on paper, he should have never won because Germany was so resource poor.”

Holland says that amid the mass devastation and tragedy of World War II, Hitler's errors only ensured a long-term victory for the United States.

“People just assume that America entered the war kind of fully formed — it wasn’t like that at all,” he says. “It was a really long struggle to get to that position.”

On the eve of the World War II, the US Army only had about 74 fighter planes and about 190,000 troops — a far cry from a military behemoth.

“It was incredibly backward, really behind, and very insular,” Holland says. “There was an extraordinary logic to that, which is if you have a very small armed services, then the chances are you’re not going to go to war. No one in America wanted to go to war — that whole isolationist thing was a very conscious decision made in the fallout of the First World War a generation earlier.”

When looking back, Holland says that the US would not have become a global superpower had it not entered World War II.

“Playing the whole ‘What if?’ card is always a sort of fascinating parlour game,” he says. “What would have happened? I don’t know. But I can see a situation where Nazi Germany would have dominated Europe, but I think they would have found it very, very hard to obliterate Britain because of Britain’s global reach. I think Britain would’ve held on, but America — it wouldn’t have become the nation, necessarily, that it has become.”

Holland’s new book, the first in a three-part series, paints a different picture of the Soviet Union's role in the allied victory.

“The war in the east is of enormous importance because that’s where Germany really bleeds itself dry on the ground,” Holland says. “But the thing about the war in the east is that Hitler wouldn’t have turned east had he not lost the battle of Britain in 1940. The worst-case scenario for Germany is fighting a war on two fronts. The way Germans fight the war is always to make them as quick as possible — it’s a sort of massive amount of force at the schwerpunkt, the point of impact.”

This reexamining of history has so offended Vladimir Putin that the Russian president has banned Holland’s book from the country.

“The point about Putin banning it is he’s an ultranationalist and ultranationalists always want to control their history,” Holland says. “Every nation has its own myths about its past, and that’s part of its sort of collective heritage and cultural myths. We saw this in the UK last year with the whole referendum about whether Scotland would split. Putin’s doing exactly the same thing — it fits his own purpose of Russian nationalism to bring up the great patriotic war and sideline any kind of Western analysis.”

This story first aired as an interview on PRI's The Takeaway, a public radio program that invites you to be a part of the American conversation.