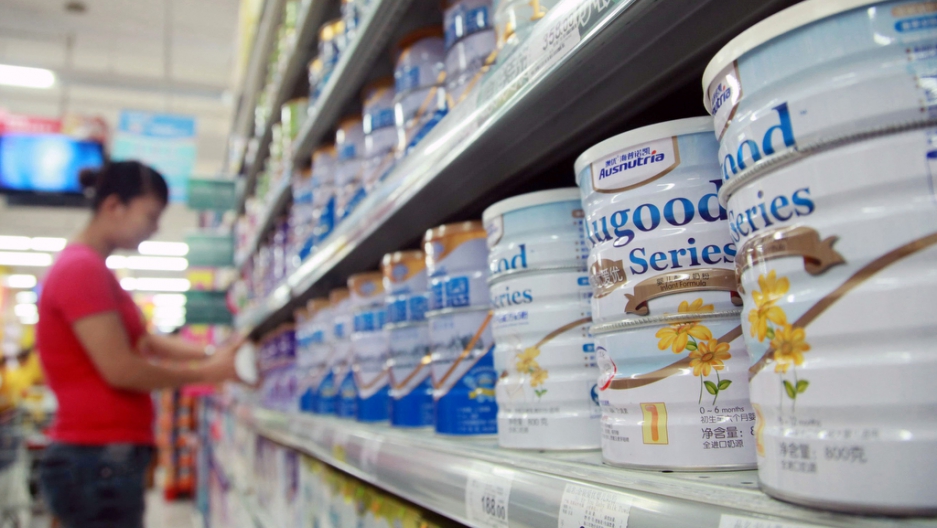 A woman looks at baby formula brands in a supermarket in the southern Chinese province of Hainan on Aug. 7, 2013.
Share

Australian moms and dads have a problem right now. There's not enough baby formula in the country to feed their hungry offspring.

The shortage is so bad that supermarkets and pharmacies are rationing cans of baby milk powder after a surge in demand left shelves empty and new parents in a panic.

The reason for the nationwide deficit is not a sudden baby boom Down Under. Rather, it's because people are buying the infant food in bulk and selling it to buyers in China — where there is insatiable demand for Australian and New Zealand-made baby formula, perceived as safer than the Chinese-made stuff.

Australian and New Zealand companies export their products to China — and make a lot of money doing so — but because of safety fears many Chinese parents prefer to buy their formula online through grey-market sellers or from someone returning to China from Australia.  Direct purchases, in their minds, carry less risk of adulteration or counterfeiting than the products sold by Chinese retailers.

For the sellers, there's a hefty profit margin. Cans of baby formula are being sold on e-commerce sites such as eBay and Taobao for several times the Australian retail price.

Australian parents have taken to social media networks to vent frustration over the shortage and outrage at those who blatantly violate purchasing restrictions.

Melbourne mother Jessica Hay recently triggered a firestorm on Facebook after she posted this photo of people buying an entire pallet of a2 Platinum baby formula at a Woolworths supermarket, which is supposed to be restricting shoppers to eight cans of baby formula. 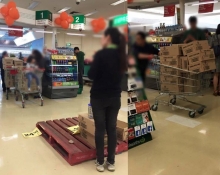 Woolworths promised to investigate the incident after irate parents responded with messages like this:

"Disgusting!!!! I can't believe you allowed this to happen. We all have children to feed and you allowed 1 person to leave your store with that much formula?? What happened to limiting sale items to 1-2 boxes per customer?? Always putting your bottom line first. Absolute disgrace!!!" wrote Melissa McKay.

Bellamy's, a popular maker of organic formula, is also facing a public relations crisis. The Tasmania-based company told desperate parents it was increasing production “as rapidly as we can.” It blamed the shortage on China's massive e-commerce event called Singles' Day on Nov. 11, when retailers offer huge discounts, and said the crisis should ease later this month.

We understand at this time, it is... - Bellamy's Organic | Facebook

But that’s not soon enough for parents who have been struggling with the shortage for months. Some have visited as many as 15 stores looking for their preferred brand of baby formula. There have been reports of “ugly scenes” at supermarket check-outs as parents struggle to get their hands on the precious product.

More from GlobalPost: You might call Singles' Day in China the world's largest retail therapy bonanza

Some parents are calling on companies to stop exporting their baby formula until the Australian shortage has been resolved. And they want the Australian government to crack down on the grey market.

"There are 4,159 tins of stage 3 in your Chinese site, why can't you meet the demand of us Aussie mamas before exporting overseas? What a joke! My baby is on his last tin of Bellamy and stage 3 are no where to be found and yet the China site has 4,159 tins!" wrote user Sharon Aidan Mac on Bellamy's Facebook page.

Amy Jane wrote: "Yep Woolworths amongst others are allowing Australian babies to starve so they can help feed Chinese babies at a huge profit to the purchaser too."

But it's not just Australian babies who are being affected. Chinese demand for baby formula has led to milk powder shortages and purchasing restrictions in numerous countries around the world.

The purchase of foreign-made baby formula by Chinese parents has surged since 2008, when six babies died and an estimated 300,000 were sickened after drinking melamine-tainted formula. Melamine is found in plastics and was added to the powder to cheat protein tests.

Baby formula makers such as Bellamy's and a2 Milk have seen their profits and sales skyrocket as a result.

Bellamy's posted a 617 percent increase in net profit on a 153 percent jump in sales for the 12 months up to June 30. An estimated 27 million Australian dollars' (about $19 million) worth of Bellamy's formula was bought in Australia in the first six months of 2015 and resold to China, the Sydney Morning Herald reported. New Zealand-based a2 Milk, meanwhile, saw sales of its a2 Platinum infant formula soar 445 percent in Australia, New Zealand and China in the 2015 fiscal year. Its sales of infant formula are expected to triple in the current year.

"We have to be practical about this in the sense that Australia has 300,000 babies born every year. We haven't suddenly seen a spike in the birth rate and we haven't seen a spike in formula feeding rates, so a lot of growth in Australia is coming from this demand out of China,” Bellamy's Chief Executive Laura McBain told the Sydney Morning Herald in September.

"There are 20 million babies in China, 300,000 babies in Australia. You don't need to be a rocket scientist to fill in the maths on that."