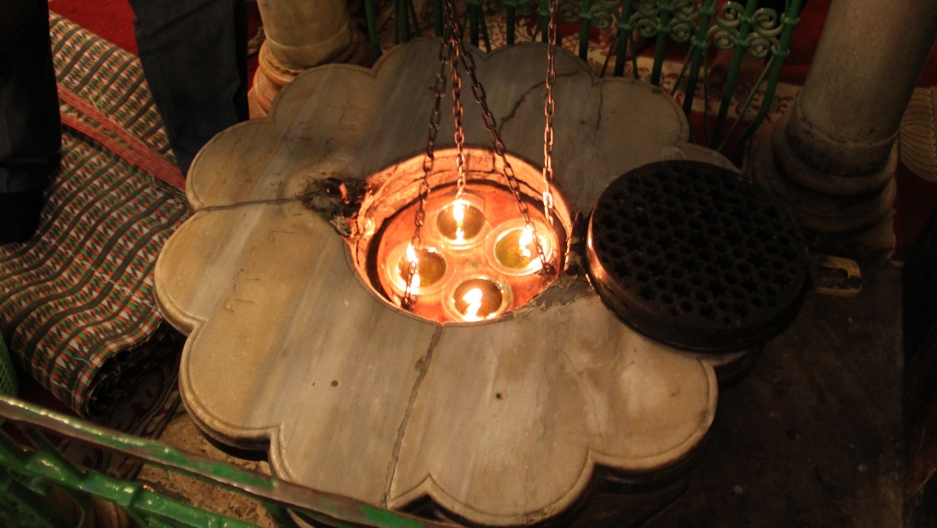 A mosque attendant lowers a candelabra into a narrow shaft on the Muslim side of the shrine to an underground cave. It's revered as the place where Muslims and Jews believe Ibrahim, or Abraham, is buried.

Hebron is the tensest city in the West Bank. It’s where about 850 Jewish settlers live in guarded enclaves amid 270,000 Palestinian residents. And in recent weeks, there have been shootings and attacks right next to an ancient shrine there that Israelis and Palestinians share, begrudgingly.

Jews call it the Cave of the Patriarchs, while Muslims call it the Ibrahimi Mosque, but both agree on who is buried there: Abraham of the Bible, or Ibrahim as he’s called in the Koran. So too are Sarah, Isaac, Rebecca, Jacob and Leah, all spiritual patriarchs and matriarchs whom both Jews and Muslims revere.

The history of the shrine mirrors the history of the Holy Land itself. King Herod built it as a Jewish structure about 2,000 years ago. Then Byzantine Christians took it over and built a basilica. Then Muslim conquerors converted it into a mosque. Then Crusaders took control of it. Then Muslims took it back.

Today, the shrine is divided — one side is for Muslims; the other is for Jews. Everyone must pass through an Israeli military security checkpoint. 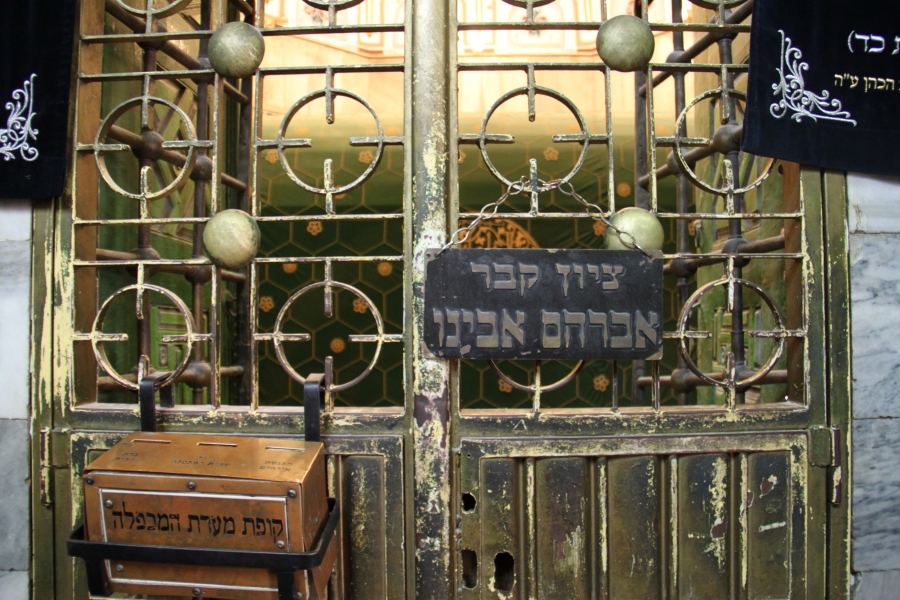 The locked doors of the structure housing the cenotaph, or grave marker, of Abraham of the Bible, known as Ibrahim in the Koran.

Inside a large carpeted hall on the Muslim side of the shrine stand two structures housing enormous cenotaphs, or grave markers, for Isaac and Rebecca.

Muslim authorities prevented non-Muslims from entering the shrine for 700 years. That changed after Israel captured the West Bank in 1967. Jews started holding prayers at the site, sometimes at the same time as Muslim prayers.

“I was at home when I heard about it. I rushed to the scene and I carried many injured who were soaked in blood,” says Monzer Abufilat, the Muslim authority who oversees the site today, standing where the attack took place. “The carpets of this mosque were soaking in a pool of blood.”

One of those days happened last weekend, for a Sabbath linked to the Torah story of the burial of Sarah at the site. Before relinquishing their side, Abufilat and his attendants rolled up the wall-to-wall prayer mats.

“We remove our carpets because we don’t want them to get dirty. The Jews come here, they conduct their dances, their celebrations, and also their drinking,” Abufilat says. It’s a reference to Jews drinking wine during holiday rituals.

A number of years ago, a group of Jews snuck inside. And every morning, the Muslims who run the mosque manage to get close.

Abufilat unlocks the cover to a small manhole, about the size of a dinner plate, and a man lights a silver candelabra that just barely fits inside and lowers it down a shaft on a long chain, down to the underground cave. It’s a symbolic gesture of connection.

On the Jewish side of the shrine, Rabbi Mordechai Hellinger, who grew up in Miami, FL, but now lives in the Hebron area, guides visitors.

The shrine is an important spot for the Jewish settlers of Hebron. According to the Bible, the shrine stands on the spot where Abraham bought a plot of land as a burial place for his family about 3,000 years ago.

“This is the first documented acquisition of property by a Jew in the Holy Land,” Hellinger says. “It’s the start of it all.” 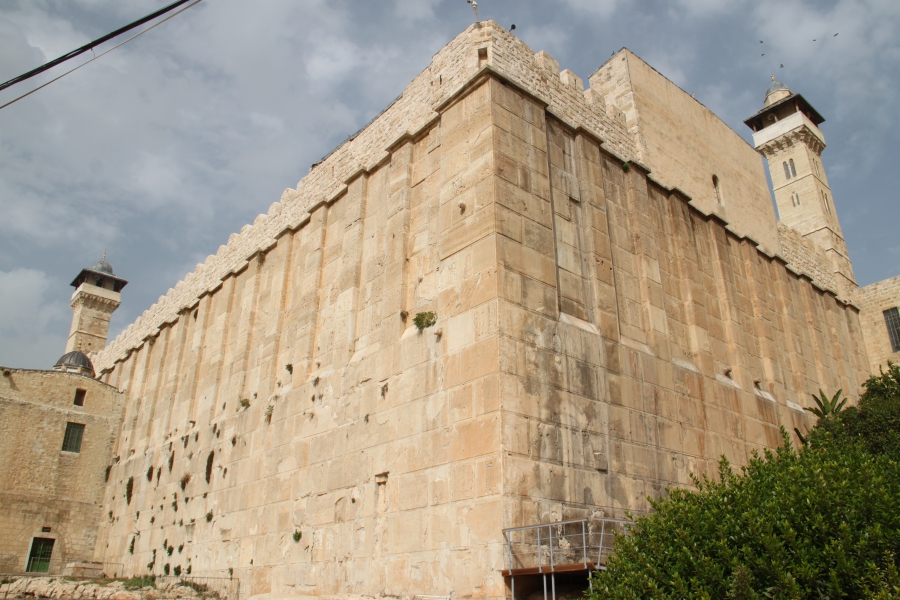 The holy site at the heart of strife in the ancient West Bank city of Hebron. Jews call it the Cave of the Patriarchs, while Muslims call it the Ibrahimi Mosque.

The muezzin recites the Muslim call to prayer, but the microphone is on the Jewish side of the site, so soldiers escort him to the microphone. When he’s done, they quickly usher him back through the bulletproof divider to the Muslim side.

“He goes through five times a day. 'See? He’s walking through now,'” Hellinger says, as the muezzin rushes past with military escorts.

Hellinger recites morning prayers in front of a large wooden Torah ark, which is attached to wheels so Jews can cart it out for the 10 days Muslims take over their part of shrine.

Neither side trusts the other to respect its property, and neither is very happy with how this place is shared.

“Muslims do follow the Jewish prophets as well, and they pray to the same God. So if they want to pray, I’m all for it,” Hellinger says. But he believes the whole shrine should be under Jewish authority that would set the rules for when Muslims could come to the site.

“Anywhere the Muslims take charge, Jews automatically become third or fourth class citizens, as we see with the Temple Mount,” he says, referring to the holy site in Jerusalem revered by both Jews and Muslims but that today is only a Muslim shrine.

“The Temple Mount is holiest site in Judaism — the holiest. Jews are only allowed up there two very small times a day, and we are not allowed to pray there. We are arrested for praying there,” he says.

Israel fears that Jewish prayer at the Jerusalem site could spark a holy war. Palestinians fear Israel wants to split the site between Jews and Muslims, like at the Hebron shrine.

Abufilat, the Muslim director of the shrine, says Jews have no right praying there.

“Prophet Ibrahim was never anything but a Muslim,” he says. “He was not Christian. He was not Jewish. This place is only for the use of Muslims.”

Two peoples, clinging to the same place, each claiming it as its own: the Israeli Palestinian conflict in a nutshell.

Abufilat says if the prophets who are buried at the shrine were alive today, “They would cry and cry and weep for the situation that this mosque had reached. If they had weapons, they would kill anybody who attacked and raided this mosque.

These days, the ancient burial site seems to inspire more and more burials.