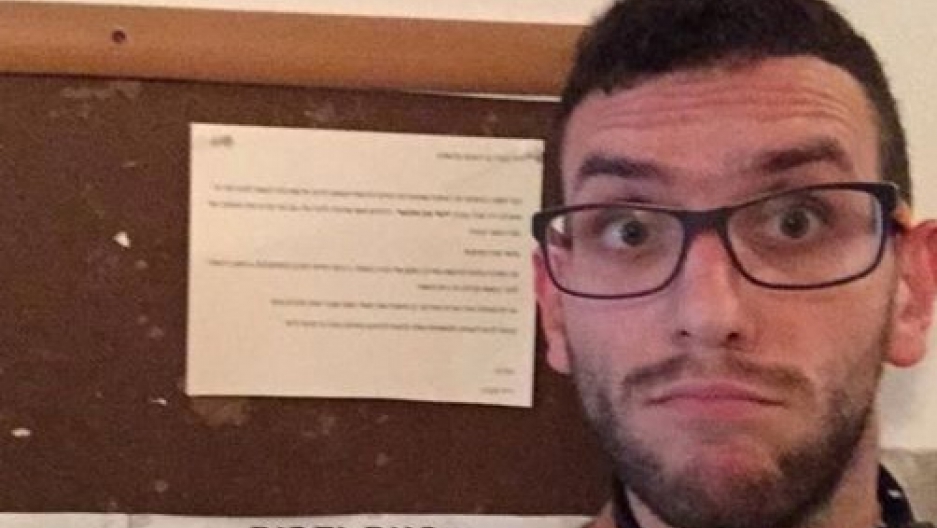 Ziyad Abul Hawa came home one day to find this note about "an Arab" — him — living in his Tel Aviv apartment building. So he took a selfie next to it.

In the past three weeks, Ziyad Abul Hawa has received dozens of media requests. The 28-year-old Palestinian has become famous in Israel for the matter-of-fact way he stood up to hate — by taking a selfie next to a racist note left by one of his neighbors in Tel Aviv.

Ziyad had been living for years in his central Tel Aviv apartment block, but earlier this month, amid increasing violence in Jerusalem and the West Bank, one of Abul Hawa’s neighbors apparently decided it wasn’t safe to have an Arab in the building.

“Due to the security situation,” the note read, “I don’t think we can allow ourselves to be indifferent and do nothing about the fact that there is an Arab residing in our building. His name is Ziyad Abul Hawa and he lives in apartment 4.”

When Abul Hawa saw the note, he figured there was one just one thing to do: “I took a selfie, of course, and I put it on my Facebook.”

Then he went upstairs to show the note to his partner, Yossi.

“Yossi was sleeping. I said, ‘You need to see this’,” Abul Hawa recalls.

Abul Hawa’s friends shared his selfie on Facebook and soon it had more than 6,000 likes and 500 comments.

“At the beginning I was like laughing at it with my friends and it was funny. And then random people I didn’t know started sharing and within an hour, I don’t know how, almost every TV program and newspaper in Israel knew my phone number,” Abul Hawa says. “The phone didn’t stop ringing for hours.” 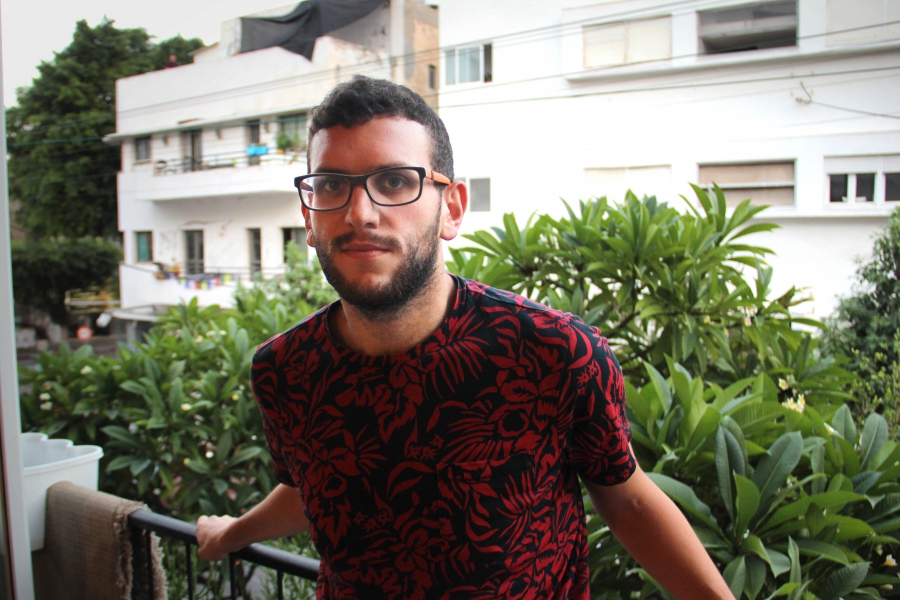 Ziyad Abul Hawa says he still can't get over the amount of attention he's gotten for his selfie.

There is nothing typical about Abul Hawa. He was born in Spain to a Palestinian father from East Jerusalem and a Palestinian mother born a refugee in Syria. When he was 9, just after the signing of the Oslo peace accords, his family returned to East Jerusalem. When he was 19, he moved to Tel Aviv. He now works at an insurance company and lives in a predominantly Jewish area. And earlier this year, he married his Jewish-Israeli boyfriend, though it’s unofficial because there’s no legal same-sex or inter-faith marriage performed in Israel.

It’s possible that his neighbor never would have known there was a Palestinian living in the building, except that two years ago, Abul Hawa put his distinctly Arab name on his mailbox.

“Until I put the sticker on, [the postman] didn’t put my mail in the box,” he says.  “Probably the postman didn’t think there was an Arab living in this building.”

Most of Israel’s population lives in separate communities, despite the fact that around 20 percent of Israel’s citizens are Palestinian. Abul Hawa says this wasn’t the first time he’s faced racial profiling in Israel.

“In airports I always get the Arab treatment,” he says. “Like, you’re a terrorist until you prove otherwise.”

He says that Jewish Israelis often don’t realize he is Palestinian.

But the note from an anonymous neighbor may have been the most personal attack he’s experienced. The note called for a meeting on October 15 “to discuss the situation and decide what can be done.”

Abul Hawa says, in the end, some of his neighbors and other Jewish Israelis came to his defense. On October 15, hundreds of people, alerted by a Facebook, showed up at a rally in his name in a nearby square. Meantime, the room in his building where the meeting was supposed to take place was locked. And so far there’s been no attempt to reschedule it, and no word from the anonymous neighbor.

Abul Hawa says he still can’t get over all the attention from his selfie.

“People are dying in the streets,” he says, “and this the only thing you have to put on TV?”