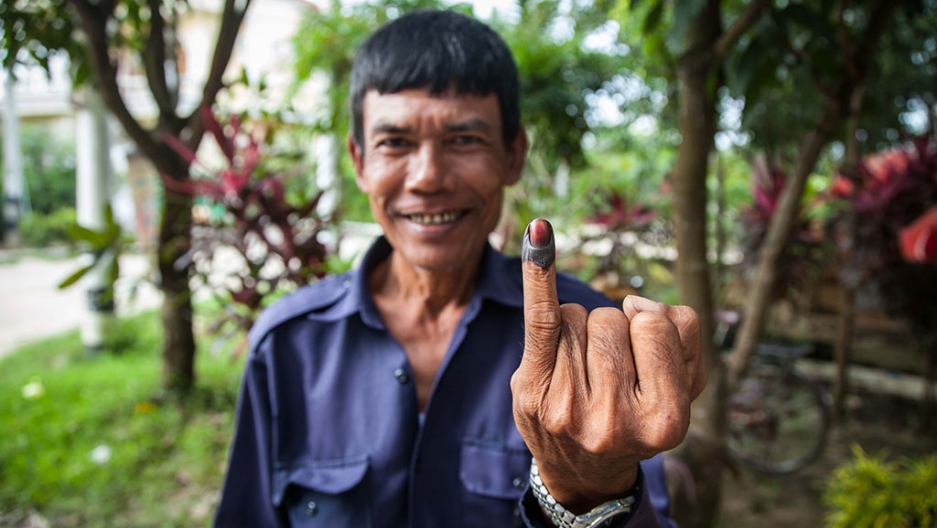 YANGON, Myanmar — For five decades, they ruled over Myanmar as tyrants. They plundered its wealth, neglected the poor and tortured their critics.

Then Myanmar’s military, through its ruling proxy party, asked a huge favor from the population it has tormented.

On Sunday, Nov. 8, the nation held its first quasi-legit election in more than half a century. And the ruling military-backed elites pressured the public to overlook their misdeeds and let them hold power.

It was a tough sell. It didn’t help that their chief rival was the party of Aung San Suu Kyi, a US-backed icon of anti-military defiance who happens to be the most famous person from Myanmar to have ever lived.

Voters didn't buy it. The ruling party — the Union Solidarity and Development Party (USDP), the army’s political wing — conceded the election on Monday, and Suu Kyi's opposition party, the National League for Democracy, looks set for a landslide victory.

More from GlobalPost: The military just got crushed in Myanmar

So what did the ruling faction's failed pitch to voters looks like? GlobalPost was on the campaign trail with USDP candidates in the lead up to the election. Here's what we saw.

One of their top tactics: persuading the public that sudden change could lead to chaos.

“We have deep divisions of race, religion and ethnicity here in Myanmar,” said Zar Chyi Linn, 35, a USDP candidate clad in a teal dress, embroidered with sparkly sequins, and a twinkling amulet strung around her neck. “Madness could break out if we lose our current system overnight.”

Myanmar’s government was not subtle in pushing this menacing message. A pre-election video released by the president’s office compiled footage of Arab Spring mayhem: flaming cars, bloody riots and rebels firing rockets. This was the government’s vision of potential horrors that could break out if Myanmar were to attempt rapid change.

The montage of chaos even included the iconic photo of Aylan Kurdi, the Syrian refugee toddler who washed ashore on a Turkish beach. Using this image as campaign fodder wasn't merely shocking. It was sadly ironic. Waves of refugees, from the Myanmar’s mountains to its coasts, have long fled the Myanmar military’s abuses with children in tow.

The military’s dictatorial style may indeed prove to be a liability for USDP candidates, Zar Chyi Linn said. She was careful to project an upbeat persona that counteracted the image of a domineering junta.

“I know some army officials still like to order people around. They mean well though we realize people don’t like being told what to do,” she said. “But the army remains the most organized institution in the country. The whole nation can learn from their leadership skills.”

While campaigning through Yangon’s outskirts, where barefoot kids and loose dogs roam the streets, Zar Chyi Linn presented voters with a chipper appeal to the army’s strength and stability.

“We’re devoted to change too,” Zar Chyi Linn said. “But we can’t change everything overnight. We need a systematic, step-by-step style of change.”

Myanmar has indeed changed since 2011 when the military junta shifted power to a parliament led by the USDP, its de facto political wing.

With the US cheering along, the government began to crack its shell of autocratic laws that had turned the country into an isolated police state.

Mobile phones were allowed to proliferate, Facebook was unblocked and political prisoners were freed — all in an effort to modernize the nation and rehabilitate the government’s dismal image.

But the trauma caused by decades of military misrule would be hard to erase.

“If I start complaining about the military, we’ll be here all day,” said Nyi Nyi Min, an 18-year-old college student eating at Myanmar’s first-ever KFC, which opened months ago following a rollback of US sanctions.

“The army’s changes are welcome,” he said. “But Aunty Suu [a favored name for Aung San Suu Kyi] deserves to rule instead of some army commander. No one actually believes we’ll have a bloodbath if we elect her.”

“People are used to thinking the absolute worst of our military,” said Kyaw Thu Ya, a 32-year-old candidate with a party called the National Democratic Force, which favors Denmark-style “social liberalism” for Myanmar. “If our flip flops break while crossing the street,” he says, “we blame the military.”

Dozens of voters randomly approached on the street by GlobalPost spoke of the military with contempt. This was in itself remarkable: just five years ago, under all-out junta rule, public dissidence was punishable by long prison sentences. But many seemed genuinely anxious that the election could be voided and full-on despotism could return.

“Trust me. It’s in the back of everyone’s mind,” said Naung Naung, a 45-year-old electrician in Yangon. “The righteous team is about to win. We keep wondering how long they’ll let us get away with it.”

The ruling party was almost certainly aware that its election day prospects were grim.

The government’s campaign rallies were spiritless and hollow. A 500-person USDP caravan joined by GlobalPost was stacked with cheering “supporters” who, when questioned, conceded they were low-level civil servants given the day off and ordered to attend.

The rest of the campaign cheerleaders were garment stitchers brought along by a factory owner with connections to the party. “To be honest, I also love Aunty Suu,” said Aye Aye Win, the 38-year-old factory boss who brought 70 workers to join the parade.

She too had “deep grievances” with the military, she said, after officers seized 100 acres of farmland from her family in the 1990s. “But I’ve moved on. Supporting the USDP offers more to gain for me at the moment.”

Other USDP supporters were compelled by its message of fear — in particular a delusional paranoia that the mainstream Buddhist faith is besieged by nefarious Muslims.

An influential faction of monks known as Ma Ba Tha, which backs the USDP, successfully pushed a bizarre conspiracy theory: Muslim men, they say, are scheming to marry and impregnate Buddhist women in a plot to demographically dominate the nation.

The USDP positioned itself as a protector of the faith. Asked by GlobalPost to define the word “democracy,” one 50-year-old female Buddhist USDP supporter explained that “democracy means having rights. Like the right to defend your own race.”

They are not foolish enough to surrender their power through a truly free election. Though the election is a massive step forward for Myanmar, it has been orchestrated to ensure that the military’s power is not flushed away.

No matter how large the NLD's victory, 25 percent of parliamentary seats will be reserved for unelected military officers. Aung San Suu Kyi cannot become president thanks to an army-devised constitutional clause. And it is also widely understood that the army, along with the police, will not be fully beholden to the victorious party.

The military has promised that, no matter the outcome, power will be peacefully transferred to the victors.

“We hope for the best,” Aung San Suu Kyi said days before the election. “We are prepared for the worst.”