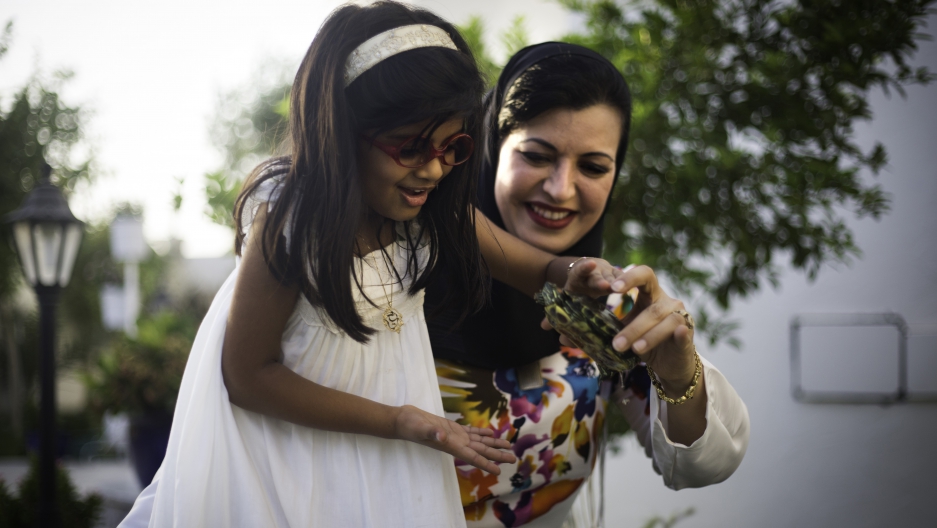 Ayesha Albusmait, and her daughter, Reem Abdullah Rashid. Albusmait is one of the small, but growing number of single Emirati woman choosing to adopt.

In a spacious villa in a corner of Dubai, Reem Abdullah Rashid plays contentedly in a small tent. She’s five.

“This is my secret tent. You can whisper anything in mommy’s ear — it’s a secret tent,” she explains, as I try to wedge my adult self into the tiny canvas opening.

It was in this tent that Reem’s mother, Ayesha Albusmait, told her daughter the facts about their non-traditional family unit.

“I noticed from European people and [children’s] stories that always the tent is used for secrets, so I grabbed the chance,” Albusmait says.

She told her daughter that she had two secrets — the first that she loved her, and the second: “I got you from my heart, not my tummy.”

Albusmait, 49, is at the vanguard of a small, but growing number of single professional Emirati women who have chosen to adopt. Dubai’s Community Development Authority has a waiting list of about 50 prospective adoptive parents — a fifth of them are single Emirati women.

“I encourage the single mothers to go for adoption more than even the families. There are kids that need families and there are mothers — they also need families,” Albusmait says.

Albusmait says she never consciously rejected getting married; it just didn't happen. But she did want to have a child. When she told Reem in the tent that she was adopted, she says her daughter took the news with ease.

Still, it’s a complicated issue. Emirati culture is deeply traditional and single parents are incredibly uncommon, while adoption remains a contentious issue across the Muslim world.

Many believe that adoption is "haram," or forbidden, in Islam. According to Natana Delong-Bas, an assistant professor at Boston College, and editor-in-chief of The Oxford Encyclopedia of Islam and Women, adoption — as in taking on the family name and being considered a full heir with the right to inherit from the family — is not permitted in classic Islamic law.

“It’s believed that it’s very important for a child to know who their biological parents are and to be able to trace back to their actual family heritage,” Delong-Bas says. “But foster relationships, in which a family takes a child in, provides for them, and raises them in their own home …has been practiced historically.”

And while Albusmait refers to Reem as her daughter, she says Reem retains her biological family’s name.

Albusmait was apprehensive when she first told her family that she was planning to adopt, but she says that they’ve been very supportive, though at first some of her relatives didn’t understand.

Since then, Albusmait has spoken publicly about the path she’s taken, hoping to provide support for other women wanting to follow in her footsteps.

“Even the married people, they don’t talk about adoption. I talk about it because I have a message for my society…[adoption] is the most important thing for society to accept.”