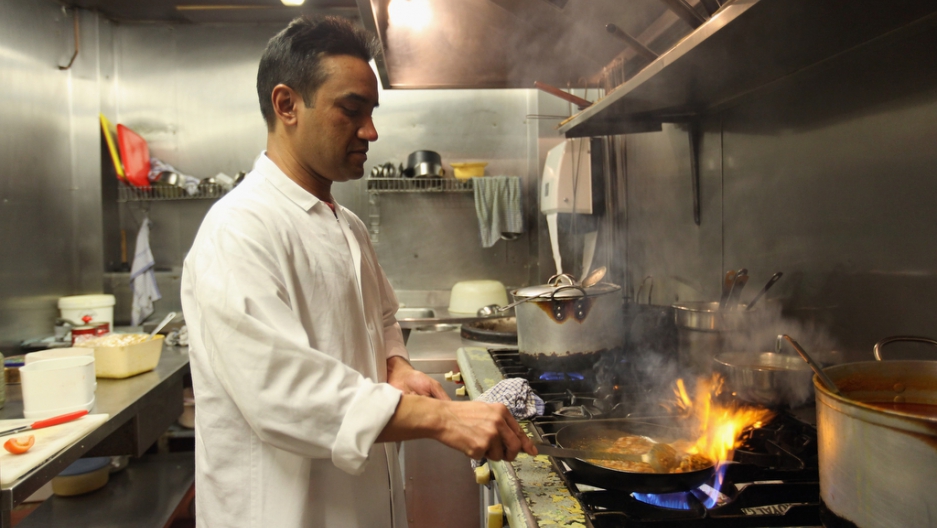 Britain is facing a curry crisis.

Sourcing the right ingredients to make spicy dishes like chicken tikka masala or jalfrezi, two of the most popular curries in the country, isn’t the problem.

Rather, it’s finding the skilled chefs to cook them.

Immigration restrictions have created a severe shortage of chefs from South Asia. It’s become an acute problem in recent years as the first generation of mostly Bangladeshi chefs who opened curry houses (as they are known in the UK) in the 1950s and 1960s retire from the kitchen.

Britain only accepts a certain number of skilled migrants from non-European Union countries every year and requires they be paid at least 29,570 pounds (more than $45,000) a year. Pay that high is hard to offer at family-owned curry houses, which often employ as many as two chefs and eight kitchen and wait staff.

At least two to three curry houses are closing every week, said Oli Khan, a chef and senior vice president of the Bangladesh Caterers Association UK, which represents more than 12,000 curry houses across Britain.

Khan told GlobalPost he feared the industry could “collapse” in four or five years unless the government relaxes its immigration restrictions and reduces the minimum salary requirements.

While many of Britain's curry houses are family owned and operated, fewer young people are interested in taking over their parents' business when they retire, said Khan.

Educated and armed with university degrees, most are choosing higher-paying professions outside the kitchen.

For decades curries have ranked among Britain’s favorite dishes, alongside fish and chips and a Sunday roast. The British developed a taste for spicy Indian food over centuries of colonial rule. The first curry house opened its doors in London in 1809. More than 200 years later, and nearly 70 years after India gained independence, curries remain hugely popular in the UK.

The UK parliament has its own curry committee and it’s common for revelers to end their boozy Friday and Saturday nights with a chicken tikka masala.

But it's not just the food that's at stake.

Curry houses employ roughly 150,000 people and generate 4.5 billion pounds (nearly $7 billion) in sales every year, according to Khan. In other words, it's a significant part of the British economy.

Leaving the EU could be the solution, according to Paul Scully, who heads the all-party parliamentary group on the curry catering industry.

"... By leaving the EU and controlling our own borders, we would be able to be more flexible in our immigration policy when tackling unintended consequences with our traditional Commonwealth partners, such as the shortage of skilled curry chefs," Scully, a Conservative MP, wrote on Facebook.

And "curries may well be tastier after Brexit," he said.

Another option would be to train Brits or Europeans to cook curries. But that's easier said than done, according to chefs.

Making the perfect curry is an “art” that was learned over many years, Khan said. “It’s in our blood and we have the vast experience.”

Another problem is language.

“When it gets busy in the kitchen and you start shouting in Bengali, it’s difficult for a Romanian to understand,” Mohammad Azad, the executive chef at Cafe Saffron in Shrewsbury, told The New York Times.