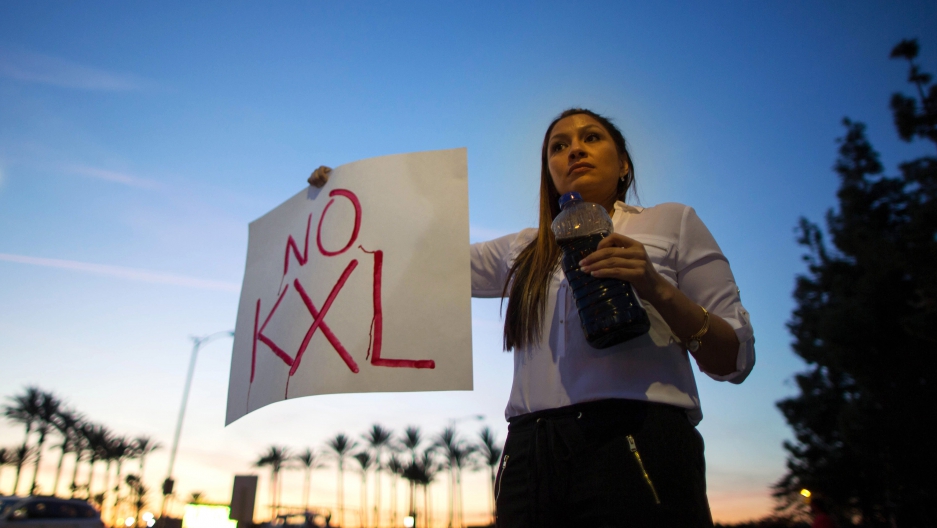 Opponents of the Keystone XL oil pipeline planned to run from the Alberta tas sands to refineries in the US finally got their wish on Friday when president Obama pulled the plug on the project.

If you run into an oil man in a bar, you might want to buy him a drink. It’s been a bit of a tough week for the business. It was the end of the line for the Keystone XL pipeline, and possibly the beginning of big trouble for ExxonMobil concerning what it knew when about climate change.

On Friday morning, after years of study, President Barack Obama pulled the plug on Keystone XL — one of the most hotly-debated infrastructure projects in the US in the past decade.

He made the call just hours after getting the recommendation to reject the project from Secretary of State John Kerry.

The pipeline would've carried an especially dirty kind of oil from the tar sands of Alberta, in western Canada, to refineries across the border in the US.

But he did say that Keystone was not in the country's national interest as the world tries to fight climate change.

"America is now a global leader when it comes to taking serious action to fight climate change,” Obama said in making the announcement at the White House. “And frankly, approving this project would've undercut that global leadership. And that's the biggest risk we face. Not acting.”

The move is predictably angering Republicans and some Democrats, who said it would bring a bump in construction jobs. And it’s predictably being hailed by greens, who see it as victory on an important point of principle in their campaign against fossil fuel pollution heading into another big global summit on climate change later this month.

The question of knowing about the risks of climate change and not acting is also at the heart of the week’s other significant oil business news.

On Thursday it was revealed that the New York State attorney general is investigating ExxonMobil, one of the world’s largest petroleum companies, for possibly misleading the public and its shareholders for years about the risks of climate change.

The move follows investigations by Inside Climate News and the Los Angeles Times of ExxonMobil's involvement in climate change research going back to the 1970s.

Inside Climate News reporter Lisa Song says their investigation found that ExxonMobil was “very much aware of climate change science” as long ago as 1977, and that company scientists had briefed top executives about both climate change and the role of fossil fuel combustion in driving the rise of CO2 in the atmosphere.

The reporting team also found that Exxon went on to conduct its own rigorous research, which confirmed both the reality of climate change and the potential risks that tighter regulation of fossil fuel might present to the company’s bottom line, but that it didn’t file an in-depth discussion of the issue with the Securities and Exchange Commission until 2009.

Exxon has challenged the reporting of the two news outlets, but Song says the company has not asked Inside Climate News for any corrections.

ExxonMobil has acknowledged receiving a subpoena from New York’s attorney general. Company officials have yet to comment on its specifics, but they deny that Exxon misled the public or shareholders.

Ken Cohen, the company’s vice president  for public and government affairs told reporters in a conference call Thursday that “beginning in the last decade, we’ve informed shareholders and investors on our perception of the business risks associated with climate change through regulatory filings, our annual corporate citizenship report, and in other reports to shareholders.”

“We are proud of our record of disclosing to investors ... what we believe are material facts applicable to our business” Cohen said.

The question, Song says, is whether the company disclosed those risks in a timely fashion.

“We found ... that the company was doing peer-reviewed climate science starting from the 1970s,” Song says. “But at the same time, starting around 1989, their executives were making statements that contradict what their own scientists were writing about and researching. Whether or not that is considered illegal or leads to any action is up to the (New York) AG's office.”