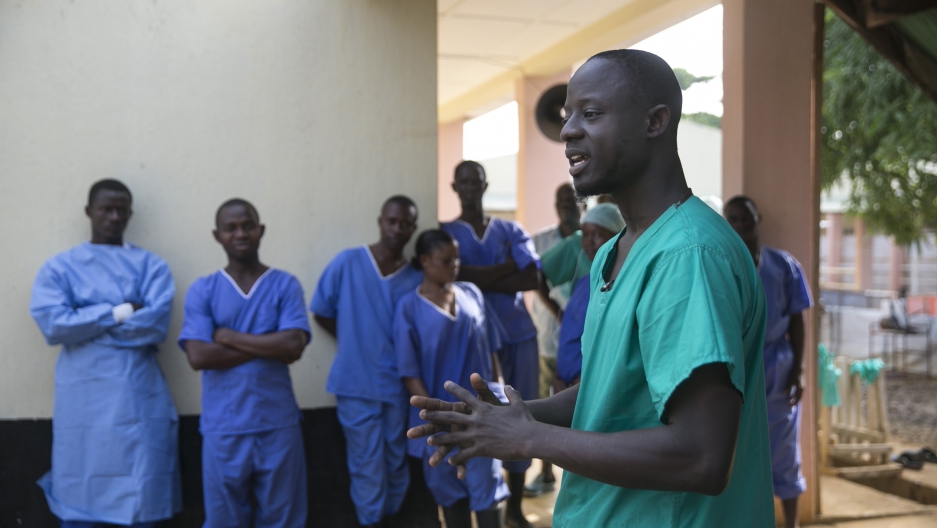 Hospital staff in Freetown at the height of the 2014 outbreak. A vigil is being helding to remember the 200 medical staff who died during the outbreak.

If everything goes according to plan, Sierra Leone will begin a new chapter of its history Saturday.

November 7 marks 42 days without a single declared case of Ebola in the country's borders. According to the World Health Organization, that means Sierra Leone can be officially considered free of the disease.

It's a turning point that is being met with both celebration and commemoration in the capital, Freetown. "It's excitment all around, in the North, the South and the East and the West," the BBC's Umaru Fofana said. "People are really counting down — virtually everyone is looking at their clocks, and their watches. Counting the hours! It's been like, forever. People are holding their breath."

In Freetown, the night will be marked with a vigil and the solemn reading aloud of the names of 200 healthcare workers who died confronting the virus.

There are official warnings, however. Neighboring Guinea has still not been declared free of the disease, and around 10,000 people are estimated to cross the Sierra Leone-Guinea border a day, according to Fofana.

Rueben Koroma is counting down the days until Sierra Leone's status is changed.

He fronts the Sierra Leone Refugee All Stars, one of Africa's top touring bands. The band has been more or less stranded in the US, unable to return home, since the outbreak occurred.

"I feel very good, I feel very blessed, I feel very relieved from the frustration that I was having. It's like a deliverance to me," says Koroma. "Ebola is really like a stumbling block. It stopped the interaction of people. When people interact, that's how they do better things, and developmental projects for example, so it was bad really. It claimed the lives of thousands of people in Sierra Leone."

"I lost a close personal friend; I would say a brother. He was a friend to my family. He was called Mr. Mansuri," says Koroma. Still, he and his fellow band members consider themselves fortunate that their immediate families back home are OK. They have survived and will now be among those in Sierra Leone who have to move on and rebuild their lives.

This weekend, the All-Stars perform in Phoenix, where Koroma says he will use the concerts to help celebrate his country's resiliency. "I think it’s a good thing that our country is able to overcome this monstrous disease. ... I have to really tell people how happy I am because of this news." He's hoping the band will be able to return to Sierra Leone next year when their US tour concludes.