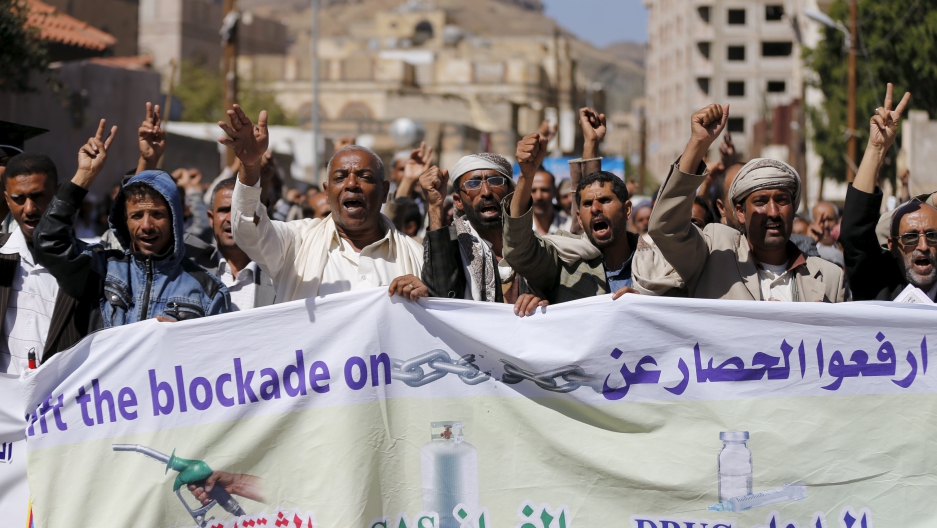 Aid has begun to reach Yemeni victims of Cyclone Chapala. But as serious as the storm was, international aid workers are concerned about an even bigger problem: Yemen's civil war.

On Wednesday relief flights from Oman and the United Arab Emirates brought tons of aid to Socotra, the Yemeni island that was first struck by the cyclone. And the International Committee of the Red Cross said it was working in close partnership with the Yemeni Red Crescent Society to supply the needs of storm survivors in Al Mukalla, the mainland Yemeni port city of 350,000.

#Mukalla residents say no help is coming, either from AQAP/tribal authorities or from outside. https://t.co/y8HIGC0IX8

"We provide them with ... the food, the water and the tents to respond to the aftermath of cyclone," says Rima Kamal who works for the ICRC in Sanaa. But recovery may take some time. Thousands of Al Mukalla residents have been forced to flee the city.

Mukalla is a GHOST CITY after powerful #Chapala Storm forced 100,000's to flee for their lives #Yemen #اليمن pic.twitter.com/YQYkl0HHmV

"People have had to leave their homes, [which are] now fully or partially destroyed," says Kamal. But she dismisses concern about the local branch of Al Qaeda, which holds political control in the city.

"To be honest, [Al Qaeda] has not complicated it," she says. "What has complicated the relief operation is primarily the damage [to the infrastructure] we have seen in the area." Coastal roads in Al Mukalla have been washed out. High-tension power lines have collapsed. Communication networks have been down. "These have actually been the main challenges facing relief organizations trying to reach people affected in Al Mukalla."

"Of course it is important to focus on the suffering and the damage caused by the cyclone," says Kamal, "but at the end of the day three people died from Cyclone Chapala. You have 30 people dying every day because of lack of access to health services, because of war wounds from the fighting on the ground, and from the air strikes as well."

Yemen's civil war, which began in earnest at the end of March, has killed more than 5,000 Yemenis, including at least 2,300 civilians, according to United Nations figures.

"Yes, the cyclone was extremely unfortunate and it has hit Yemen hard, but it has been passing and it will end," Says Kamal. "But then you have the larger conflict which is ongoing, which at this point in time does not seem to have an end in sight, and which is the primary reason and cause of the suffering of the Yemeni people."

Kamal says it is important to remain focused on the big picture. "We can do something to stop this conflict," she notes. "Import restrictions must immediately be lifted. Goods must be allowed into the country. And a political solution must be found."

But Kamal has a note a weariness in her voice. "As a humanitarian organization, we're not able to keep patching up a situation that just keeps getting worse all the time."