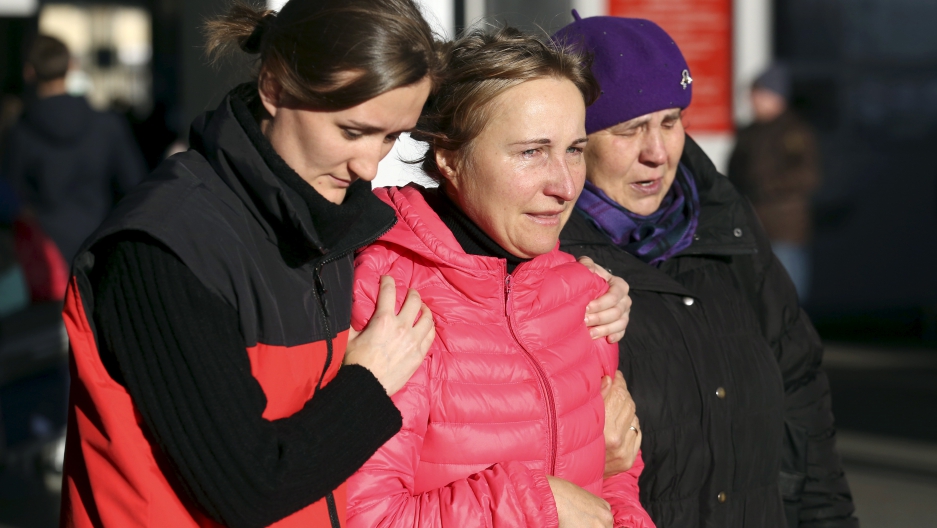 People at St Petersburg airport wait to hear news of passengers on the Sharm el-Sheikh flight. All but five of the victims were Russian citizens.

The loss of 224 lives in last weekend's air crash in Egypt has had a profound effect on public opinion in Russia.

All but five of the victims were Russian citizens, most of them tourists visiting the Middle East on vacation. According to the BBC's Raphael Saakov, the disaster has been felt strongly in major cities, where many of the victims lived.

"People are grieving here in Moscow and St Petersburg," he said. "People are shocked. It’s the worst airline tragedy in Russian history."

According to Saakov, the sense of national mourning has been reflected in local media coverage, including on pro-government TV channels. Nevertheless, state controlled media has been wary of citing a reason for the crash.

"Russian media is mostly under government control ‚ and they cannot rule out that terrorists had a hand [in this disaster]." Saakov says. "[They say] we need to wait for the answers." It was noticeable that President Putin waited several days to comment, and has so far refused to speculate on whether terrorism is involved. He has since described the disaster as an 'enormous tragedy.'"

Egyptian authorities have been similarly cautious. Egyptian President Abdel Fattah el-Sisi told the BBC that ISIS' claim to have caused the crash was merely "propaganda" designed to harm his country.

"This is one way to damage the stability and stability of Egypt and the image of Egypt', he said. So far the investigators have only said that the disaster was caused by 'external factors', which appears to rule out pilot error or an accidental malfunction, and leaves open the possibilty of a deliberate attack.