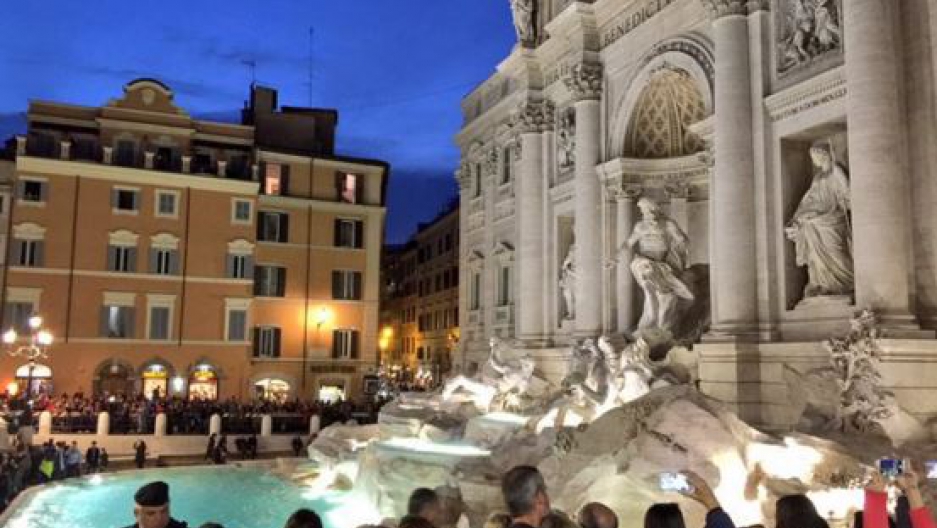 Rome's Trevi Fountain is back on again to the delight of locals and tourists, but there's still a hefty fine if you try to jump in.

Rome's Trevi Fountain is once again gurgling and gushing up. People crowded in this afternoon to watch the Rome's landmark fountain turned on. It's been closed for restoration this past year and a half.

“I’m actually standing just in front of the fountain about to get wet,” says tour guide Brandon Shaw, who runs the Roman Guy tour agency and likes to take visitors to the Trevi Fountain. “It’s just been cleaned and it’s the whitest I’ve ever seen it. You have to imagine a beautiful palace from the 18th century all in white, and attached to it is a fountain that goes into the water with this natural rock formation. It looks simply amazing. It’s by far the most beautiful fountain in the world.”

The Trevi Fountain was commissioned by Pope Clement XII in 1730, engineered and constructed over a period of decades. Shaw says the fountain marks the end point of one of the ancient aqueducts that supplied ancient Rome with water, “and where I’m standing, this is where the actual aqueducts itself ended, it’s the terminus of the Aqua Virgo built at the end of the 1st century, BC.”

“The Trevi Fountain is incredible,” says writer Erica Firpo (@Moscerina ), who lives in Rome. “What you’ve got is Oceanus, a Poseidon-like god, who’s reining in sea horses and Tritons, and water cascading down across rough and tumble cliffs and foliage into this big basin. He’s guiding all of it and standing in this epic Roman-arched niche letting you know that this is the best water in the world.”

Shaw likes to describe for tourists the scene from Federico Fellini’s film La Dolce Vita starring Anita Ekberg and Marcello Mastroianni that put the fountain in the limelight: ”You have the beautiful actress Anita Ekberg, who wades down into the water in her beautiful black dress beckoning Marcello to come inside as well and spend some time with her inside of this fountain. Of course if you try to do that today, you’ll be fined 500 euros!”

“I jumped into it,” says writer Erica Firpo. “When Italy won the World Cup in 2006, part of the tradition is you run down to Trevi, and you jump right in.” She says nobody was fined on that occasion because “pretty much the entire city took a little bath in Trevi to celebrate.”

Firpo says she loves visiting the fountain early in the morning or late at night when the Travertine marble stone glows and there’s “a beautiful, beautiful whiteness overwhelming the whole piazza.” But she describes her favorite moment walking in from one of the side streets, “and all you hear is the water, tons and tons of water. That is my favorite part of the fountain. The water is deafening.”

Or watch it in this Live Cam.