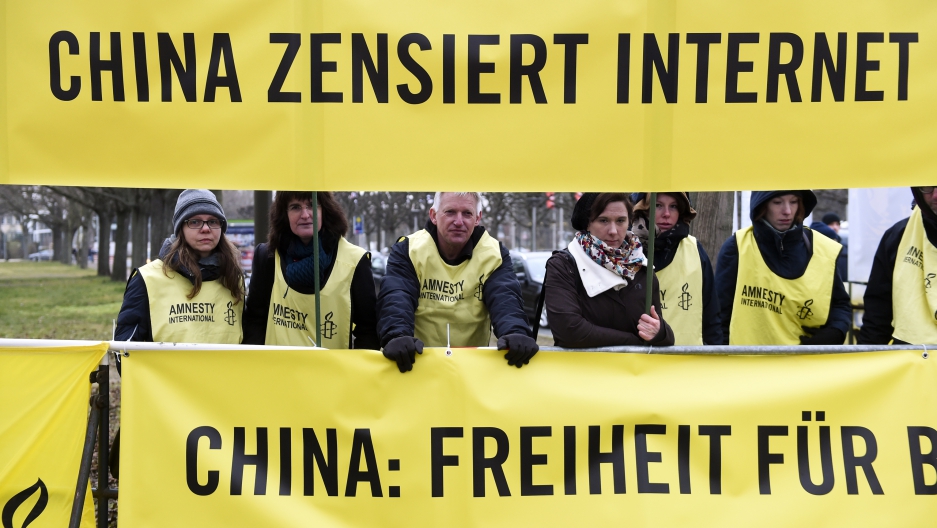 Members of Amnesty International take part in a rally against human rights abuses in China before the official opening of the CeBIT trade fair in Hanover March 15, 2015.The text reads "China censors internet. China:freedom for bloggers."

We’d all like to think that a simple browser and a few keystrokes can give us access to the unlimited knowledge base of the Internet. But there are a growing number of toll roads on the information superhighway.

According to the latest edition of Freedom House's annual Internet Freedom Report released this week, digital civil liberties have been curtailed across the globe for the fifth year in a row. There are now more countries with a heavily censored Internet than there are ones with a completely free Internet.

Last among the 65 countries assessed is China, which also happens to be the country with the largest number of internet users (641 million). Thanks to a new law passed last month, Chinese internet users are now even more vulnerable to criminal charges if they are found to be spreading “rumors” or politically delicate information online.

In the United States, President Barack Obama advocated for an open internet when the Federal Communications Commission was considering the question of net neutrality earlier this year.

"Ever since the Internet was created, it's been organized around basic principles of openness, fairness, and freedom,” the president said. “This set of principles — the idea of net neutrality — has unleashed the power of the internet and given innovators the chance to thrive.”

But America isn’t first, second, or third on Freedom House’s list. Rather, the US takes the fifth spot after Iceland, Estonia, Canada, and Germany.

“The US is not quite first on the list, but we’re very high up, and we are among the countries treated as ‘Free’ by Freedom House,” says Susan Crawford, a professor at Harvard Law School and director of the Berkman Center for Internet and Society. “The important thing the report is telling us is that for many countries in the world — 32 of them they point to — freedom has been constrained over the last year when it comes to the global interoperable Internet.”

Of the 32 countries with declining scores, Freedom House says the largest drops in freedom came from Libya, Ukraine and France, respectively.

In the case of Libya, the report cites political censorship and violence against bloggers among the reasons for its declining score. As it fights a “propaganda war with Russia,” Freedom House docked Ukraine for prosecuting people that published content critical of governmental policies.

Meanwhile, the group said that France’s standing declined mainly because of “problematic policies adopted in the aftermath of the Charlie Hebdo terrorist attack, such as restrictions on content that could be seen as ‘apology for terrorism,’ prosecutions of users, and significantly increased surveillance.”

As more and more countries follow China's example and clamp down online, a great ideal of the Internet seems to be on the decline, if not already lost.

“The future contours of the Internet are definitely up for grabs,” says Crawford. “There’s this choice we’re facing — whether we’re going to have this network that provides humans with choices, opportunities, and self-determination, or whether China and Russia’s vision will be the prevailing one. The thing those two countries are more afraid of than anything else is an open Internet — it’s the thing they fight everyday. And that vision is increasingly being adopted by countries that want to control their citizens.”

Crawford says that it appears the world is in the throes of a critical moment for the global Internet, and that it’s up to countries with liberal policies to pressure others to keep connectivity open.

“Very interesting countries hang in the balance, like India, where 1.2 billion people could be online — only about a quarter of them are right now,” she says. “Cuba is just coming online, and so is much of Africa. Who are they going to follow? My hope is that they look to the United States, Australia, Canada, and the EU as a model of openness. Not just for economic purposes, but for the thriving of human beings.”