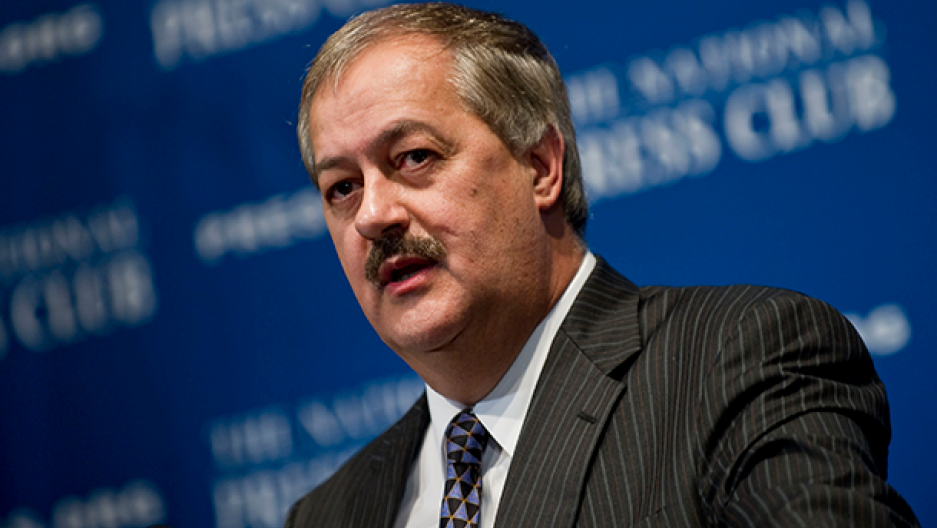 Former Massey Energy CEO Don Blankenship, the man once known as West Virginia's 'King of Coal,’ is on trial in connection with the deadly 2010 Upper Big Branch mine disaster in West Virginia.

On April 5, 2010, the worst American mine disaster in 40 years occurred at Massey Energy’s Upper Big Branch mine in West Virginia. A huge explosion ripped through the mine, killing 29 of the 31 men working there.

Surprisingly, Blankenship faces charges only indirectly related to the mine accident itself. Instead, prosecutors accuse Blankenship of lying to federal investigators and to the SEC about his company’s safety record.

“The indictment in itself is kind of unprecedented,” says Tim Murphy, who recently profiled Blankenship in Mother Jones. “There's nothing about the 29 deaths in a coal mine in this indictment, or in this case. In fact, Blankenship's lawyers have moved to make it something that isn't even mentioned at the trial, because the government isn't doing anything about its Upper Big Branch disaster.”

“So, it's not that he ran rough coal mines that racked up tons of violations and had a number of fatalities,” Murphy continues. “It’s that he wasn't being honest with Wall Street — and that's what threatens to send him away for about 26 of the 30 years that he's facing.”

“He helped build the West Virginia Republican Party basically up from scratch to the point where it now runs the state legislature and has a number of national elected positions in the state,” he says.

Blankenship ran Massey Energy with an iron fist, Murphy says, and his relentless focus on the bottom line was legendary. He demanded reports from his mine superintendents every half-hour. If he saw that coal wasn't moving in a mine, he would get on the phone. “In the case of the Upper Big Branch mine, that phone was literally a red phone. It was as if they're getting a call from the premier."

None of this is illegal, Blankenship’s defense team has pointed out during the trial; Blankenship was simply doing his job as a responsible CEO.

But Blankenship also built Massey by flouting federal mine safety rules, Murphy says. The prosecution contends that while publicly proclaiming safety to be his company’s number one priority, Blankenship repeatedly denied requests to equip his mines with necessary safety equipment and then lied to federal investigators about it.

According to MSHA, the Mine Safety and Health Administration, the accident at Upper Big Branch occurred when an accumulation of gas was ignited by a spark that came off a piece of shearing equipment that is used to cut through a long section of wall to get at the coal seam.

“According to the federal government, and according to the state's own independent investigation of the mine after the fact, virtually everything that could have gone wrong in this situation did go wrong,” Murphy says.

The foreward to the report by the Governor’s Independent Investigation Panel reads, in part:

The explosion was the result of failures of basic safety systems identified and codified to protect the lives of miners. The company’s ventilation system did not adequately ventilate the mine. As a result, explosive gases were allowed to build up. The company failed to meet federal and state safe principal standards for the application of rock dust. Therefore, coal dust provided the fuel that allowed the explosion to propagate through the mine. Third, water sprays on equipment were not properly maintained and failed to function as they should have. As a result, a small ignition could not be quickly extinguished.

Ironically, while Blankenship faces a jail term for lying to investors about mine safety, those same investors are watching the company go under, as the price of coal equities has crashed in recent years.

“I was talking to the miners in Matewan, West Virginia, when I was down there,” Murphy says. “As they put it, Don Blankenship is reading his company's obituaries in the newspapers — because Alpha Natural Resources, the company that bought Massey a few years back, declared bankruptcy just two months ago.”

“So at some level the indictment feels sort of like a bookend to the current age of King Coal,” Murphy concludes.