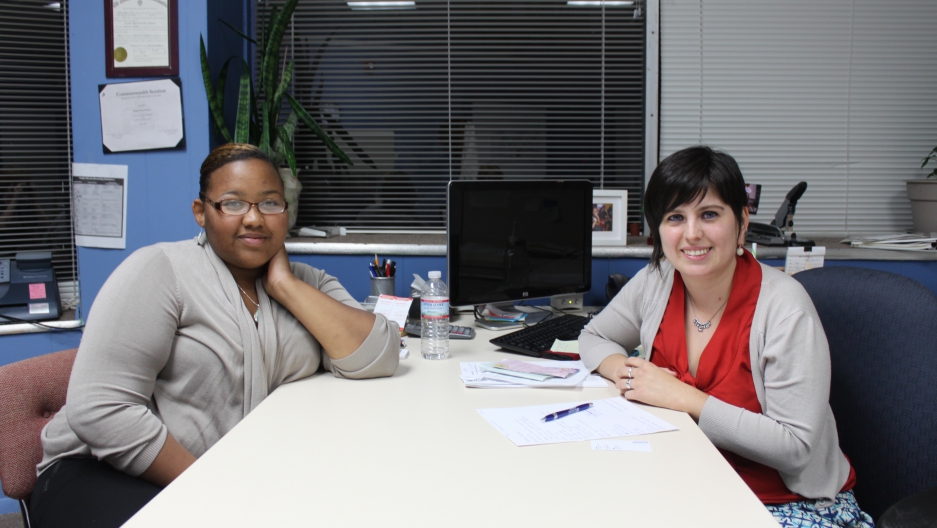 Yamila Pastorino (L) and Joana Dos Santos were both undocumented immigrants when they first enrolled at Mount Wachusett Community College in Massachusetts.

Joana Dos Santos came to the US from Uruguay in 2001 when she was 14. Her family was part of a large wave of migrants who moved north to the US when the economy back home collapsed. At the time, the US had a visa waiver agreement with Uruguay so it wasn’t hard to enter the country.

She came just in time to start high school in Fitchburg, Massachusetts, where she was lucky to land in a college access program designed to track kids and prepare them for the future. It also meant a rude awakening about her status as an undocumented immigrant.

“My first month I got called in by the guidance counselor,” Dos Santos told me. “They were preparing kids for college at a young age. They asked me, ‘So how are you going to pay for school?’”

That’s when Dos Santos learned how expensive college is in the US, how she would likely be charged much higher international student rates as an undocumented student, and that she would not be eligible for financial aid.

The federally funded college access program, Gear Up, was run by the local community college, Mount Wachusett. The program staff couldn’t bear to see Dos Santos and other undocumented students slip through the cracks.

“We graduated,” Dos Santos remembered, “and they were like, ‘Oh my God, these kids are really smart and they’re not going to be able to afford college because they’re undocumented. Are we just going to leave them? We brought them this far, we told them to work harder and they would get their education and be successful and now we’re not going to do anything?’”

So they took the matter to Daniel Asquino, the president of Mount Wachusett Community College. He remembers meeting with Dos Santos and another student.

“They had been in this country since they were children,” he told me. “They were not eligible for financial aid because they were undocumented, They had gone through our school system. And that was the end. Without financial aid they could not access higher education.”

It was a no-brainer for Asquino. The college worked with private donors to come up with some scholarship money so the students could attend Mount Wachusett.

“Morally and ethically,” he said, “I think if someone was brought over when they were a child, they didn’t even know the country they were born in, then I think we have an obligation to make sure they have the skills and education to succeed.”

Not everyone would agree with Asquino. Educating undocumented immigrants is controversial. Policies on access, tuition and aid vary widely across the country. Massachusetts is considered relatively friendly towards undocumented students, but even so, most can’t get in-state tuition or financial aid.

Even Joana Dos Santos, with her scholarship, had to cobble together her degree program from the catalogue of continuing education classes. She was not eligible for classes with full-time faculty unless she paid international student fees, which she couldn’t afford.

And she had to do community service in exchange for her scholarship money.

“I was volunteering for all sorts of things. The plate was really full,” she said.

But she did it. And during her second year her immigration status was resolved when her green card came through. She went on to do a bachelor’s degree at Fitchburg State and now runs a community center in Fitchburg that caters to other immigrants. She also sits on the board of trustees at Mount Wachusett Community College.

Her story is successful, but it wasn’t easy. She’s well aware what a challenge it can be to enroll at a community college and stick with it.

The day I met Dos Santos, she introduced me to a younger friend of hers, Yamila Pastorino. Pastorino has had a more frustrating educational journey.

She also came from Uruguay in 2001. She was 9. Like Dos Santos, she did well in Fitchburg public schools. She hoped to study business at UMass Boston when she graduated.

“When I started to look into the expenses, it was nothing I could afford,” Pastorino said. “And with no access to any help financially, even more so. If you’re not [documented], you can’t get financial aid, a loan anything. I was like, OK, I need to look for other options. And that’s when I found out I could go to the Mount.”

So Pastorino followed in Dos Santos’s footsteps at Mount Wachusett. But she’s had a tougher time. She also got some scholarship money and help from relatives, but between work and class and family obligations, she’s had to stop and start her education more than once since she began in 2010.

That’s not unusual, according to Marcelo Suárez-Orozco, Wasserman Dean of the Graduate School of Education and Information Studies at UCLA. He has studied the experiences of undocumented students in the US.

And then there’s the sheer stress of living undocumented. Things like worrying about your parents driving around town without driver’s licenses.

A couple of years ago, Pastorino came out of the shadows and signed up for the new DACA program, or Deferred Action for Childhood Arrivals. It means she has a work permit now, and has been able to find full time work as a medical secretary. She’s also eligible for in-state tuition rates at Mount Wachusett.

But it’s not a panacea. She’s still not eligible for financial aid. She intends to finish her associate’s degree in human services, but she’s not enrolled in classes right now.  She’s too busy working and supporting her parents and siblings. It makes her understand why some people give up. There’s just so much uncertainty on the road ahead.

Pastorino isn’t giving up though. And she’s advising others she knows to go to school and stick with it.

“There’s always some way,” Pastorino tells people. “You can do it. It’s going to take a little longer but you’re going to get there.”

Neither Pastorino nor Dos Santos can imagine their lives without Mount Wachusett.

“I don’t think I would have been able to go to college,” Dos Santos said. “It gives you confidence, because at least you started. If you don’t even have the opportunity to start, it’s very unlikely that you’ll finish. Community college is that opportunity to finish high school and to start college. At the end of the day what really matters is that you get your degree. That’s going to be what opens doors. A lot of students wouldn’t be able to pursue that if it wasn’t for community college.”

“If it wasn’t for the Mount,” I wouldn’t have started,” said Pastorino. “Like Joana said, at least you start somewhere.”

This story is part of a series on community colleges, "College Material." You can find the entire series here.