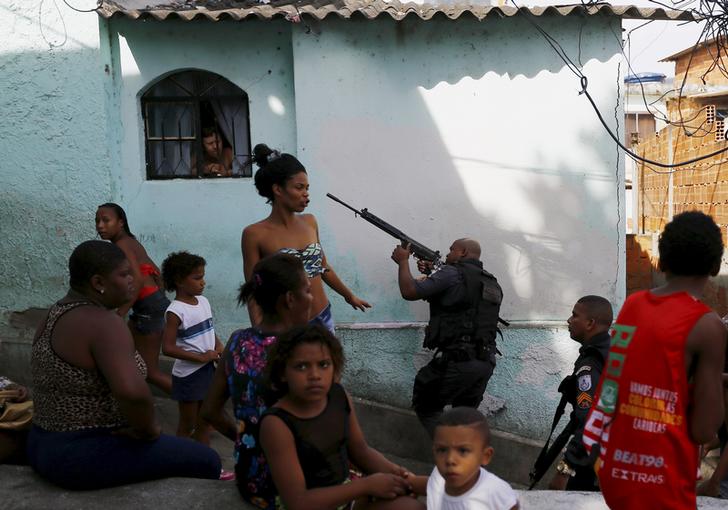 Residents observe as policemen take up position near an area where two men were found dead on top of the Sao Carlos slums complex in Rio de Janeiro May 15, 2015.

Rio de Janeiro’s police pacification program wasn't supposed to lead to angry demonstrators chanting about deaths in the crossfire of shootouts. But that has increasingly been the sound of 2015 in Rio.

It’s the year between the World Cup and the Olympics in Rio, and the city’s pacification program was scaled up in anticipation of both events. It originally aimed to be a calm, community-based police strategy that would better serve low-income neighborhoods, better known as favelas. Home to one in five Rio residents, the favelas often experienced police presence in the past only as high-casualty combat operations between police and drug traffickers.

Thirteen-year-old Cristian Andrade, shot in September when a police operation passed by as he played soccer in Rio’s Manguinhos favela, is just one in a string of alarming deaths in supposedly “pacified” favelas this year. For those who study pacification closely, that points to an initiative that has strayed from its original goals.

Sociologist Ignacio Cano, an early consultant for the program, says, “we should consider this kind of policing a harm reduction strategy.” Harm reduction means acknowledging that people are going to buy and use drugs — in order to minimize the violence and corruption that surround the drug trade.

Put another way, says Cano, the police stay in their part of the neighborhood, and the drug dealers stay in theirs. That way, kids can go to school and people can go about their lives without fear of getting shot. And the police can become trusted to deal with crimes like theft and domestic violence. 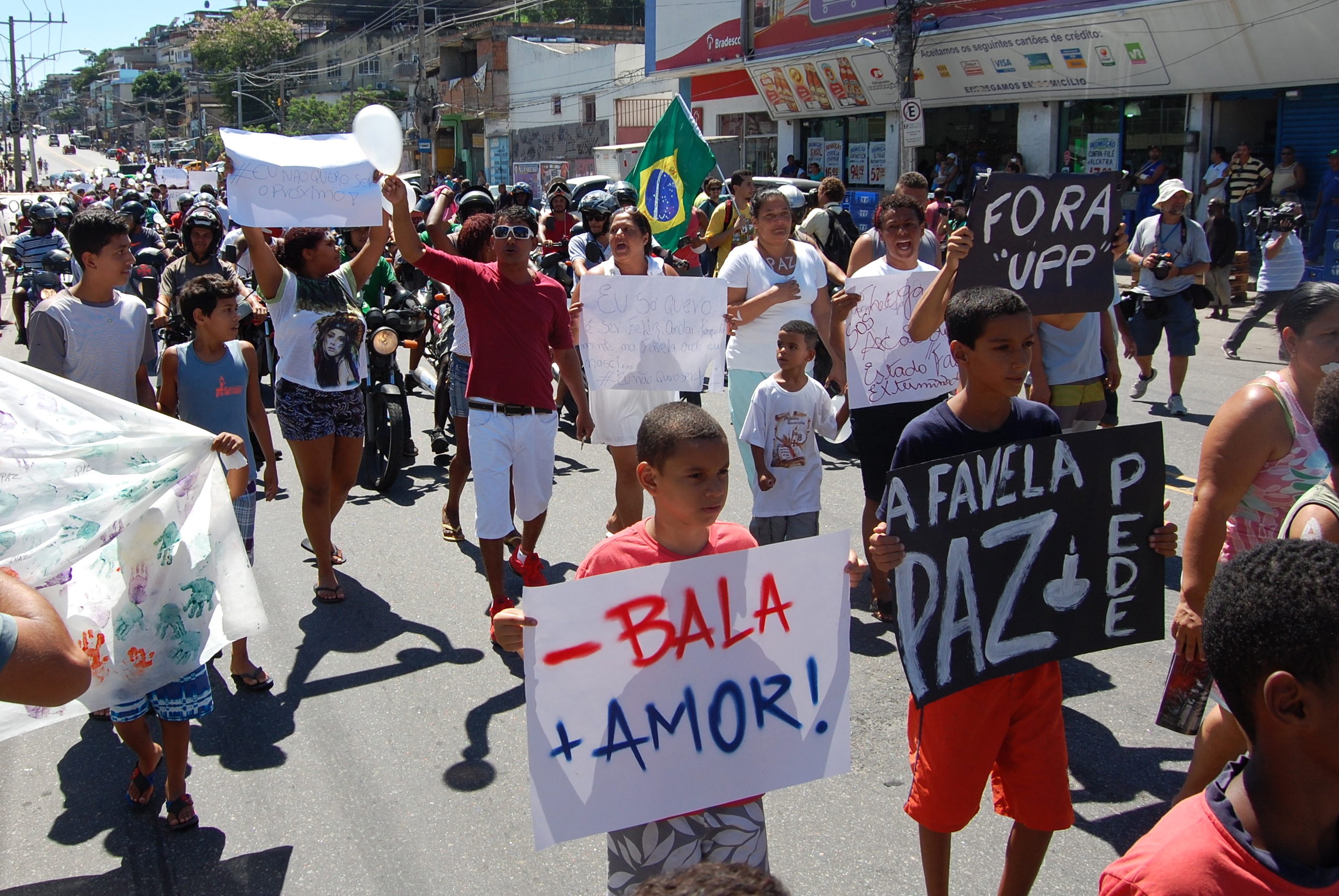 Residents of the Complexo do Alemão group of favelas protest the police killing of 10-year-old Eduardo de Jesus, in April 2015, during what became 100 consecutive days of shootouts.

“When you talk to people in the favelas, they want a police who is there to support them and try to make the territory safe,” says Julita Lemgruber, a sociologist at Cândido Mendes University who has closely tracked pacification. She adds that in 2000, a community policing program in the favela of Pavão-Pavãozinho proved that this strategy could work in Rio. It helped inspire the idea of “pacification police units,” or UPPs. But in the run-up to last year’s World Cup, the pressure mounted to impress onlookers by expanding the program.

“All of a sudden, they began to create UPPs everywhere,” Lemgruber says, which stretched the newly-trained pacification police officers too thin. With the World Cup getting close, Brazil’s federal government deployed the army to take over the Maré favelas near the international airport. Supposedly, this was to prepare the area for pacification. But now that the army has come and gone — at a cost of about $200 million — there is still no UPP in Maré.

“It accomplished nothing,” Coronel Robson Rodrigues, deputy commander of Rio’s military police, says of the army occupation of Maré. In addition, he says lessons from favelas where security has indeed improved have rarely been incorporated into officer training. Homicide rates in many favelas with UPPs have fallen, and police killings in the state of Rio overall have dropped from 1,330 in 2007 to 563 in 2014. But police killings are on the rise again this year, and 59 percent of officers want out of the UPP program.

Rodrigues says one mistake with the UPP was teaching community policing, what he calls “modernization” of tactics, to only part of Rio’s police force. Now, Rodrigues is trying to standardize training for all of Rio’s military police toward strategies where fewer bullets would be fired during work shifts. He says both police and society need to step out of a war that’s in their head.

“The war on drugs policy led us to mistakenly accept that we were going to war when there wasn’t a war. We created all this in people’s heads and actions, and principally in the police,” says Rodrigues.

This year in the supposedly pacified Complexo do Alemão group of favelas, most residents lived through 100 straight days of shootouts. Two who didn’t survive were 10-year-old Eduardo de Jesus, killed while sitting in front of his house, and 41-year-old Elizabeth Alves, killed in her living room. In the favela of Providência in September, a resident caught on video a pacification police officer firing shots into the air and planting a gun on the body of a young man he had killed. The police officer tried to claim he was acting in self-defense; investigations of such claims are rarely concluded in Rio.

As Rio’s big effort at community policing stumbles, influential names in the program are coming out saying that the War on Drugs as a whole has failed and drugs need to be legalized and regulated. Colonel Rodrigues is in favor of that. So is Rio state Security Secretary José Mariano Beltrame. In August, a Supreme Court hearing to decriminalize drugs for personal use was paused after the first three judges who got a chance to vote said yes to decriminalizing marijuana largely based on the harm drug traffic does to poor communities.

Ignacio Cano, the sociologist who consulted on the pacification program, says the War on Drugs “was a huge mistake, with huge costs, and one day we will wonder exactly how we devised these policies.”

Cosme Felippsen, a resident of the Providência favela, says he can’t believe a more peaceful day will come “until police are consistently held accountable for their abuses.” He says accountability could start today and is a question of political will.

If nothing changes, says Felippsen, “police officers and favela residents, who are both often poor and black, will continue to die,” while Rio pats itself on the back for what it calls innovative policing. 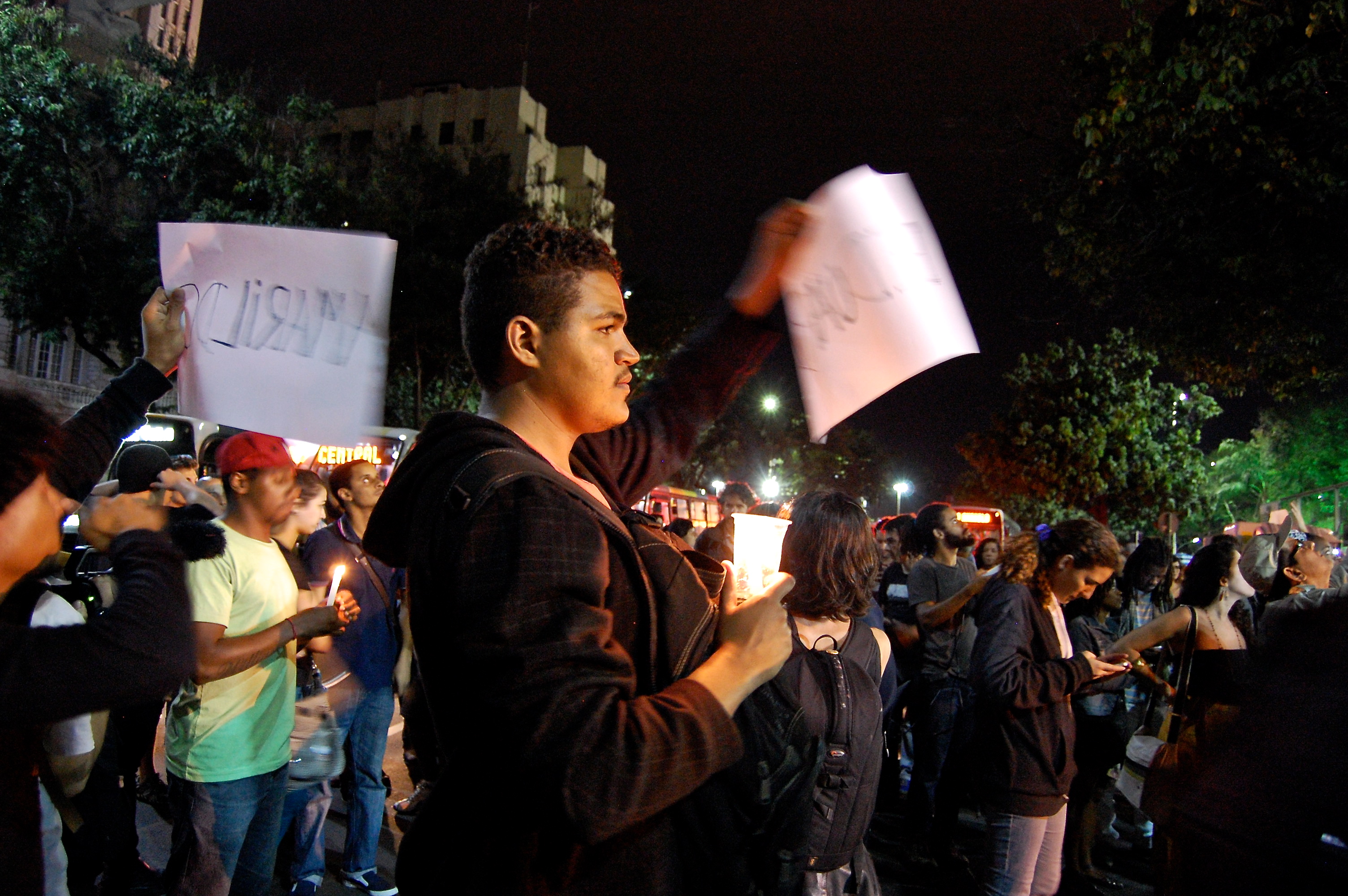 Cosme Felippsen, 26, resident of the favela Providência, demonstrates after 13-year-old Cristian Andrade was killed in September in a police operation in the favela Manguinhos, home to the pacification program.