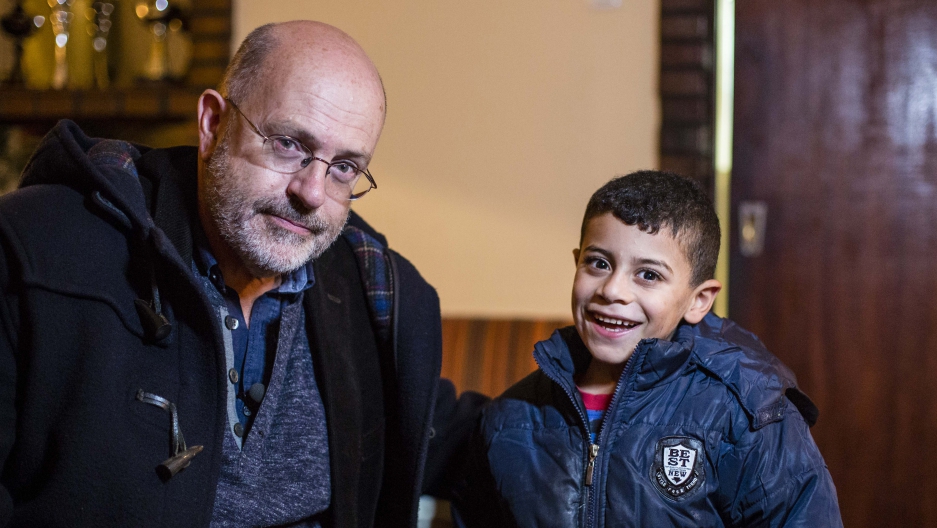 I met Azam in Serbia in September while making a documentary for BBC current affairs program Panorama, about the refugee trail through Europe. He was crying in pain while a medic was cleaning up his broken jaw. He'd been run over by a car while he was asleep.

My last glimpse of him was as he got into an ambulance. The doctor treating him said he'd have to stay for several days.

But two weeks later we found out that, before completing his treatment in Belgrade, he'd vanished with the uncle.

The Panorama documentary, The Long Road, sparked a social media campaign, #FindAzam. And, since it aired, my workmates at the BBC and the lads in the pub had been asking me only one question: "Have you found him yet?"

So I decided to see if I could do just that. For BBC Newsnight, we retraced the steps on the refugee trail that Azam and his uncle took, traveling almost 1,500 miles from Preshevo, the reception center in the south of Serbia where I first met Azam, to Hamburg.

We documented the journey on social media, using Twitter, Facebook, YouTube and Snapchat — and I blogged about it along the way. We translated the story into Arabic and Turkish — as far as we understood, Azam's parents were in Turkey. We wanted to do anything we could to increase our chances of finding him. And we did.

The good news is that Azam is doing well. His jaw is still slightly swollen and scarred but, otherwise, he seems to be a normal and happy little boy, going from total shyness to making monkey faces at our cameraman in about 10 minutes. We'd travel 1,500 miles to find this boy and he ends up sticking his tongue out at you. Kids!

The uncle, Khalil al-Daham, originally from Damascus, told me that during shelling in Damascus, a splinter had entered Azam's eye and his mother and father had asked him to take Azam to Germany for the eye to be treated.

I asked Khalil why he'd told us that he was the father when he was the uncle. He replied: "In Syria, a father and an uncle is the same for a child."

I wanted to know why the uncle thought it was all right to take Azam from hospital in Belgrade. He said: "I left legally. They said Azam was fine ,though he had a fractured jaw." I asked him for the name of the doctor who said it was OK for Azam to hit the road with a broken jaw and he said he didn't know.

The refugees haven't got that much money and the longer the journey, the more expensive it is. Also, if they are travelling in a group, they don't want to get split up.

Azam's uncle told us that once in Germany, Azam spent 10 days in the hospital and had been given a metal plate to help the jaw repair correctly. The Serb doctor who first treated Azam told us he should have stayed in Belgrade to be treated.

Where were Azam's parents? "We didn't tell them about his condition, we told them he was OK. ... They saw the report you did on Azam, and his condition. ... Now they're on the road."

Azam was comfortable in Khalil's company and Khalil seemed loving toward him. We've alerted the Red Cross and UNHCR to the story.

Our search was a bizarre mix of old school approaches — handing out posters, retracing the route in person, putting calls in with aid agencies, the police and hospitals — and extensive use of social media and open source digital tools.

But it was almost in vain. On Monday this week, we had all but given up hope of finding Azam. The police in Belgrade had told us they had had an unconfirmed report that he was — or at least had been — in Munich.

But it was a depressing scene as we trudged round Munich's refugee centres. They were fenced off and we weren't allowed in.

At the end of the long road from Damascus, people encounter, not poison gas and severed heads in HD, but the drizzle of the human soul.

Every color is permitted, so long as it is gray: gray skies, gray roads, gray metal fences guard their gray concrete sleeping boxes. It was here, outside one of Germany's refugee centers, that I summed up the big picture on the road for what was to be the conclusion of our report: more people, as many as 10,000 crossing any one point a day, many more children, grim conditions, grimmer than before.

So, with a heart of mud, in the gray Munich 'burb, I delivered my piece to camera: "The German Red Cross told us: 'You are not family, so according to our rules, we cannot help you.'" We tried but we hadn't found Azam.

And then we drove to the Munich airport ready to fly out. We even tweeted a little video to say our search was over and we were going home.

Then came the breakthrough from Mamdouh Akbiek — one of our colleagues at BBC Arabic's new Arabic Digital Team, which specializes in investigations. Mamdouh Akbiek is Arabic for Sherlock Holmes.

After a week of digging around and posting on our behalf in Facebook groups widely used by Syrian refugees, he'd finally found a lead.

A friend who had travelled with Azam's uncle got in touch and passed on Khalil's Facebook page. Then another friend got in touch.

At Munich airport, it was our turn to click and click again. We searched the uncle's friends and, hey presto! There was a photo of the uncle — posted just three minutes earlier — sitting on a chair, legs crossed, in a shopping center somewhere in northern Europe. Clicking some more, and there was a photo of Azam himself, jaw much better, but still visibly swollen, standing in a pool of light on a road somewhere. He was alone, but somebody must have taken the photo.

The problem was that the uncle's Facebook page gave no clue as to his name or what country he was in. But his photo did.

With a photograph, you can geo-locate with open source tools — that's techy gibberish for looking at the detail in the back of the picture, cross-checking it online with wedding videos and Google Earth and other wholly innocent filming, and work out where the photo was taken. It took our Serbian fixer, Ivan Angelovski, five minutes.

In the back of the uncle's photograph was a sports shop. There are two of that name in Germany, one in Munich, one in Berlin. In the windows of the sport shop in the photo were reflected the windows of the building opposite: portholes above square windows. The shop was in Munich. We found it and I sat in the very chair Khalil had been sitting in.

But the window display had changed. Though the photo had just been posted, it had been taken weeks ago. He'd been here about a month ago, in September.

Nevertheless, word had got through to Khalil that we were looking for Azam, and he himself posted a message to us on his Facebook page, inviting us to meet him. He was in Hamburg, only 500 miles north. We got up at six, again, and drove seven hours to Hamburg. Except when we arrived, Khalil was no longer answering his phone.

Hopelessly, we drove around the suburb where the camp was. This was low-tech, old-fashioned, gumshoe journalism and as bonkers as it sounds, it worked. We were trying to park the car when there they were, the uncle and a small boy — Azam.

He is one of thousands and thousands of young children on the refugee trail.

The United Nations refugee agency in Serbia says more than a quarter of people now passing through are under 18. And we saw ample evidence of this ourselves on our journey.

There were children soaked by the rain and cramped together in the crowds of people waiting to cross the border.

But we've just heard that Azam's mom and dad arrived in southern Germany.

There is no sign of the war in Syria ending any time soon, but in all this darkness the story of Azam, once so full of pain, now so full of fun, is a point of light.

This story was cross-posted with our partners at BBC News.