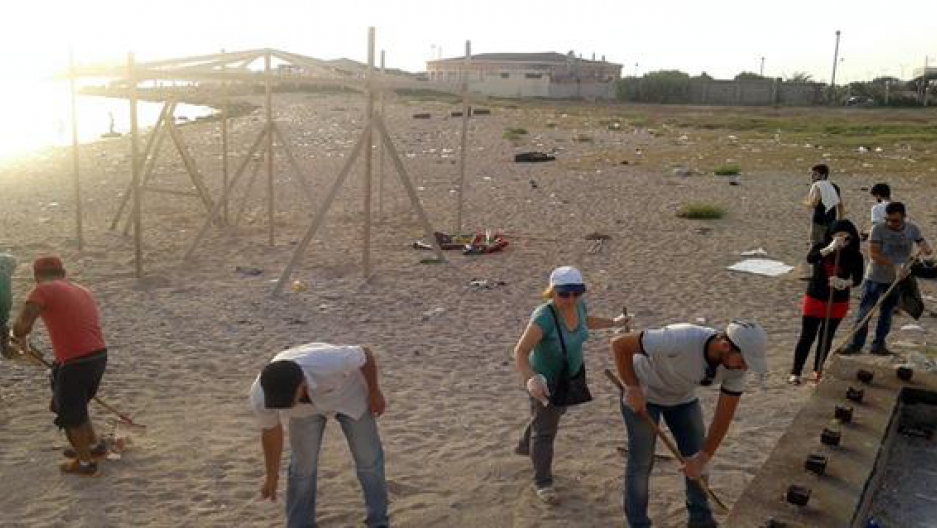 A cleaning campaign at Latakia beach in preparation for a sand sculpting forum.

By any measure, the past several months in Syria have been especially devastating.

The world has watched as thousands of Syrians fled the fighting between President Bashar al-Assad’s regime and rebel forces. Meanwhile, despite US airstrikes, ISIS seized even more territory across the country, even razing the ancient city of Palmyra.

But as Frontline's Martin Smith found when he journeyed inside government-controlled areas of Syria late this past summer, the regime and its allies were working hard to put on a good face.

One of their public relations efforts? A campaign called “Summer in Syria” promoting regime-sponsored art fairs, film festivals, and fashion shows — and urging Syrians to share their experiences of summer on Twitter using the hashtag #SummerInSyria.

The campaign didn’t go exactly as planned, as an excerpt from "Inside Assad’s Syria" reveals. The full show airs Tuesday night on PBS stations across the US.

“Just having some tea and enjoying the view from my balcony,” one person tweeted, along with a photo of a shelled-out building in the city of Homs.

“Just a few more barrel bombs, and this will all be white sand,” tweeted another, sharing a photo of a child standing in debris.

The #SummerInSyria campaign wasn’t the only surreal juxtaposition Smith saw in his three weeks on the ground in regime-held territory.

In fact, the architect of the Summer In Syria campaign itself — the government’s minister of tourism, Bishr Yazigi — invited Smith along to see another project: a newly-constructed resort, located just five miles from the bombed-out remains of Homs, and 10 miles from rebel lines.

“The animals look as stunned as I am,” Smith says, referring to the stone sculptures by the resort’s newly opened pool.

In the meantime, ordinary Syrians — some 7 million of whom have been internally displaced by the war — remain caught in the crosshairs of the crisis, hoping for security and trying to avoid the threat of death from all sides.

“I don’t have any future now in Syria,” one high school student tells Smith. “No place in Syria is safe.”

This story was first published by FRONTLINE. "Inside Assad’s Syria" premieres Tues., Oct. 27 at 10 p.m. EST on PBS stations (check local listings) and online at pbs.org/frontline.