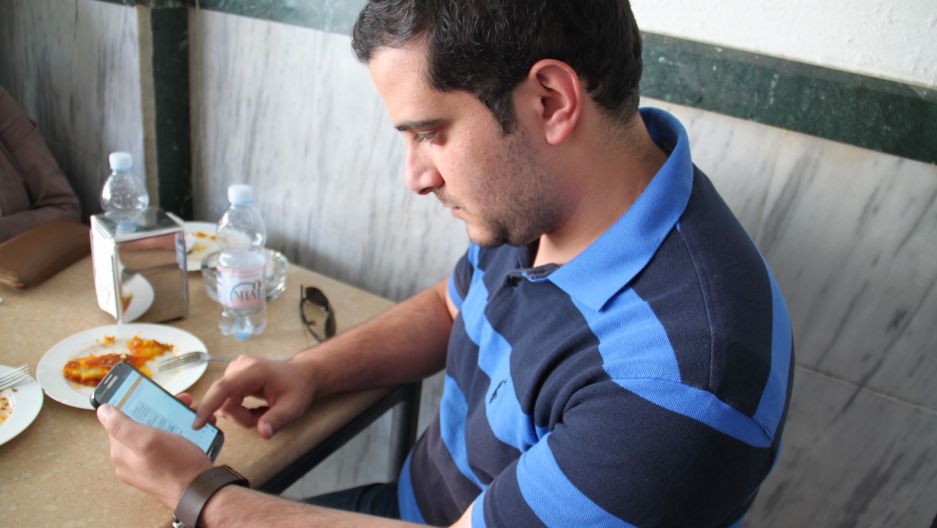 Ahmed Yousef, 25, an editor at Quds News Network, at a sweet shop in Ramallah. A photo of the Dome of the Rock, a sensitive holy site in Jerusalem, is on the wall. Tensions around the site helped spark the recent violence between Israelis and Palestinians.

There are many Palestinian newspapers, TV channels and radio stations that are reporting on the current wave of Israeli-Palestinian violence. But many young Palestinians are getting their news from Facebook pages delivering fast paced updates — and bloody, uncensored images.

There are those on both sides of the conflict who worry that these graphic images are only helping fan the flames.

One of the most popular Palestinian Facebook pages, Quds News Network, has 3.8 million followers and does what no other traditional Palestinian media organization does: It gets the news out fast.

At a sweets shop in Ramallah, the TV mounted on the ceiling was tuned to Palestine Today, a channel linked to Islamic Jihad, a Palestinian militant group. It was broadcasting breaking news footage of a protest in the West Bank.

“This piece of news had been posted on our Facebook page 15 minutes ago,” says 25-year-old Ahmed Yousef, an editor at the Quds News Network.

On the one hand, the site is an essential source of information for Palestinians, especially during days of intensified protests and clashes with Israeli forces. The news group has a devoted network of about 300 stringers, and sometimes the site even provides footage to the TV stations.

On the other hand, the site acts like no traditional media outlet. It uses hashtag phrases labeling the violence as an “intifada,” or uprising, and it provides a rapid-fire feed of bloody, graphic images.

“Our message is twofold. Number one is to support the resistance. Second, expose the aggressive acts of the Israeli occupation,” Yousef says.

The Quds News Network’s Facebook page recently shared cell-phone footage of an Israeli bystander screaming, “Die you son of a b****.” The bystander was yelling at Ahmad Manasra, a 13-year-old Palestinian boy lying contorted and bloody on the street. A car had just hit the teen. Moments before, Israeli police said, he and his cousin had stabbed two Israelis.

Palestinian President Mahmoud Abbas later said that Israel had “executed” Manasra in “cold blood,” but that wasn’t true; Manasra’s cousin was shot dead, but Manasra was alive and being treated in an Israeli hospital. Israeli Prime Minister Benjamin Netanyahu accused Abbas of lying and inciting violence with the erroneous claim.

The video was shared widely, and the very next day was one of the bloodiest.

“Israeli media say after we published the video of Ahmad Manasra, three new attacks took place the next day. This is the Israeli version ... which I refute. It is our responsibility as a website and as a Facebook page in Palestine at this particular time to publish all these videos,” Yousef says.

He adds that the site is not responsible for the bloodshed; it is simply covering the news.

Israeli officials say they have successfully petitioned Facebook to remove some Palestinian pages, but some have managed to pop up again, and they are what many young Palestinians like and share every day.

“Facebook is full of blood. Truly,” says Karzoun, a digital media activist and proponent of Palestinian engagement on social media.

He says he’s trying to stay off of Facebook these days because of recent posts like one on Quds News Network that a Facebook friend of his shared, showing a Palestinian on the ground in a pool of blood. Israeli forces shot him after they said he tried to carry out a stabbing attack.

“People, daily watching violent videos on Facebook — the day after, there is a reaction,” Karzoun says. “You watch a kid dying. What you will do? You take a knife.”