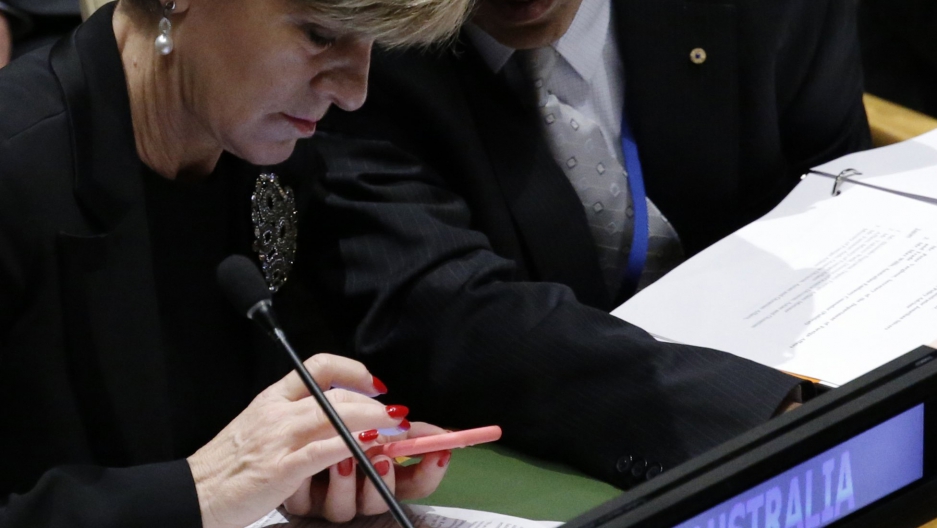 Australian Minister for Foreign Affairs Julie Bishop confers with a member of her delegation during the 70th session of the United Nations General Assembly at the UN headquarters in Manhattan, New York.

Text messages, Snapchats, social media posts and emails are now peppered with the cartoonish icons, which convey feelings and thoughts that would otherwise require several words to express. But emojis can be interpersonal minefields, too, because there are no universal rules on what the symbols mean. When it comes to emoji communication, there's plenty of room for messages to get lost in translation.

That's why emojis are proving an awkward language for politics, where communication and messaging are paramount.

Look what happened when Democratic presidential candidate Hillary Clinton’s social media team reached out to followers on Twitter and other social media sites asking them to express in “3 emojis or less” how their student debt makes them feel.

.@HillaryClinton You know what people who went to college can use? Words.

.@HillaryClinton is there a "condescended to" emoji

For Clinton's team, the emoji episode was more embarrassing than anything else. A gambit to seem hip made her seem out-of-touch with young Americans struggling with student debt and a challenging job market.

But could the wrong emoji in a tweet by a powerful official actually be dangerous, geopolitically speaking?

That concern might explain why Australian senators were so keen this week to understand the “diplomatic message” contained in the grumpy red face used by Foreign Minister Julie Bishop — an avid emoji user — to describe Russian President Vladimir Putin in an online interview earlier this year in which Bishop answered questions with emojis.

“Is it intended to suggest that the foreign minister is angry at President Putin?” Labor Senator Penny Wong asked foreign ministry officials appearing before a Senate committee hearing on Thursday.

Bishop later tweeted this response — and in doing so possibly triggered another hearing to work out the meaning of her latest emojis.

Is that Wong blushing because she's embarrassed? And does the smiley face with sunglasses suggest Bishop is cool and Labor isn't? We're confused.

While Putin hasn’t publicly responded to Bishop’s emoji characterization of him as an angry red-faced man, Bishop assured reporters he would be “delighted.” (At least she didn't use one of several available gay emojis. He might not be quite so happy then.)

It's not just politicians and officials punctuating their political messages with emojis. They've been popping up in the media's political coverage as well.

Earlier this year the Washington Post unveiled a set of political emojis for the White House Correspondents Dinner.

And while the debate about whether emojis have or will become a language of their own is still raging, the Guardian managed to live tweet US President Barack Obama’s State of the Union speech earlier this year using mostly emojis.

that with touching ; that unfolded with a long and ; that a spread across and the .

, for all that ’ve endured; for all the grit and required come

Perhaps it's easier — and safer — if politicians and political reporters stick to words.