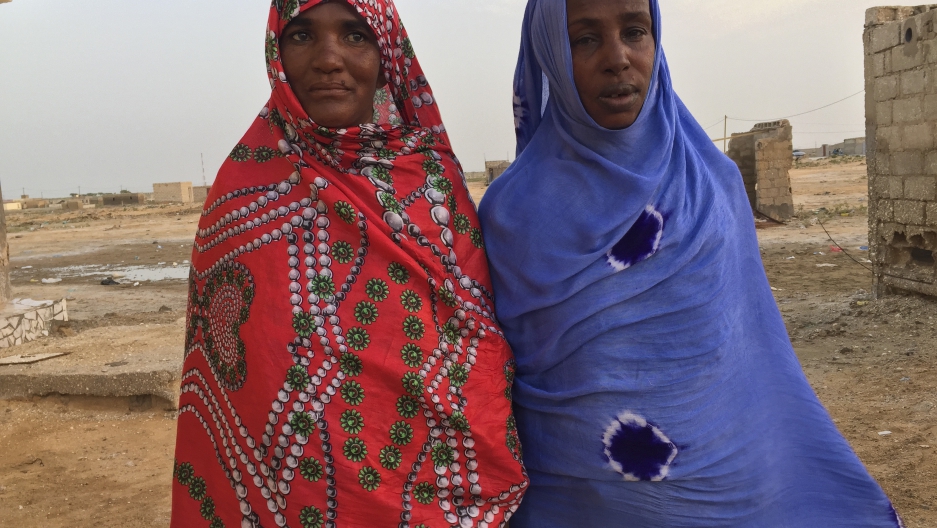 Habi Mint Rabah, left, and friend Hane Mint Salem are both former slaves, freed with help from anti-slavery activists. "Liberty is the most important thing," says Rabah. "Even if I don’t eat, I am still free."
Credit: Erin Conway-Smith
Share

NOUAKCHOTT, Mauritania — It was a modest plan, a small but significant step in Mauritania’s achingly slow fight against slavery.

In a caravan of four cars and two minibuses, tricked out with loudspeakers and banners, the activists and musicians would travel between towns and educate rural Mauritanians about the centuries-old problem of slavery.

“No to slavery,” read one of the banners. Another sought to raise awareness of land rights for people of slave descent: “My land is my life.”

But the authorities thought otherwise. Near the southern town of Rosso, police arrested many of the activists, including Mauritania’s most prominent campaigner, Biram Dah Abeid, a former presidential candidate. Back in the capital, Nouakchott, police padlocked the group’s headquarters and confiscated the contents.

A year later, Abeid and the vice president of his group, the Initiative for the Resurgence of the Abolitionist Movement (IRA), are still in prison. In August they lost appeals of their two-year sentences for charges that include belonging to an unrecognized organization and taking part in an unauthorized assembly. Abeid's health is said to be deteriorating.

More from this series: 'Slaves by the will of God': Why Mauritania has the highest percentage of slaves in the world

IRA’s headquarters has remained shuttered since November 2014. The police painted black lines across the front of the building, warning away visitors who might have once come for help in freeing a slave.

Balla Touré, a spokesman for IRA, sighs as he points out the building. “Now people don’t know how to reach us,” he says.

In Mauritania, a sparsely populated and highly stratified country on the northwestern edge of Africa, a traditional form of slavery has persisted for centuries. Hundreds of thousands of people, or at least 4 percent of the population, are still enslaved. Mauritanian police shut the offices of the anti-slavery group IRA, and painted angry black stripes on the walls.

Many observers question the government’s willingness to tackle the problem, pointing to the harassment of anti-slavery campaigners and the shutting down of the educational caravan. At the time, Mauritanian authorities accused Abeid and the other activists of spreading “racist propaganda.”

While a new law increases sentences for convicted slave owners to 20 years in prison, and criminalizes other forms of slavery such as forced marriage, it is very rare that anyone is found guilty.

Frustration over the slow pace of change has compelled activists to turn to more radical tactics, such as attacking interpretations of Islam by Mauritanian religious authorities that justify enslavement and perpetuate old beliefs.

At a rally in 2012, Abeid burned religious texts that upheld slavery and the brutal treatment of slaves. He was arrested amid a storm of demonstrations, with even the president, Mohamed Ould Abdel Aziz, calling for him to be judged under shariah law and killed as an apostate.

Touré says the outcry faded away after IRA found an imam who was a White Moor — the minority elite in Mauritania — willing to issue a decree in their defense.

“That’s why Biram [Abeid] burned the book by those authorities — as a symbol," Touré says. “Before that moment we had been criticizing but had no effect. No one was listening."

"At that moment the leaders knew we were dangerous.”

One senior government official, considered more progressive on the issue, says that while he is against the imprisonment of IRA members, he thinks the group's tactics are problematic and Abeid “is divisive.”

The majority of slave owners in Mauritania — but not all — are of the lighter-skinned Arab-Berber minority known as White Moors, while slaves tend to be black. The country is also home to "Afro-Mauritanians," such as the Fulani, Wolof and Soninke ethnic groups, who were never enslaved but are still subject to racism.

The official, who would only speak on background, instead supports affirmative action programs that empower the descendants of slaves. He wants Abeid to work together with government institutions. Anti-slavery campaigner Birame Ould Abeid, center, and six members of his Initiative for the Resurgence of the Abolitionist Movement in Mauritania, speaks after being freed in Nouakchott on Sept. 3, 2012. Abeid was jailed again last year for a protest against slavery.

In 2013, Mauritania's government created the (deep breath) National Solidarity Agency for the Fight Against the Vestiges of Slavery, for Integration, and for the Fight Against Poverty. But the clue here is in the name: The agency addresses the consequences of slavery, such as poverty and inequality, while not admitting to the extent of the existing problem.

Alioune Tine, regional director for Amnesty International, says there is some political will at the government's higher levels to fight slavery. But law implementation is a major problem, with individual police officers and judges refusing to prosecute slave owners and harassing activists.

“They want to progress but, excuse me, it is a very archaic society, and very polarized,” he says. “The problem is how to eradicate the culture underpinning slavery.”

Tine thinks the Mauritanian government would like to see Abeid freed, given the international pressure from rights groups and governments including the United States.

“Biram is an embarrassment for the government,” says Tine, who visited Abeid in prison in August. “They want to release him. But the judicial system is a problem.”

Amnesty International, in an assessment of human rights in Mauritania ahead of a United Nations periodic review next month, notes that cases are not processed in timely fashion: “In 2014, at least 15 cases of alleged slavery were brought before the courts; however, these cases are still under investigation.”

In 2007, when Bilal Ould Rabah needed assistance in rescuing his sister, Habi, from slavery, he went to see Abeid. Rabah says the police had refused to help.

The siblings were born into slavery; their mother had been kidnapped by slave traders from neighboring Mali and her children distributed into different families, so they didn’t grow up together.

Bilal, a herdsman for his master, managed to escape when he was around 19 years old — and then went back to fetch his mother, who was ill. Two other siblings were rescued with the help of activists, and then it was Habi’s turn.

Her rescue, by Bilal, Abeid and other activists, was captured on video by a Franco-German documentary crew. At first she refused to leave. Bilal Ould Rabah and sister Habi Mint Rabah. He rescued her from slavery with help from the abolitionist group IRA. They now live in Arafat, a poor suburb of Nouakchott, Mauritania.

Habi Mint Rabah, who is 42, says that as a slave she hauled water, did the cooking, and sometimes slept next to the goats on the sand. She was beaten and raped by her master, who wouldn’t let her pray because she was only there to work.

Once, when she asked her master to teach her, he said she isn’t deigned to pray, suggesting that her soul was inferior because she was a slave.

Today, Habi sells grocery items — sugar, tea, tomatoes, carrots — from a small stall, which she set up with NGO funding. Her 10-year-old son goes to school.

“I am very well,” she says, smiling. “Liberty is the most important thing. Even if I don’t eat, I am still free. It means everything. I’m like another person now.”

But, typical of such cases, Habi's slave owner was never prosecuted.

Touré says that since the previous law against slave owners wasn't applied, his is doubtful that the situation will change under the new one, which doubles sentences.

“The new law will make no difference to our struggle,” he says. “All of the top leaders officially say, in front of the cameras, that slavery doesn’t exist in Mauritania. So there’s a problem when they are making laws for something that doesn’t exist.”

But Touré, who has criss-crossed Mauritania as a development consultant, says his activism was formed by seeing how slaves and former slaves — known here as “Haratins” — were living, often in remote desert oases.

“They are seen as objects, as animals,” he says. “I thought they deserved better than that.”

“Sometimes, when I talk about certain cases, I use all my will not to cry in front of people,” he adds. “The words are not enough to describe the situation and how I feel.”