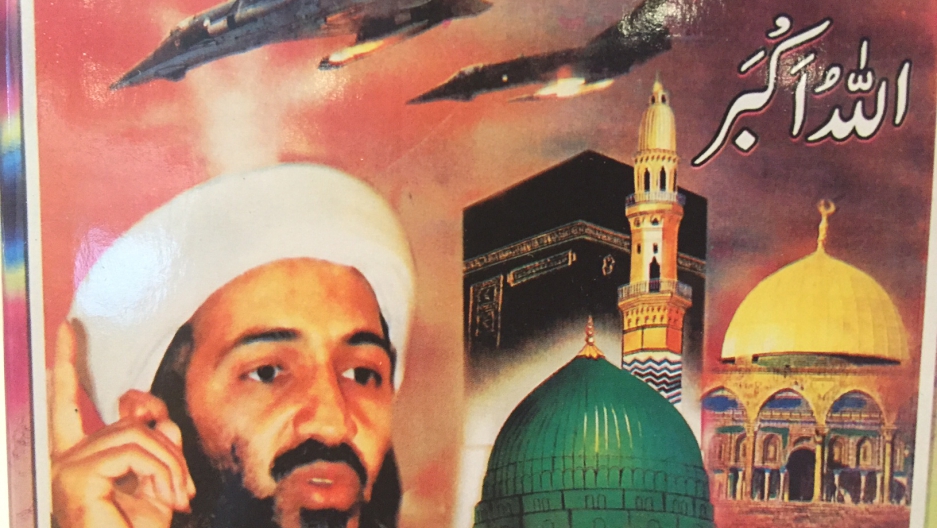 An illustration of Osama bin Laden appears on the cover on the new book, "The Audacious Ascetic: What The Bin Laden Tapes Reveal About Al-Qa'ida."

Back in 2002, with the war in Afghanistan still in its early stages, Osama bin Laden went into hiding. The al-Qaeda leader fled his home in Kandahar — leaving some of his possessions behind. The home was ransacked — and then abandoned.

Incredibly, more than 1,500 audiotapes — cassettes actually — were still inside.

"They were found by a local Afghan family in one of the rooms. They were untouched," says Flagg Miller, author of the new book, "The Audacious Ascetic: What The Bin Laden Tapes Reveal About Al-Qa'ida." "The family collected the tapes and offered them to a cousin who ran a pop-song shop. And they were going to be used as blanks because that was the value of these tapes for the family."

Yes. They were going to bulk-erase the tapes and fill them with pop music. But then a CNN stringer heard about it, took a cab to the studio, and put a stop to it. "CNN got a hold of them and they offered them to the FBI and CIA to review," he says. "Apparently, the agencies declined, saying the tapes were mostly of historic value only and not about iminent security threats."

Eventually, the tapes landed in Miller's hands. He's a religious studies professor at UC Davis and a specialist in Arabic. He started listening to the tapes in 2003. Miller is the only person to listen to the entire archive.

This is where it gets interesting. The recordings include the infamous "Declaration of War against the United States" speech bin Laden gave in 1996. But the full speech gives you a different view of it. In the speech, Bin Laden reads the following poem:

By what volition, O ʿAmru Ibn Hind
Do you want the land to be so pliant?

By what volition, O ʿAmru Ibn Hind
Do you subject us to betrayal and slight us?

In truth, O ʿAmru, our spear vitiated
The enemies even before your pliancy

"The bulk of this speech," he says, "is actually an invective against Arab rulers themselves. So the larger story of how the United States and the West found a message that was about taking on the US is a story that remains to be told."

What does get told are rather mundane moments. One includes bin Laden complaining about his brother's purchase of 5,000 cases of Tabasco sauce. The archive also includes music from an Algerian Jew named Enrico Macias. It's not something you'd think an al-Qaeda operative would be into, but Miller says it reveals a lot about the organization.

"The fact is, many Al Qaeda members had come into military from lifestyles that were completely opposite," he says. "This specific tape is a complicated one because it features this French singer, but it also has got a Koranic supplication. It's a hodgepodge that I think reflects the ways in which Al Qaeda was not a coherent ideology."