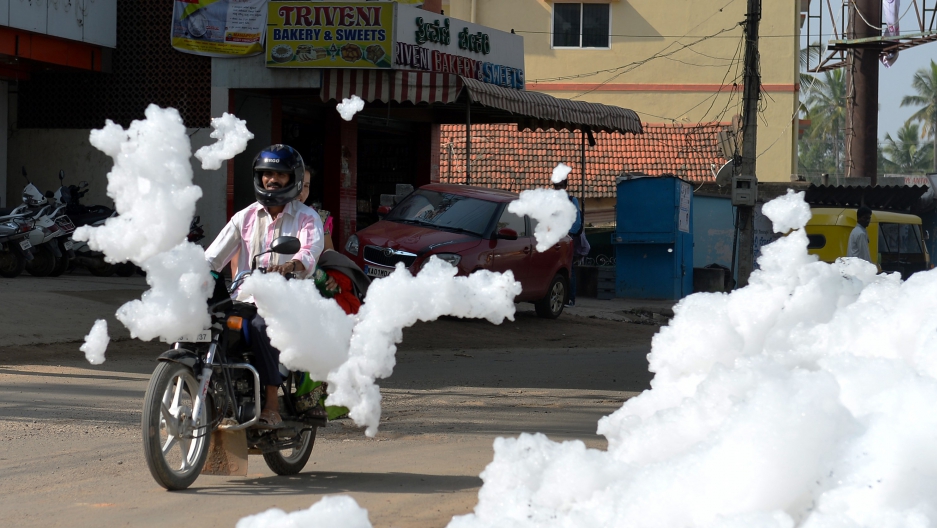 Toxic foam is a reality of life during the rainy season in parts of Bangalore, in eastern India. The foam froths up when rains churn up lakes laced with millions of gallons of residential and industrial pollutants, including phosphate laundry detergents banned in other countries.

The Indian city of Bangalore is known not only as the IT hub of India but also the City of Lakes. But recently, residents were shocked when one of those lakes caught fire.

Over the last year the surface of two city lakes, Vathura and Bellandur, has become covered in froth. When it rains, white foam runs through streets as if a giant washing machine had exploded in the city.

Scientists from the Energy and Wetlands Research Group at the Indian Institute of Science studied the phenomenon in May after the toxic froth on Bellandur lake spontaneously caught fire. They found that the sludge is not only industrial and household sewage, but also clothes washing detergent that includes phosphates — chemicals that have been banned in many countries but are still in use in India. The researchers estimate that more than 100 million gallons of these pollutants are discharged into the city's lakes every day.

When it rains, the toxic soup gets churned up and produces froth like a washing machine. Researchers suspect the fire was due to methane building up within the foam.

When the foam builds up, local residents complain of burning, itchy eyes, and illness. Activists say birds and animals no longer visit the lake and the pollution has been seeping into the city’s water table. Santosh H. S. of the citizen activist group Whitefield Rising says that Bellandur Lake has also largely been filled up with sludge, and that its depth has shrunk from 19 feet to just 2 feet.

They should rename Bangalore's Bellandur Lake to 'Detergent Lake'.

T. V. Ramachandra, who led the Institute of Science study, says the problem stems from unplanned urbanization and unchecked dumping, along with underperforming sewage treatment infrastructure.

Santosh H. S. of Whitefield Rising, a citizen activist group, says that Bellandur Lake used to be 19-feet deep at the centre, but with the addition of sludge, it’s deepest point is only 2 feet. Citizens, especially those who live around the lakes complain of burning, itchy eyes, and illness. Birds and animals no longer visited the lake and, he said, and because the lakes are interconnected, the pollution seeped into the city’s water table.

T. V. Ramachandra who led the study says the problem stems from unplanned urbanization and unchecked dumping, along with underperforming sewage treatment infrastructure

His report was submitted to the government in June, but he says "(since) the latest episode of the frothing, the government was sitting on" the report.

Still, Ramachandra is optimistic that the lakes will ultimately be cleaned up. Citizen groups are meeting government officials and a court directive has led to the state government setting up a Lake Conservation Authority.

“Once they have the authority to remove encroachers and penalize water polluters, I’m sure it will make a difference,” Ramachandra said.

But other residents are less optimistic. One says it's already too late. Another says he feel like the city is sitting on a volcano.

@chhavi @jackerhack @f3ew I feel like I'm in a Tarkovsky dystopian future whenever I pass by. A toxic river and no sense of hope for change.