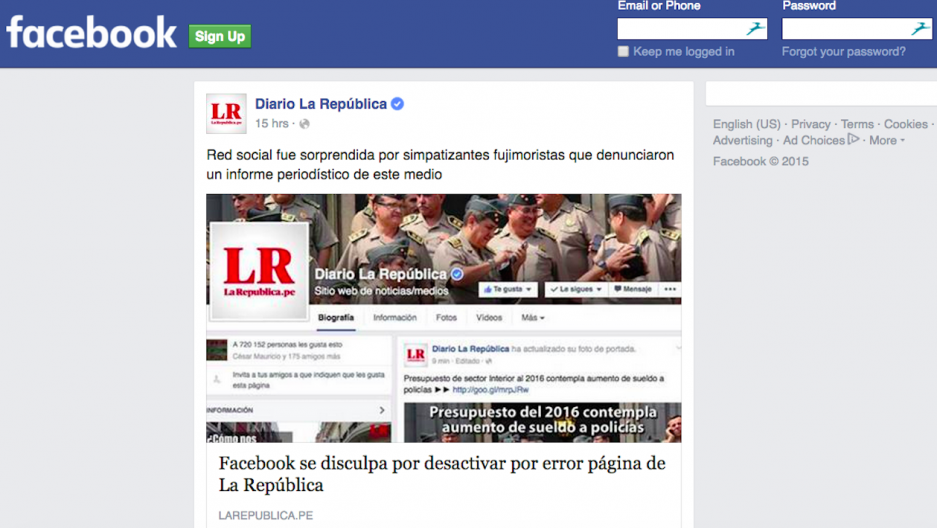 LIMA, Peru — Facebook is at the center of a “censorship” firestorm in Peru after suspending the account of one of the country’s most important newspapers.

The temporary suspension came in response to online complaints that La Republica's investigation into the alleged criminal past of relatives of the country’s leading presidential candidate had violated Facebook’s user guidelines.

In that report, published on Sunday, La Republica alleged that two uncles and one aunt of Keiko Fujimori — who has a consistent lead of around 20 points in the polls ahead of April presidential elections — remain wanted on charges of “illicit enrichment” and “conspiracy to commit crime.”

The three have been on the run since 2000 when their brother, hard-right President Alberto Fujimori, was forced to resign in ignominy. He is now serving a 25-year jail term for embezzlement and directing death squads.

La Republica’s Facebook account was down for 16 hours on Monday before being reinstated. That brought withering criticism of both Facebook and the "Fujimorista" political group for silencing legitimate journalism.

“I believe Facebook, knowing that this was a media outlet, has made a mistake," said Jose Ugaz, the Peruvian lawyer who heads anti-corruption group Transparency International. "It is striking that [Facebook] has acted so casually.”

It's just the latest international case of alleged censorship by Facebook, which internet activists accuse of lacking transparency over what content it takes down and why.

According to La Republica, Facebook later apologized "for the inconvenience" in a statement to the newspaper, saying it had shut the page down "by mistake." Peruvian presidential candidate Keiko Fujimori during a prior campaign in 2011.

The Mohme Foundation, run by the family that owns La Republica, warned of an orchestrated campaign by Fujimorista trolls to silence criticism.

“It frequently happens that organized online communities program ‘attacks’ of this nature against adversaries or rivals,” it said in a statement.

And according to the Lima-based Press and Society Institute, or IPYS, La Republica had explained to Facebook that its investigation was serious journalism before the network suspended its account. In a statement sent to GlobalPost, IPYS accused Facebook of a lack of “diligence.”

The controversy comes just as Keiko Fujimori has been attempting to distance herself from the excesses of her father’s 1990s authoritarian government — which oversaw the disappearance of $6 billion from public coffers and the harassment of critical journalists.

In a speech at Harvard earlier this month, she made important acknowledgments for the first time, including that there had been forced sterilizations of poor women during Alberto Fujimori's rule.

In a statement, her party Fuerza Popular (Popular Force) “categorically” rejected the claims that it was behind the suspension as well as the original La Republica investigation.

“We reiterate our absolute respect for the freedom of expression,” it added. Facebook did not respond to GlobalPost’s request for comment.