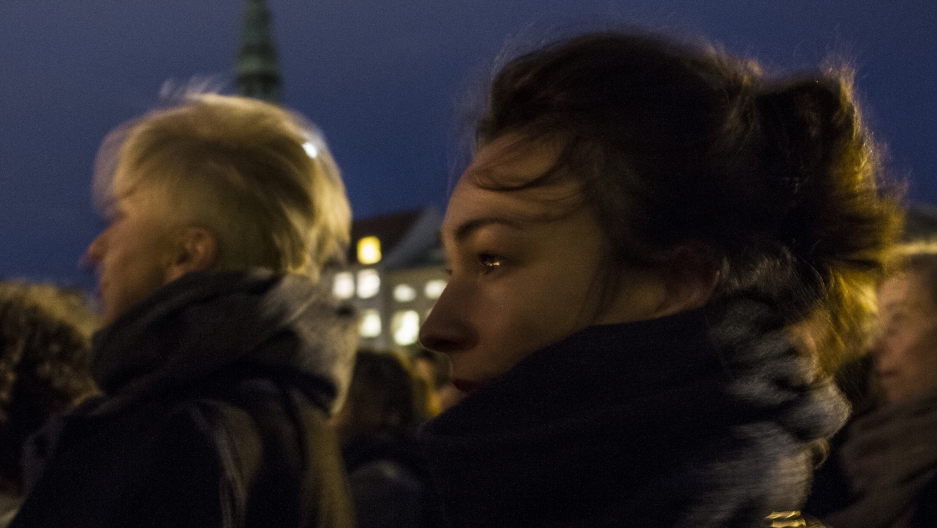 Sanja Golubovic (r) and her friend Branka Saric (l) at a rally demanding the Danish government accept more refugees and migrants. Both came to Denmark as refugees from Bosnia.

On a cold night in Copenhagen, a few thousand people gather downtown, preparing for a silent march on the Danish parliament. A handful of protestors light candles, some carry signs reading “No Borders”; others follow the crowd on bicycles as they wind their way through the city’s windy streets.

Among them is Sanja Golubovic, surrounded by a crew of friends who have come out tonight to protest the Danish government’s recent tightening of asylum requirements for refugees. For Golubovic, this issue is personal. More than two decades ago, she came here as a refugee.

“A lot of Danes think I have a really exotic name. They’re like, how do you pronounce it — SAN-jah?” she says, laughing. “It’s just like Tanya, but with an S!”

Sanja’s family are Bosnian Serbs, and they fled the war there in the 1990s. Now she’s watching, horrified as her adoptive government balks at the most recent wave of people seeking shelter.

As refugees and migrants from the Middle East, Africa and beyond continue to pour into Europe in search of safety, stability and work, thousands have made their way to Denmark. Many hope to move on to Sweden, but some are also looking to stay. In response to the unfolding humanitarian crisis, Denmark is tightening the country’s requirements for declaring asylum, requiring applicants to gain higher levels of Danish language proficiency and be financially independent for longer periods of time.

Golubovic says she felt compelled to help as soon as she began to see migrant and refugee families walking through Denmark, along the highways. At first she and her friends organized aid donations; then when the government shut down bus and train service for refugees and migrants, they ducked police to give people rides into town from the German border.

Now, she’s started going to rallies for the refugees, like the one this night, hoping the show of popular support will change her government’s mind. Looking out at the crowd of people, Branka Saric, also a Bosnian Serb, shakes her head: “I have a little bit of that emotion from 23 years ago,” she says, referring to her family’s journey as refugees, “when we came to Scandinavia.”

Golubovic says she too has been thinking a lot of her own journey over the past few weeks.

“I was 6 years when there was civil war in the former Yugoslavia,” she says, dressed for the cold in an oversized scarf layered over a leather jacket and dark skinny jeans. “It’s different when you’re a child. I just remember playing with kids in the asylum center, but I remember my parents being very worried.

“Even though we escaped, thinking about the family still in Bosnia was really tough,” she says. “And it was tough coming to a country where you don’t understand or speak the language.

It took Golubovic years to feel “normal,” as she describes it. Even now, when she speaks Danish fluently and her boyfriend is Danish, she doesn’t feel like she completely belongs.

“It has been difficult to feel non-Danish and when I go back to my former country in Bosnia I don’t feel Bosnian,” she says. “It’s kind of frustrating, especially when you’re growing up and ... you have to figure out your identity. But now that I’ve grown older I don’t feel like I have to be in a box [of] either Danish or Bosnian.”

Golubovic smiles, saying that in a way, her mixed identity allows her to feel at home anywhere.

Still, she says she’ll always be grateful to the Danish government for giving her family shelter and stability. What she wants now is for the government to extend the same hand to people who are in need this time around.

“It has been embarrassing to watch the Danish politics lately and embarrassing how Denmark is considered as [one of] those that really doesn’t want refugees.” She says watching the recent John Oliver segment on the migrant and refugee crisis, where he ridiculed Denmark for its policies, was painful.

But despite the rallies and aid donations and hundreds of volunteers who have overwhelmed nearby registration centers, Golubovic admits she hasn’t seen any actual political change yet.

“Some people say, oh they’re opening up to allow more refugees to Denmark, but ... I feel like it’s just trying to make it seem like they’ve done something. I don’t feel like we’ve achieved anything.”

Turning her head and flashing a smile, she adds: “I’m still hopeful.”