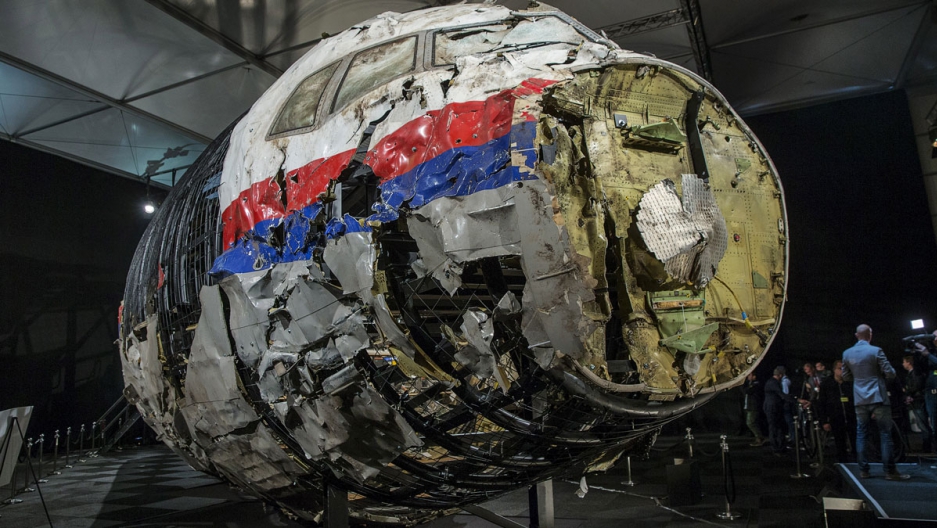 The reconstructed wreckage of the MH17 airplane is seen after the presentation of the final report into the crash.

The Russian state manufacturer of the missile system believed to be behind the downing of Malaysia Airlines flight 17 over eastern Ukraine last year says its own investigation into the crash contradicts findings from a Dutch probe into the tragedy.

Speaking at a press conference in Moscow, Almaz-Antey's CEO Yan Novnikov said evidence showed the plane was indeed hit by one of its Buk missile systems, as Western nations have alleged, but that the weapon was an older Soviet model no longer used by the Russian military.

Novnikov also said his company's analysis also indicated the rocket was fired from territory under Ukrainian government control at the time of the crash.

"Today we can say for sure that the Malaysian Boeing was shot down by a Buk missile 9M38 from direction Zaroshenskoye," said Novnikov, referring to an area Russia says was held by Ukrainian forces.

The Almaz-Antey presentation came just hours before the Dutch Safety Board report issued its own long-anticipated report on the downing of flight 17.

Alexander Golts, a defense analyst in Moscow, says the timing of the Russian presentation spoke volumes.

"This Moscow presentation appeared only because this report appeared in Holland," says Golts. "It's no doubt that the main point was to spoil the results. We all knew the conclusions of the Moscow report months ago."

While the Dutch investigation does not — for now — seek to assess blame over the incident, Russia has chafed at evidence the Russian-made rocket was fired from rebel-held territory.

Still more incidiary have been suggestions of direct Russian culpability — with Russia's military perhaps even providing the Buk weapon itself.

The US, the government in Kiev, and other allies have repeatedly accused Russia of having its military forces fighting alongside rebels — a charge Moscow denies. Moscow insists Russian fighters in Ukraine are merely volunteers and have provided various explanations for the crash — all laying blame with the authorities in Kiev.

Fyodor Krasheninnikov, a political analyst based in Ekaterinburg, says much like Soviet authorities' long refusal to take responsibilty for the Katyn massacre of Polish soldiers during World War II, the Kremlin is unlikley to admit to any culpability in the downing of flight 17 anytime soon.

"They will deny it until the end. To do otherwise would be admit to Russians they'd been lying to them all along," says Krasheninnikov.

Over past months, Kremlin officials and state media have repeatedly suggested the Dutch investigation is biased. Almaz-Antey officials underscored that message again Tuesday.

Almaz-Antey CEO Yan Novikov noted that they had submitted their findings to the Dutch Safety Board only to have their data ignored. The Russian insisted their data was open to scrutiny.

But Bert Lanting, a journalist with the Dutch newspaper de Volkskrant, questioned how independent the Almaz-Antey report could be, given company officials current faced Western sanctions over the incident and hadn't included outside expertise in its report.

"Wouldn't people say it's like a butcher testing the quality of his own meat?" asked the Dutchman.

The Russians countered they were uniquely qualified to analyze the Buk system and presented conclusions that centered on two primary points: Firstly, the 'butterfly-shaped' shards and puncture marks found on MH17, they argue, match those of older Buk 9M38 Soviet-era missiles since decomissioned by the Russian military.

Secondly, they say the point of impact and shrapnel patterns on the plane's front cockpit and left wing suggested the missile had been fired from territory in control of the Ukrainian army.

To make their case, Almaz-Antey officials unveiled a dizzying array of charts, tables and graphs.

They also showed a series of video recreations of the moment of impact — with part of an Ilyushin-86 airliner serving as a stunt double for the Boeing 777.

The video screenings of blasts peppering the plane's cockpit — at increasingly slower speeds and various angles — were intended to buffer the Russian case, but seemed to only emphasize the carnage involved.

Still, Goltz, the defense anlysist, said he found it "absolutely amazing" today's Russian report chose to go beyond the bounds of the Dutch report and lay blame for the crash with Ukraine.

Golts says it showed "authorities are nervous Russians will begin to think Moscow is connected somehow with this terrible crime."