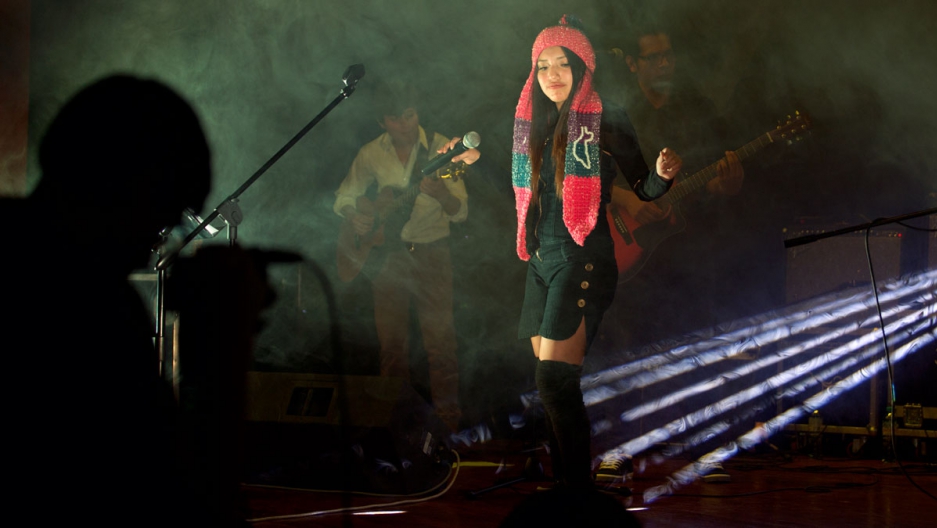 Fourteen-year-old Renata Flores at her first concert held in September 2015, in Ayacucho, Peru. The majority of popular cover songs she sang that night were in Quechua.

Fourteen-year-old Renata Flores is having an Internet moment. The indigenous Peruvian girl recently belted out a Michael Jackson song that went viral. But her ability to sing wasn't the only draw behind the video's popularity. Flores also gained praise because of how she sang MJ's lyrics — entirely in her native tongue: Quechua.

The ancient dialect has long-suffered a social stigma in Peru, where speaking it has been seen as uncool. Quechua is one of 47 surviving indigenous languages in Peru. It's also one of the country's oldest dialects, descended from the Inca more than 800 years ago.

Next to Spanish, Quechua is Peru's second-most spoken language, with an estimated 4.5 million speakers. But it's not taught in schools. And those fluent in it are mostly older people of the rural Andes whose sons and daughters have grown up largely rejecting Quechua.

"I think that's what they think, Quechua equals poverty, and they don't put value into it. But that's not right,” says Flores, who’s only now beginning to learn Quechua.

Back in August, Renata struck a chord after posting a music video on YouTube. It seems a lot of people around the world could relate to a girl going back to her roots. She sang in Quechua to Michael Jackson's "The Way You Make Me Feel,” set against the backdrop of ancient Inca ruins. The video has since been viewed more than a million times — and you can see why.

At school, Renata's basically a celebrity. In her home city of Ayacucho, in the Peruvian Andes, a group of elementary students showered her with colorful confetti and white roses. Others held signs that read things like "Renata, you make us proud."

Renata's teacher, Ruddier Rojas, says a lot of the kids want to be like her. Her singing has even led Rojas to rethink his own indigenous identity.

"I'm going to be honest,” says Rojas. “When I went to the capital city I was ashamed there about my parents speaking Quechua. I would say no, I denied it. And now I'm embarrassed because I don't speak Quechua, the origin of my family and the door to my past.”

Peruvians have struggled for years to accept their indigenous heritage. Ethnic discrimination in the country has gotten so bad that the Ministry of Culture launched a racism hotline in 2013.

Renata's mother, Patricia feared for the worst for her daughter. But even so, she's been behind the Quechua campaign from the very beginning. Just last month, she and a network of family and friends threw Renata her first concert at a theater in Ayacucho. It was put together in just three weeks — amidst all that social media buzz.

The show stopper was Renata's performance of "Fallin" by Alicia Keys, sung in both English and Quechua. But there was something else that stood out on stage that night: Renata's pink and purple wool hat, known as a chullo, with dangling earflaps that hung down to her waist. It's a style of hat that indigenous Andeans have been wearing for centuries.

"Yeah, it's part of adding value to our culture from the Andes — Andinos,” said Renata. “I wanted a symbol for me, that identifies me."

It's a symbol of both indigenous pride and awareness — starting with a new generation in Peru.

This story is funded in part by the Ford Foundation through a grant administered by the International Center for Journalists.