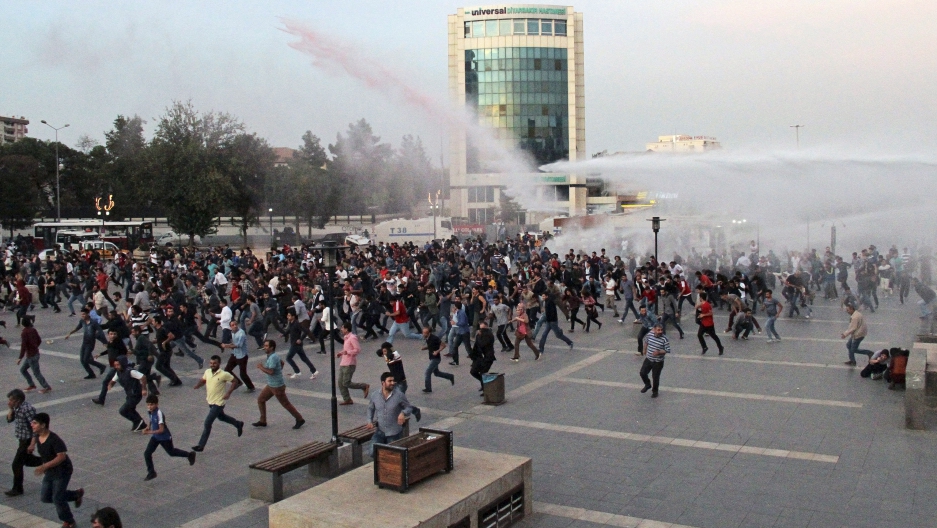 Police in Diyarbakir, Turkey, on October 11, 2015 use tear gas and water cannon to disperse people marching to protest the double suicide bombing in Ankara that killed up to 128 people.

You've may have seen the video from this weekend in Turkey. One second, people are dancing at a peace rally. The next, they're cowering in fear as a giant ball of flames erupts behind them.

And that was just the first explosion.

Erdoğan, who called national elections for Nov. 1, has declared that "these attacks will not turn Turkey into a Syria."

Still, the Syrian conflict has its way of leaking across borders.

According to the BBC’s Mark Lowen, hospitals are still flooded with injured survivors and morgues have only begun the process of identifying the dead.

The force of the blasts has made normal identification impossible in some cases, so the authorities are depending on forensic science to distinguish the victims. Funerals have also been held for some who died. Lowen spoke to one relative who was overcome with grief. “When he did [speak], he simply said: I wish I was dead too. To be alive and witness this is too terrible."

Across Ankara, there is a sense of anger and national mourning, along with hostility — directed toward Erdoğan's government. Strikes and defiant peace marches have been held.

In spite of the government identifying ISIS as the perpetrators, many opposition supporters blame their own leaders. According to Lowen, marchers in Ankara chanted the slogan "Erdoğan — Thief! Murderer!" For Lowen, this reflects the depth of the tragedy. “Turkey has been profoundly shaken by this. It’s an event that will be seared into the consciousness of Turkey for decades to come.”

But the fallout from this bombing extends well beyond Ankara.

Residents in the southeastern city of Diyarbakir, a place that many Turkish Kurds call home, are taking the attack especially hard.

"A prominent political candidate from a pro-Kurdish party and an elderly peace activist both were killed in the bombing," says reporter Jacob Resneck.

He says people in the city are tense. Fighting between the government and the Kurdish militia known as the PKK has been going on for months. And while the PKK ordered a ceasefire to allow people to mourn the deaths from the bombing, Turkish forces have not let up.

"As people were mourning their dead, F-16s were flying overhead," he says.

Resneck says the only thing people want in the area is peace. And right now, that's not happening.

And while Turkey may be condemning ISIS now, Turkey's relationship with the militant group has been complicated.

Turkey has long backed rebel groups in Syria trying to overthrow the regime of Bashar al-Assad. And so it turned a blind eye to smugglers bringing in men, arms and money.

When ISIS emerged as a player in Syria in early 2013, it quickly cornered a lot of those things, especially the men coming to fight.

Despite ISIS’s militant rhetoric and warnings from the United States and others, Turkey continued to turn a blind eye. Border controls remained lax.

“The policy,” says Aymenn al-Tamimi, “was that really anyone could cross [into Syria], provided they could prove they were in Turkey legally.” Tamimi is a specialist in Islamic militant groups, and a fellow for the Middle East Forum.

“That’s how I crossed into northern Syria in December 2014,” he adds. “I just went straight up to the official border crossing, and showed them my passport and my Turkish visa, and then it really wasn’t much of a problem at all to cross.”

“So if that was the official border crossings, you can see, I think, how lax security was.”

In addition to being anti-Assad, Turkey liked the fact that ISIS attacked Kurdish factions, too. Turkey has its own restive Kurdish community, which has strong links with Kurds in Syria and Iraq. And until recently, ISIS made an effort not to threaten Turkey directly.

There is concern and anger in Turkey that the government “has sown the seeds of this problem,” Tamimi says.