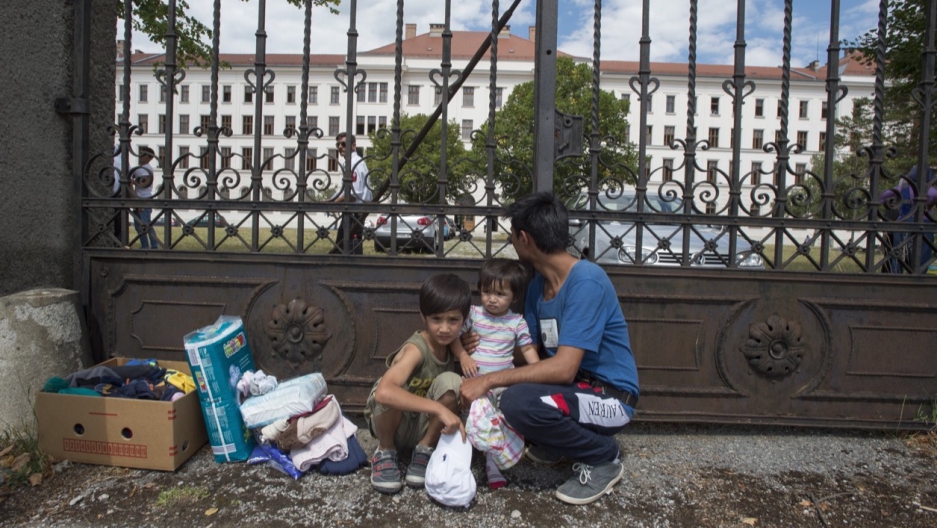 In a country proud of a strong social security system that guarantees no one lives in squalor, the Traiskirchen camp is an eyesore, proving that some are, indeed, more equal than others.

At its peak in recent months, more than 4,600 migrants lived here, in conditions described as inhumane. Occupying a former military school, the camp was meant to house only 1,800.

The overcrowding meant that 2,200 women, children and men were forced to sleep in the open, weathering rainstorms and heat waves without mattresses, blankets, or any kind of shelter. Hygiene conditions were horrendous. Food, too, was short, refugees said.

The United Nations refugee agency judged it “beneath human dignity.” Austria's own interior minister described the conditions as “precarious.” The ministry's general coordinator for Traiskirchen, Walter Ruscher, told GlobalPost that the situation was “unbearable.”

Austria, like other European Union countries, was simply overwhelmed with the influx of refugees over the summer, he said. This year more than 600,000 people have sought asylum in the EU, according to Eurostat. Syrians fleeing war make up the largest group. Many people were sleeping outdoors when the camp's population peaked beyond capacity this summer.

A cue from privatized US prisons

“I have the strong apprehension that the ministry is taking the American model as an example, and that's not my wish because we all know the negative examples of all the things that are happening in American prisons,” Alev Korun, a lawmaker for the opposition Green Party, told GlobalPost.

In the US, for-profit prisons hold 6 percent of state inmates and 16 percent of federal ones, according to the American Civil Liberties Union (ACLU). Proponents of privatization say the firms are saving governments money. But the ACLU has cited "numerous cases of violence and atrocious conditions" linked to some private facilities.

“Handing the care of refugees over to a private company, that's a huge mistake,” Korun said.

More from GlobalPost: A daily hustle to survive: This is the life of a Syrian refugee

Despite outrage about Traiskirchen from NGOs and many Austrians, ORS is doing well.

In response to questions from GlobalPost, ORS said it currently employs about 500 people and runs 22 camps for the federal government. (The Interior Ministry counts 38 camps, as it divides some locations into several sub-camps.)

The ministry confirmed that ORS gets 19 euros in public money for the care of each refugee per day, as would a nonprofit. The company is expected to provide basics like three meals a day; proper hygiene standards with a minimum amount of toilets and showers; and medical, legal and psychological care for those in need.

But rights experts charge that when the facility's occupancy was more than 250 percent, ORS wasn't fulfilling this basic care.

“We have taken a close look at this, because they [ORS] are getting a lot of money from us,” said Alexander Marakovits, spokesperson for the Interior Ministry. “We wouldn't give them this money if they didn't fulfill their duties,” he said. He added that the dramatic increase of the shelter's refugee population would have challenged any service provider.

ORS said the number of refugees sent to each camp was the responsibility of the government.

ORS's head of operations, Wilhelm Brunner, said that the number of refugees sent to each camp was the responsibility of the government.

“ORS and its staff members are, in this environment, endeavored to care for the asylum seekers as best as possible,” Brunner said.

Amnesty International disagreed: Although it would have been possible to take proper care of asylum seekers, the group said, their human rights regarding accommodation and management were violated. The rights monitor said it is preparing for another visit.

More from GlobalPost: The refugee girl who changed Merkel's mind: Where is she now?

Despite the conditions, ORS is only gaining in popularity with Austrian authorities.

As many as 85,000 people are expected to request asylum in the tiny Alpine nation by the end of the year — making the country, relative to its population of 8 million people, as much a refugee destination as neighboring Germany. New camps are popping up. Refugees sit beside their tents at the Traiskirchen camp.

According to the Interior Ministry, the contract with ORS stipulates that each new federal asylum-seeker center is to be operated by ORS. The enormous influx has meant an increase from 10 camps last year to 38 now.

Over the summer, ORS posted job ads and even hired interns at about $2,100 a month.

“In the past months, ORS has proven on multiple occasions that it is capable of ramping up accommodation … and most of all allocating qualified staff,” Brunner said.

But personnel have told local media a different story: Hardly anyone was qualified for the jobs they were doing, especially in education and social work.

More from GlobalPost: The biggest obstacle to European resettlement may be the refugees themselves

Some of Austria's provinces, which operate with autonomy similar to US states, have also awarded contracts to ORS.

Most recently, the mountainous province of Vorarlberg tasked ORS with running two new refugee camps. The decision was made right after conditions at Traiskirchen reached a low point. The camps are already operational, and a third is slated to open this month.

Despite taxpayer money being spent, the finances are relatively obscure. The Green Party's Korun has made several parliamentary inquiries to find out more.

In a response to one of Korun's inquiries, Interior Minister Johanna Mickl-Leitner admitted that ORS received not only the 19 euros (or about $21.50) per refugee per day, but a lump sum for each camp that ORS operates. Meanwhile, NGOs like Caritas, the country's largest relief organization, confirmed that they only received the 19 euros.

The ministry did not reveal the amount of the lump sum. A parliamentary inquiry is pending.

The first time a private company started handling camps for the government was in 2003. But after several incidents — one refugee died in Traiskirchen; another filed a complaint against a staffer who allegedly raped her — and meager financial returns, that company quit in 2011.

“In the interest of the taxpayer's money, we opted for ORS.”

In compliance with EU laws, the government announced requests for bids within the EU. A consortium of NGOs applied, but they were twice as expensive as ORS, Traiskirchen coordinator Ruscher said.

“In the interest of the taxpayer's money, we opted for ORS,” he said.

In Austria, Amnesty International and Caritas said, it doesn't matter if a private organization or a charity gets the contract, as long as the same standards apply for everyone.

At the moment, that doesn't appear to be the case.

The conditions inside were also obscured. During the summer, local media were in the dark about the Traiskirchen facility. Several local news outlets sought permission to report inside, but were turned away. Requests were said to be short on notice, or no one was available to show journalists around. Even Doctors Without Borders was denied access.

“The conditions inside are horrible. That's why you're not allowed inside,” Magd, a young refugee from Damascus, told GlobalPost during a recent visit to Traiskirchen.

Nowadays, many of the refugees have been processed and reassigned, and overall, the federal government and the powerful provincial governors have gotten a better grip on how to distribute the population. With 2,600 people, Traiskirchen is now 800 residents above capacity.

Conditions seemed to have improved when GlobalPost was granted rare access inside. Lunch portions — chicken, rice and a side salad — were more than generous. With temperatures above freezing point, GlobalPost witnessed the distribution of space heaters for those still sleeping in tents. The camp appeared to be clean and exceptionally orderly, and guards were ever-present. Little girls squealed happily as they glided on track rides.

Today, more people have been forced to leave their homes than at any other time since record-keeping began. Due to violent conflicts ravaging so much of the world, one out of every 122 humans is either on the run, internally displaced or seeking asylum. “If this were the population of a country, it would be the world's 24th biggest,” the UN's refugee agency found.

After expanding to Austria from its home turf of Switzerland, ORS has now also put down roots in the German state of Bavaria. Since August, ORS has been tasked with running refugee camps there. A regional spokesperson said that the state had already worked with private companies like security experts in the past, and was now simply entrusting one single company to handle all services.

Private companies prove in many cases to be more efficient than governments, proponents say.

But for critics, the worry remains the same: that financial interest comes before proper care for those in need.

“It's about human beings. A private company that's about profit won't care for them as well as an NGO, and that's in the nature of profit-oriented organizations: The less money they spend on care, the more will be left for them,” Korun said.

“For refugees, it's very dangerous to be under the care of such companies,” she said.