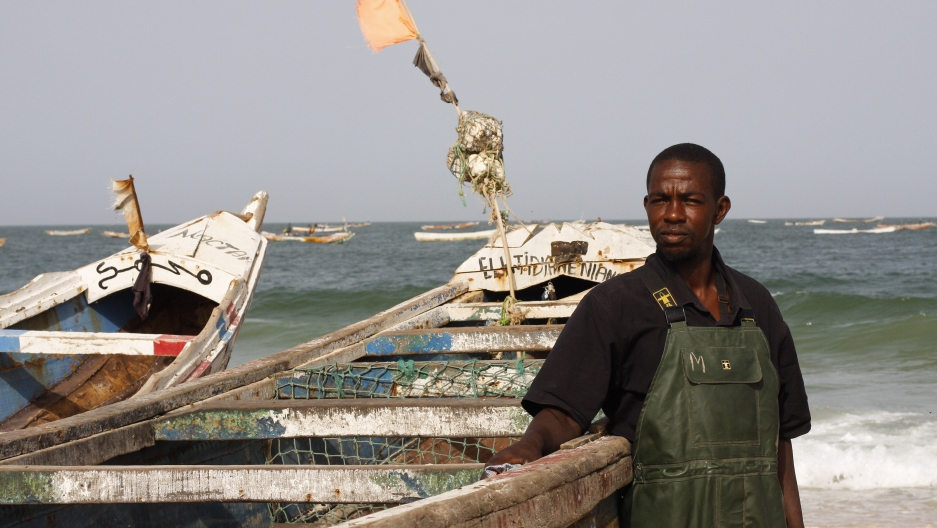 Samba Diallo, 42, a fisherman in Nouakchott, Mauritania, travels more than 20 miles out into the Atlantic on his traditional wooden boat known as a "pirogue" in order to catch fish.
Credit: Erin Conway-Smith
Share

NOUAKCHOTT, Mauritania — On a beach jammed with pirogues, the brightly painted wooden boats of West Africa, a crew of fishermen sing as they haul their vessel from the sea: “Thanks to God we have returned alive.”

While Mauritania is almost entirely a desert country, along its coast are some of the richest fishing grounds in the world. But canoe-like pirogues are little match for the enormous European and Asian trawlers that also ply these waters, pulling enormous hauls of fish and other seafood from the deep ocean.

Local fishermen complain that their catch is dwindling, and they must travel far out into the Atlantic, risking collisions with trawlers and other dangers at sea, in order to earn a living.

“Their boats are so big and they can't see us,” said Samba Diallo, a fisherman.

Diallo, 42, who has been fishing since he was a teenager, said his catch has been declining for years. He and four crewmates travel more than 20 miles from shore in their small boat, staying on the water for days and sleeping in shifts.

“It is a lot more difficult to find fish,” he said. “We have to go further and further.”

Waiting to head to sea.

Fishing is a critical part of the economy of Mauritania, an overwhelmingly poor country, as it is in neighboring Senegal and Guinea. International trawlers from countries including China, South Korea and Russia are drawn to the area because of declining fish stocks back home.

But conservationists warn that rapacious fishing practices there are threatening fisheries and food supply to a staggering degree. West Africa loses at least $1.3 billion a year from illegal, unreported and unregulated fishing, according to a 2014 report from the Africa Progress Panel.

“The livelihoods of artisanal fishing people are being destroyed, Africa is losing a vital source of protein and nutrition, and opportunities to enter higher value added areas of world trade are being lost,” the report said.

Greenpeace warned in May that “rogue” fishing vessels from China were pillaging the fisheries of West Africa. A two-year investigation by the group found that at least 74 boats owned by Chinese companies were fishing in prohibited West African waters and falsifying their gross tonnage.

“They were taking advantage of weak enforcement and supervision from local and Chinese authorities to the detriment of local fishermen and the environment,” said Rashid Kang, head of Greenpeace East Asia’s China Ocean Campaign.

On a good day, the hundreds of pirogues operating out of the ports of Nouakchott, Mauritania's capital, as well as Nouadhibou, the main commercial center, take a tiny fraction of the fish caught by the big international trawlers. According to a Greenpeace estimate, it would take 56 traditional pirogues a year to catch the volume of fish netted and processed by one of the super-trawlers in a single day.

Mauritania's President Mohamed Ould Abdel Aziz announced a new initiative in January, during his term as African Union chairman, that is aimed at bringing greater transparency to the global fishing industry.

"African governments have a potentially pivotal role to play in tackling the global issue of illegal fishing, but the international community must also take responsibility for combating the foreign boats that steal from African waters,” Aziz said at the time.

While the Fisheries Transparency Initiative — which is being developed in collaboration with Peter Eigen, a founder of Transparency International — has received praise, some campaigners question whether it will receive the broad political support necessary to be effective.

Diallo, the fisherman, said that he sometimes sees inspection boats out on the water. But more often he witnesses trawlers fishing where they aren’t supposed to: “The government should check more regularly," he said.

“The boats coming to fish aren't just taking the fish they need. They take other fish too,” Diallo added. “They are extinguishing the resources by this way of fishing.”