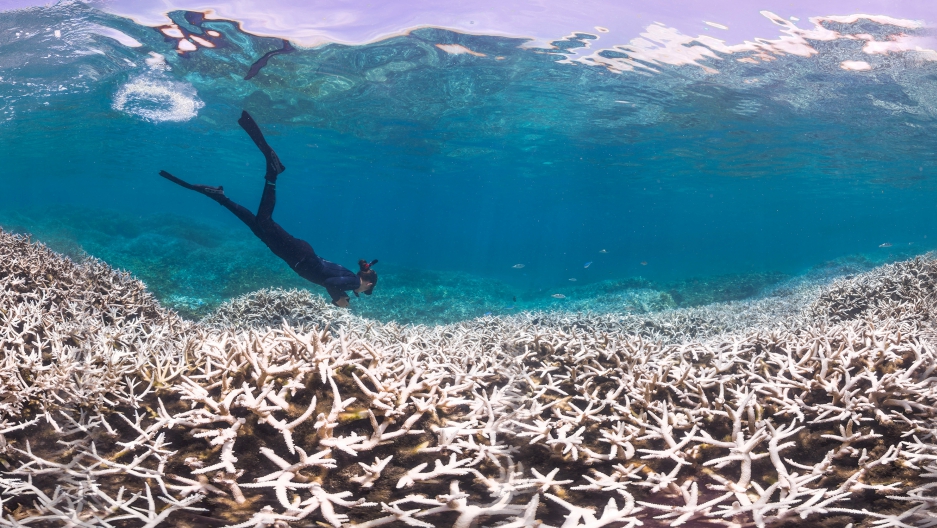 Marine biologist Alice Lawrence assesses coral bleaching at Airport Reef in American Samoa. Corals are currently experiencing a global bleaching event that couldlead to the death of five percent of the world's reefs.

A quarter of the world’s marine species depend on coral reefs for habitat. A half-billion people rely on them for their livelihoods or sustenance.

Researchers say we’re now in the midst of the third global coral bleaching event in less than 20 years. And that by the time it’s all played out, the world may have lost another 5 percent of its corals, with a murky future ahead for the rest.

The short-term culprit is the current El Niño event, the periodic warming of the eastern Pacific that roils weather and temperatures around the world. But the long-term culprit, according to Mark Eakin, who runs the Coral Reef Watch program at the National Oceanic and Atmospheric Administration, is climate change.

“It’s a matter of rate” of temperature change, Eakin says. The waters around them are just warming up too quickly for corals to adapt.

“Corals have adapted to live at the upper end of their temperature range so they can maximize the conditions in really warm water,” Eakin says. “But what we've been seeing in recent decades are events that drive temperature up above their tolerances, and this is been happening repeatedly. And then events like this El Niño can just tip them over the top.”

Corals live in intricate, symbiotic relationships with other creatures, especially microscopic algae that live right in their tissues. The warmer waters don’t actually affect the corals directly, but they put the algae into a sort of metabolic overdrive, which causes a cascade of problems.

“When the temperatures get too high, the photosynthesis in those algae actually runs too fast and they start leaking out toxic compounds,” Eakin says. Out of self-defense, he says, the corals eject the algae from their bodies, leaving the coral looking white, or bleached.

They’re still alive, he says, “but at this point to the coral has lost its main source of food and it's much more susceptible to disease.”

Eakin says the current global bleaching event began last year, and may not peak until next year.

“We are now in a really strong El Niño, and our climate models are making it look like 2016 may be even worse,” he says. “We may be looking at losing five percent of the world’s reefs permanently from this event.”

The increased stress from warming water comes on top of other, more local impacts on many of the world’s coral reefs, including ocean acidification from increasing atmospheric CO2, destructive fishing practices, run-off of pollutants, and habitat destruction.

So Eakin says it's “really essential that resource managers look at how they can reduce these other threats so the corals have the best chance of surviving.”

In the long term though, Eakin says events like the current global bleaching will only get worse without significant action to rein in the CO2 emissions that are pushing up global temperatures.

“If the corals themselves are healthy, they're much more likely to survive. And if the conditions on the reef are good for corals even if the corals die, new corals can arrive on the reef and grow and take her place,” Webster says.

And he says there’s a lot we can do to help make sure this happens.

“In the places where people are living near coral reefs, a lot of the things that people are doing … is stressing out corals,” Webster says. “If local communities can deal with those smaller conservation problems, it will create a lot of space for corals to grow and to adapt to the changing environment.”