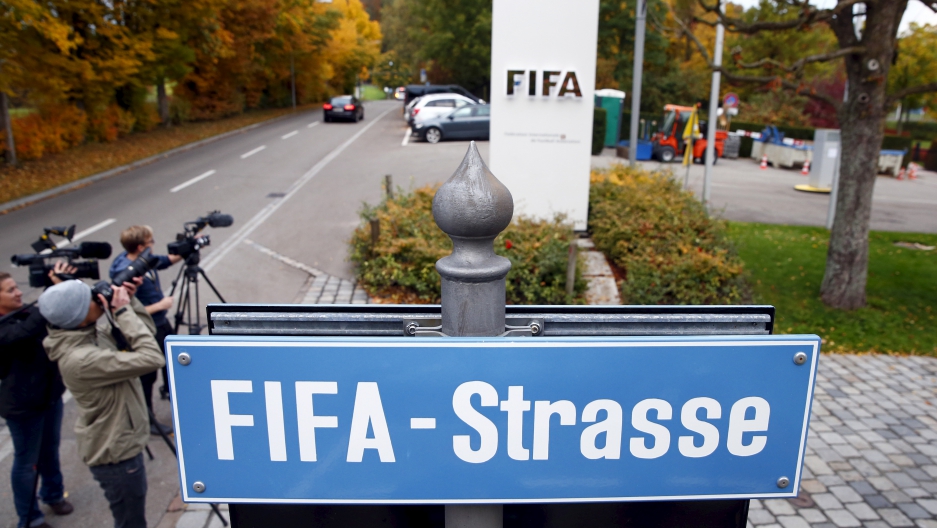 The sign marking "FIFA Street" outside their headquarters in Zurich.

Things are looking ugly for the beautiful game. Or at least for soccer's governing body, FIFA.

On Thursday, FIFA's own ethics committee suspended pretty much the whole organization's leadership.

President Sepp Blatter is banned from even setting foot inside FIFA’s glitzy Zurich headquarters for the next 90 days. So is his deputy, and two of the men who are running to succeed Blatter.

All of them are under investigation for corruption.

One man who survived the purge and will temporarily take over FIFA is Issa Hayatou. He's from Cameroon and he also leads the organization that governs soccer in Africa.

Blatter’s reputation in Africa is mixed. There’s disillusion with the corruption, and the damage to the game’s reputation that is found worldwide. But there’s also a lot of respect and gratitude for all Blatter has done for soccer in Africa.

“He was instrumental in ensuring that the World Cup came to Africa in 2010,” says South African sports journalist and BBC Cape Town correspondent Mohammed Allie.

“He’s seen by African football followers,” adds Allie, “as a man who certainly has done a lot for the game on the continent.”

Under his leadership, FIFA introduced a program of investing in infrastructure in every member nation, regardless of size and wealth. A disproportionate amount of that money has gone to Africa, and has led to first rate stadiums and even decent headquarters for national soccer associations.

But there is also criticism.

“Skeptics say that the money has always been there,” says Allie, “and needed to be spent, and in doing what he did with those programs, he certainly bought himself a patronage from the respective football associations on the African continent. Remember, Africa has 54 out of the 209 associates in FIFA, and those votes all count. Each country has the same vote — so Djibouti has the same vote as, say, Brazil.” Or the United States.

“There is consensus that the money has been well spent,” says Allie. “But some have likened it to taking money from a drug dealer and using it beneficially.”